While negotiators here in Lima enter their last two days of talks, Indonesia says it will be ready to begin receiving results-based payments for REDD+ by 2016. In a wide-ranging talk delivered late last night, the head of the country’s REDD+ Agency said it had not only finished its reference levels, but had implemented institutional reforms that would make REDD+ a reality. 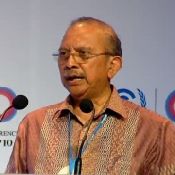 “By the end of 2017, Indonesia will be operationally and institutionally ready to implement its payments-for-results agenda,” said. “Right now, we’re developing the infrastructure, doing payments for performance, but by 2016, we promise our people and the world, that we will be earning payments for results in REDD+.”

He recapped in detail the successful implementation of programs that he outlined in an interview earlier, and expressed confidence that the reference levels submitted to the United Nations Framework Convention on Climate Change (UNFCCC) will be approved. He added, however, that the reference levels do not include carbon pools that have less certainty, and he stressed that more data would be forthcoming as the certainty surrounding those pools increases.

The actual reference level documents won’t be posted online after the climate talks end, but Nur Masripatin, the Deputy of Governance and Institutional Relations for BP REDD+, said they would include both deforestation and degradation, taking into account development policies in the future, and will include all forests that were still standing in 2000, including carbon-rich peatland forests.

“The data is quite traceable,” she said, reiterating Prasetyo’s confidence in the findings. “When the result is assessed, we can explain it.”

She said the country at one time had up to 14.9 million hectares of peatland forest, but the calculation includes just 8 million because of certainty reason on data availability and its associated emission estimates for the rest that had been deforested prior to 2000.

The submission, and Prasetyo’s vow, cap a massive undertaking that required pulling disparate data from several sources and making sure it was consistent across the country.

“There is so much data from different regions and institutions, and checking consistency was challenging,” she said. “Also, it was difficult getting different institutions to work together.”

“The reference levels are at the national level, but REDD+ has to be implemented at the grassroots level,” he said. “We developed a protocol for how the national and provincial and district and village levels work together in terms of achieving this.”

That protocol currently covers 59 districts in 11 forested provinces, ensuring that all participants will be “an orchestra that will sing together at the village, district provincial, and national level.