The Paiter-Suruí indigenous people of the Brazilian Amazon have long used modern tools to support their traditional way of life, and the cultivation of babassu nuts is part of that tradition. To help them improve productivity, Ecosystem Marketplace publisher Forest Trends recently contracted Finnish impact start-up GoSol Solar to install sun-powered driers that work by concentrating the sun’s heat on a drying shed. Here is a field report from GoSol’s Chief Design Officer. 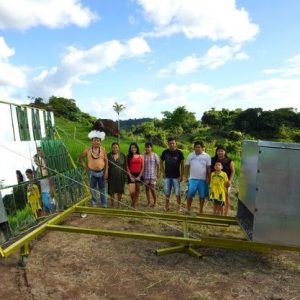 This piece first appeared on the GoSol Solar blog

21 December 2018 | After building the SOL5 solar concentrator and dehydrator in Cacoal, I was ready to take and install them for the Suruí people that live 3 hours down a bumpy off-road track on the edge of the Amazon jungle.

To give a bit of context. The specific Suruí family I was heading to visit live in an aldea (village) that consists of two big houses, a family in each. They are all Suruí, the father of the village lives in one house with his family and one of his older sons and his family live in the other. They explained that when a couple get together they can make a new village in the forest for themselves and build a house there or if all parties agree they can build in a village they already live in. Very cool because they can chose to build a house anywhere on their indigenous territory for free.

This has been their territory since before first contact in 1968. Now they live on 600,000 acres of protected land and forest.

Solar dehydration is needed in the Amazon

Now that I had the SOL5 and dehydrator built the next step was getting them to the Suruí on the edge of the jungle and using them to dehydrate the babassu nut. As per my first post it currently takes them 4 days to dry the babassu on the ground under the sun. We are trying to raise the ambient temperature from around 30°C to between 50°C and 60°C in the dehydrator to speed up the drying process. Any more and the heat would start to cook the nut instead of dehydrate it.

To be specific, the part of the nut they dehydrate is the “mesocarpo”, the flesh or pith of the nut. They use the dehydrated mesocarpo to make flour and bread. They sell both in local markets and eat some of the bread they make too.

I got the SOL5 & dehydrator installed in the aldea. There are always unforeseen obstacles in the way and this time it was that the aldea was on the side of a hill and the SOL5 needs a flat area where it can be installed and rotate to follow the sun. Luckily it didn’t seem to be a problem as once the Suruí understood the situation they promptly started working a space and digging and moving earth from a high to low ground to create an area for installation. At the same time me and a couple other Suruí guys got to work preparing the SOL5 for installation. A day later we where up and running!

Going into the Jungle

At this point the project had come together nicely. The only thing left was to get some babassu mesocarpo to dehydrate. When I asked about this they said they did not have any fresh babassu at the time. It’s the rainy season so they are not drying the babassu at the moment. They dry the babassu between April and October when there is much less rain. But they said we could go and get some fresh babassu to try out the dehydrator and this means a 12km trip into the jungle to get it; 11km by motorbike followed by a river crossing on a boat they have out there followed by a 1km walk to the babassu trees and fresh babassu nuts that have fallen to the jungle floor. I could feel the adrenaline pumping though me at the thought of going 12km deep into the jungle!

The plan was to go the next day. Witch we did but as it was rainy season there were many fallen trees along the trail and the river had risen flooding our path to where to boat was moored. So it was a much longer adventure that we expected but we got there in the end as you can see in the short clip at the end of the post.

The next day I had to leave. I was sad to leave them, the jungle and the solar concentrator. It was very nice getting to know the Suruí indigenous people and it was exciting and an adrenaline rush to go into the jungle! It’s also very exciting to see if what we have achieved and proved in East Africa could replicate in the Amazon context so I look forward to getting the first data collected, building more units and training more people so they can get more outcome from the solar concentrator to improve their livelihood.

It’s the rainy season out there at the moment so there was not one dry day during my stay but after I left, they got a day of sun and started to dehydrated mesocarpo as we can see in the short clip they sent. They used the SOL5 from 9:30 to 15:00, shortening the drying time from 4 days to 5 and a half hours!

They’ll now reinforce the ground with gravel stones to make it flatter and less soft.

Will Cleaver is Chief Design Officer for GoSol Solar.