Indigenous people – and forest people in general – have long been among the planet’s most responsible stewards of the land. They’ve contributed the least to the global climate crisis, yet will suffer the most from its effects. REDD offers a way to rectify this injustice – and here’s how some indigenous leaders hope to make it work. 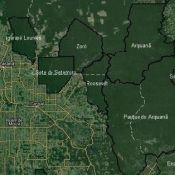 15 January 2015 | On a daily basis in the dry season, flat-bed trucks rumble up an offshoot of Brazil’s Highway 364 laden with dead trees illegally ripped from the Zoró Indigenous Territory, which lies at the southern edge of the Brazilian Amazon. The bounty includes old-growth teak and mahogany destined for luxury furniture showrooms across Brazil and around the world.

The finished wood from a single mahogany trunk can fetch tens of thousands of dollars, but only a few pennies of that will go to members of the Zoró indigenous people, who make their money by illegally escorting loggers to the most productive parts of their forest. It’s a practice that many Zoró say they’d rather abandon, but they see no choice if they’re to feed their families.

After leaving the Zoró territory, the trucks pass along the northern edge of the Sete de Setembro territory, where the Paiter-Surui community once logged just as aggressively as the Zoró do today.

“We had survived for centuries by nurturing the forest, but to survive in the modern market economy, we had to let outsiders come in and chop the mahogany and teak,” says Almir Narayamoga Surui, chief of the Paiter-Surui people. “As the trees fell, the birds went silent, the animals and fish retreated, and our people lost their way.”

But that changed dramatically over the past five years, as most of his people voted to give up logging. Instead, they tapped into financing for “REDD” (Reduced Emissions from Deforestation, Degradation) to earn carbon offsets by saving their forest – becoming the first indigenous people to do so. Income from the offsets they sell is being used to jump-start a 50-Year Development Plan that builds a sustainable economy on non-timber forest products like Brazil nuts and acai berries, as well as sustainable fisheries and ecotourism.

The Rise and Limits of REDD

The Surui Forest Carbon Project is one of hundreds of REDD projects around the world, according to the latest Ecosystem Marketplace State of Forest Carbon Markets Report. But what worked for the Paiter-Surui might not work for all indigenous territories facing dire threats from deforestation – as one would find if they followed those same logging trucks out of the Sete de Setembro territory and through the southern tip of the Igarapé Lourdes territory.

This is home to two other people: the Gavião and some of the Arara, both of whom have so far resisted the siren song of logging. But illegal incursions have been taking place along the road, and the people of Igarapé Lourdes also face financial challenges: health-care costs are skyrocketing, and they need money as much as the Paiter-Surui and Zoró do.

REDD could, in theory, help them address their needs and keep illegal logging at bay, but to earn REDD offsets, they’ll have to prove two things: first, that their forest is under immediate threat, and second, that they will only be able to save it as a result of the money they receive for their REDD efforts (a concept known as “additionality” in REDD parlance).

For Peruvian indigenous leader Juan-Carlos Jintiach, the additionality requirement is one of REDD’s great flaws. Created to prevent greenwashing and make REDD more rigorous, he says it punishes those people who have traditionally been good stewards of the land.

“All across the Amazon, indigenous people are crying out for help to defend the forest,” says Jintiach. “But because they had no deforestation, they have no access to REDD finance.”

Jintiach is the former head of COICA (Coordinadora de las Organizaciones Indígenas de la Cuenca Amazónica / Coordinator of Indigenous Organizations of the Amazon River Basin), which is a Lima-based federation of indigenous organizations across Latin America, and he thinks he has an answer.

The Arc of Deforestation and the Dawn of Indigenous REDD

After passing through Igarapé Lourdes, log-laden trucks leave the indigenous territories and rumble out into the dusty terrain beyond – where cattle graze land that’s far more depleted than even the Zoró territory, a veritable Eden compared to the farms and fields around it, even though it’s badly degraded by indigenous standards.

Sixty years ago, the Zoró, the Paiter-Surui, the Gavião and the Arara were isolated people of the Amazon, but today they’re at ground zero of the Arc of Deforestation – a boomerang-shaped band of destruction that sprawls across the southern and eastern edges of the Amazon Rainforest, representing the frontier of what was, just a century ago, a vast and unspoiled forest.

The Arc of Deforestation stretches from the port city of Belém at the mouth of the Amazon to Brazil’s border with Bolivia.

It’s a region of vital importance to the global climate, because indigenous territories of the Amazon hold nearly 30 billion tons of carbon, which would become 110 billion tons of carbon dioxide if it made its way into the atmosphere. That’s a real possibility, because more than half of those trees are in danger of being destroyed, according to research by the Environmental Defense Fund, the Woods Hole Research Center, and COICA.

In a paper entitled Forest Carbon in Amazonia: The Unrecognized Contributions of Indigenous Territories and Protected Natural Areas, the three NGOs looked at current threats, like the expansion of access roads and the encroachment of ranchers, and concluded that roughly one-third of indigenous and protected territories are under “immediate threat” from illegal logging, mining, dams, and agriculture, while an additional one-fifth are under “near-term” threat.

Seen from above, indigenous territories in the Arc of Deforestation appear as islands of emerald in seas of gray-green degradation. It’s as stark an illustration as you’ll find of the vital role that indigenous people play as guardians of the rainforest, but it’s a role that takes its toll on the people themselves. The Sete de Setembro territory is in the center, with Igarape Lourdes to the northwest and the Zoro territory to the northeast.

“Think about all the mega projects that are going to be developed,” says Jintiach. “We know what´s going to happen — islands of deforestation, contamination, and criminal activities – but we, the indigenous people of the Amazon, have an answer.”

Specifically, Jintiach and the current COICA leadership are spearheading the creation of a new mechanism to finance “Indigenous REDD+” (REDD+ Indígena Amazónico, or “RIA”), which aims to adapt financing for mechanisms like REDD+ (which not only saves endangered forest but leverages sustainable forest management to avoid deforestation) to existing indigenous practices that have worked for centuries and then apply them in support of government-led initiatives like Brazil’s National Climate Change Plan. This plan is part of a national policy that established official Amazon deforestation targets of 80 percent by 2020.

It’s an ambitious undertaking that draws on lessons from private conservation initiatives in the Amazon, global efforts underway within the United Nations and even efforts by corporate giants to get deforestation out of their supply chains.

But to understand how REDD works on a grand scale, it helps to see how it works at the project level.

Christopher Pollon is a freelance writer based in Canada.