Most indigenous people have resisted the temptation to chop their forests for gain leaving them short of development largesse, but also in the lurch when it comes to financing programs aimed at saving forests that are clearly in danger. Now a new peer-reviewed paper says more than half the land under indigenous protection is, in fact, endangered and indigenous leaders say REDD finance can help them avert disaster. 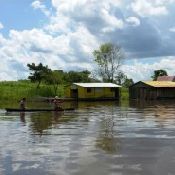 3 December 2014 | LIMA | Peru | “All across the Amazon, the only thing standing between forests and destruction is us, the people of the forest,” said Jorge Furagaro of COICA (Coordinadora de las Organizaciones Ind­genas de la Cuenca Amaz³nica, Coordinator of Indigenous Organizations of the Amazon River Basin), a federation of indigenous people across Latin America, as he presented the findings of a peer-reviewed paper appearing in the academic journal Carbon Management.

Entitled “Forest Carbon in Amazonia: The Unrecognized Contributions of Indigenous Territories and Protected Natural Areas“, the paper says that trees on indigenous and protected lands store more than half of the carbon content of the Amazon, but that more than half of those trees are in danger of being destroyed, while roughly 14% of indigenous territories have still not been officially demarcated. The findings bolster the case for ramping up the demarcation of indigenous lands and of using REDD (Reducing Emissions from Deforestation and Degradation) finance to support indigenous protection efforts.

“All across the Amazon, we have indigenous people crying out for help to defend the forest,” said COICA Coordinator, Juan-Carlos Jintiac. “But because they had no deforestation, they had no access to REDD finance. Now we see that their forests are in danger, and they have earned support.”

While national reference levels focus on historic rates of deforestation, the paper looks at current threats and concludes that roughly one-third of indigenous and protected territories are under “immediate threat” from illegal logging, mining, dams, and agriculture, while an additional fifth are under “near-term” threat.

“Our knowledge and awareness is changing every day,” said Furagaro. “In Colombia, we thought that old forests would not sequestrate as much carbon as young ones, but now we know just the opposite is true.”

The Amazonia Network of Georeferenced Socio-Environmental Information (RAISG, Red Amaz³nica de Informaci³n Socioambiental Georreferencia) has incorporated the findings into a map, which is available online here, with explanations in Spanish, English, and Portuguese.

The Need for Demarcation

Indigenous leaders used the occasion of the paper’s release to renew calls for demarcation of their lands.

“We now have evidence that there are strong rights, there are standing forests,” said COICA President Edwin V¡squez, who co-authored the paper. “Knowing that we have more than half of the region’s carbon on indigenous and protected lands, we can tell our leaders so they can strengthen the role and the rights of indigenous forest peoples.”

In a separate session later in the day, Jintiac and indigenous leaders from the Amarakaeri and Shuar people outlined their “Life Plans”, which are blueprints for long-term sustainable growth across the Amazon. Most indigenous people have developed such plans over the past decade, but they lack the funding to get them off the ground.

“If you look at what REDD does and you look at Life Plans, their objectives are basically the same,” said Jintiac.

In a Wednesday session, representatives from the Amarakaeri Communal Reserve of Peru and the Federaci³n Nativa del R­o Madre de Dios y Afluentes (FENAMAD) will offer details of a new methodology that uses Life Plans as a benchmark in the success of REDD.

The role of indigenous people and REDD is emerging as a central theme of talks in Lima, and Furagaro said it may very well take a different shape in different parts of the region.

“It’s difficult to say that there is a comprehensive policy towards the Amazonian Indigenous REDD, since the government of each country is different,” he said. “The strength of different initiatives depends on the political and negotiating capacity of the indigenous communities and the state.”