Seven years ago, indigenous people were seldom seen and even more seldom heard at global climate talks. Today, they’re actively involved in talks, with organizations like AIDESEP and COICA ensuring that indigenous practices are a part of forest-related solutions implemented under the Paris Climate Agreement. 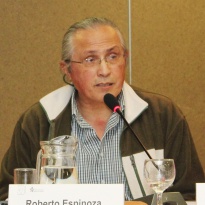 16 May 2017 | BONN | Germany | For years, it seemed that Juan-Carlos Jintiach was the lone indigenous voice speaking for the people of the Amazon at global climate talks. As leader of an indigenous organization called COICA (Coordinator of the Indigenous Organizations of the Amazon Basin), he seemed to be on every panel that needed indigenous participation.

Today, he’s one of many indigenous voices at mid-year climate talks in Bonn – along with Jorge Furagaro Kuetgaje and Josien Tokoe of COICA and Roberto Espinoza of AIDESEP, which stands for Asociación Interétnica de Desarrollo de la Selva Peruana, or “The Interethnic Association for the Development of the Peruvian Rainforest”.

AIDESEP is an umbrella organization representing 109 indigenous federations that in turn represent 1,800 indigenous communities and 350,000 people; and over the last six years, they’ve stepped up as to make sure that indigenous stewardship is recognized in those parts of the Paris Climate Agreement that support forests – specifically “REDD+” (Reducing Emissions from Deforestation and Degradation of forests, plus other land uses), which uses carbon finance to support endangered forests.

Espinoza says REDD+ got his people involved in the climate talks, but not willingly at first.

“My first exposure to REDD wasn’t good,” he says. “Carbon pirates brought the concept to us – opportunists who thought they were going to get rich because of our good stewardship of the forest.”

While these “pirates” – usually called “carbon cowboys” in English – were few in number, they sent a ripple of distrust throughout indigenous communities.

As Jintiach and Espinoza began investigating REDD+ and the idea of developing carbon offset projects, however, they saw governments and many NGO´s were interested and involved in the process of establishing carbon markets that included REDD+ projects.

“I was reticent, but then we saw governments and NGOs getting prepared and coming up with REDD proposals,” Espinoza says. “It became something we needed to participate in.”

Today, he is a leading proponent of “REDD Indigena Amazonico (RIA)”, which AIDESEP initiated in 2010. It’s built on the premise that indigenous people are proven good stewards of the land, and that the international community should recognize their “life plans” – strategic land management plans – as REDD+ activities supported under the Paris Agreement, which should help them receive funding and other forms of support.

By 2011, COICA and other indigenous organizations endorsed indigenous REDD and they continue to promote it at global climate talks.

As Espinoza advocated for forest peoples’ involvement in REDD+ activities, he also concluded climate negotiations may need an indigenous voice other than from COICA.

“COICA was doing a good job representing us, but that’s not the same as being there in person,” he explains. “In 2011, when the talks were in Durban, we decided to send other representatives who could speak independently of COICA´s involvement.”

After a steep learning curve, Espinoza and other indigenous leaders made their voices heard.

“We emphasized the creation of a specific indigenous people mechanism, which is a climate funds platform under indigenous leadership,” he says.

When climate talks came to Lima in 2014, AIDESEP and COICA argued for and received an indigenous pavilion, where 300 leaders from Peru and more than 100 from across the Amazon participated for the first time.

“Then Peru’s climate action plan appeared, and under this umbrella an indigenous component was settled. In each and every part, the indigenous participation and input are related to territorial titling, management and governance.”

The Indigenous pavilion remains a staple of climate talks, but its profile has diminished – partly because of travel costs, but also because leaders have become more savvy and low-key. Internal disagreement among indigenous organizations over the use of REDD+ also weakens their influence as does the world’s overall disagreement about REDD+ and how nations should implement it. Though, Espinoza thinks the biggest problem is location: it isn’t in the “blue zone,” the political center of the talks and where the negotiations take place.

Espinoza says the pavilion could be more influential if it were located closer to the action.

“It would be stronger and more active because many (country) delegates are interested in indigenous issues but they can’t interrupt meetings and leave the blue zone to go to the other side,” he says.

The pavilion’s placement may highlight the limited view the world still has of indigenous peoples and their ability to aid in the fight against climate change, he adds.

Though the pavilion is still very much a presence at the conference and at the 2016 talks in Marrakesh, Morocco the indigenous associations introduced four proposals:

“These are based on Peru´s own conditions, but they can be applied elsewhere,” says Espinoza. “They can be discussed in a global panel, they will also provide a reality check with what´s going on in other parts of the world.”

Espinoza admits the uncertainty in the US over whether the Donald Trump administration will keep the country in the Paris Agreement is a grave concern and carries deep ramifications for indigenous issues as well.

Nevertheless, the work continues in Bonn. The German Federal Enterprise for International Cooperation (GIZ) has already provided support to expand RIA into those 12 Peruvian territories.