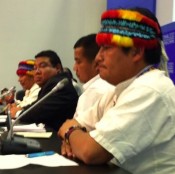 They said, however, that carbon markets might not be the best way to access funding and argued for a more holistic, ecosystem-oriented approach based on acreage of living forest combined with REDD-style carbon stock-taking. They also argued against the long-term obligations that most carbon contratcs require, and in favor of shorter-term contracts offering indigenous groups that engage in REDD the flexibility to adapt their projects over time.

The “Indigenous REDD” effort emerged in 2011 and is being spearheaded by the Coordinator of Indigenous Organizations of the Amazon Basin (COICA), which coordinates nine national indigenous organizations spread across the Amazon. It aims to incorporate REDD into the emerging “Life Plans” being developed by indigenous groups across the Amazon. Such plans, like the one that sparked the creation of the Surui REDD Project, map out decades-long paths to prosperity and independence for indigenous peoples.

“Indigenous peoples have proven themselves good stewards of the land, and are already taking care of more than 200 million hectares,” said Roberto Espinoza Llano, the project’s technical coordinator. “Still, more than four million hectares of indigenous rainforest is in danger, and REDD can help save it.”

He argued, however, that biomass-based valuations like those employed in REDD tend to undervalue ecosystems, and he expressed skepticism in the ability of safeguards to protect cultural values and biodiversity. Indigenous REDD, he said, aims to develop alternate financing mechanisms that recognize biodiversity and ecosystem health as a core value rather than a co-benefit.

“Long before REDD was invented, indigenous people were managing and conserving the forest,” he says.   “They did so by taking a holistic approach to forest management – and that’s what we want to bring to REDD.”

The Swiss government is a major funder of the Indigenous REDD initiative, and Keith Anderson, Forest & Climate Policy Officer for the Swiss Federal Office for the Environment, said that Indigenous REDD might appeal to development-minded donors.

“The proposals they outlined might not fit into a general understudying of REDD,” he said. “They are, however, synergistic with government plans for sustainable development.”

Espinoza said potential funding streams and mechanisms would be explored in more detail on Amazon Day, which takes place in Hall 5, room 2 of the Doha National Convention Center on Saturday, December 1.

He adds, however, that only three countries – Ecuador, Columbia, and Brazil – recognize such tenure at the constitutional level, and said that REDD projects of any kind should only proceed if those rights are clear. He said that COICA aimed to use REDD as a way of making those rights clear.

Others talked of the need for more information and more involvement on the part of indigenous leaders in REDD.

“Every one of the indigenous leaders who took part said the workshops were too short,” said Gregario Cascante of Venezuela’s Organizacií³n de los Pueblos Indí­genas del Amazonas (Organization of Indigenous Peoples of the Amazon, “ORPIA”).

Sonia Guajajara of Coordenaçí£o das Organizaçíµes Indí­genas da Amazí´nia Brasileira (Coordination of the Indigenous Organizations of the Brazilian Amazon, “COIAB”) said that the emerging practice of free, prior, and informed consent (FPIC) brought indigenous people into the REDD process too late, and argued for more early-stage involvement.

“Given our history in the forest, our role should go beyond accepting or rejecting REDD,” she said. “We should be actively formulating the national forest strategy.”

Three Years In the Making

The “Indigenous REDD” initiative emerged from a series of five-day workshops held over a three-year period, beginning in early 2010 in Ecuador. The aim was to hold three per year, for three years – one in each of the COICA nations, says Jintiach. The last workshop is slated for next year in French Guyana.

Each workshop lasted five days – three days in classrooms and two in the field with small group of just 20 to 25.

“As we moved from the controversial to the positive, we realized that we were movng towards REDD, but towards a uniquely indigenous approach,” said Espinoza.

The workshops focused on bosed market-based and non-market based financing opetions.

“We started out with the basics on climate change and what was going on locally in the country … and then got more into the details of what specifically a REDD project looks like on the ground,” he says. “We offered some briefings about the Forest Carbon Partnership Facility, the Forest Investment Programme, and UN-REDD, and the private sector was invited as well.”

Steve Zwick is Managing Editor of Ecosystem Marketplace. He can be reached at [email protected]
Please see our Reprint Guidelines for details on republishing our articles.