The indigenous people within the Amarakaeri Communal Reserve live along the border between Brazil and Peru, and they also act as a buffer between uncontacted people of the Amazon and the outside world. At climate talks in Marrakesh, they reiterated their openness to forest carbon projects that support their way of life – but only if that support is assured. 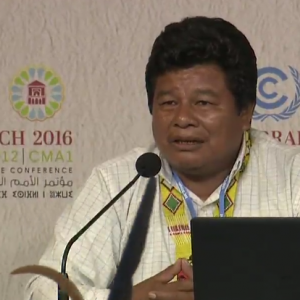 13 November 2016 | “REDD+ isn’t going ahead if the basic rights of indigenous peoples aren’t observed,” said Edwin Llauta, of the indigenous organization, Eca-Amarakaeri, which administers the Amarakaeri Communal Reserve (ACR), during year-end climate talks taking place in Marrakesh, Morocco this week and next.

“REDD+” stands for “Reducing Emissions from Deforestation and Degradation of forests, plus other land uses”, and it represents a body of practices designed to save endangered rainforest by funneling carbon finance into conservation. It was enshrined in the Paris Agreement last year, and being refined in Marrakesh this year.

The ACR is located in Peru’s southeastern part in the Madre de Dios region and it consists of three indigenous peoples, the Harakbut, Yime and Matsiguenka, spread out over 10 communities. Llauta refers to their territory as a “paradise bank,” that provides the people all that they need.

However, these groups have struggled economically, as many indigenous peoples do, as they try to fend off lucrative but forest-destroying extractive activities and carve out a sustainable existence. REDD+ can provide much-needed finance, funding sustainable livelihoods and helping to implement indigenous “Life Plans,” which are blueprints for long-term sustainable growth.

Eca Amarakaeri is in favor of REDD, so long as indigenous peoples are involved and benefiting from the program.

The organization is involved in what’s known as Indigenous REDD, which seeks to ensure indigenous rights and includes cultural provisions alongside forest conservation that mitigates climate change. Securing forests and indigenous rights are a good climate mitigation strategy, according to research by the World Resources Institute, Woods Hole Research Center and the Rights and Resources Initiative. Forest communities are among the best stewards of land and the tropical forestland they manage contains nearly 55,000 million metric tons of carbon. Deforestation rates inside forests legally managed by indigenous peoples and communities are two to three times lower than in other forests, Katie Reytar and Peter Veit of WRI write in a blog post.

“We have the essential knowledge for saving the planet,” said Llauta, noting progress as some countries have accepted their REDD+ proposal. However, corruption and a lack of funds continue to stall indigenous land rights and forest protection, he added.

“We have experienced contradictory policies and politics, and we haven’t been able to ensure certain land titling to indigenous peoples. It’s only recently that the state has recognized the importance of the indigenous movement,” Klaus Quique, of the regional indigenous organization FENAMAD, said.

Eca-Amarakaeri has been able to proceed with implementing their REDD program, Quique said.

One thought on “In Marrakesh, Amarakaeri People Say REDD+ And Rights Must Go Together”