The Green New Deal has won praise for highlighting the upside of meeting the climate challenge, but critics say cap-and-trade will deliver the same benefits without the confusion. In the Chesapeake Bay, a similar debate is playing out on water pollution, and a simple cap seems to support multiple benefits. 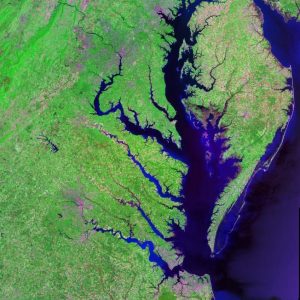 21 October 2019 | People have been harvesting clams, crabs and fish from the massive and fertile Chesapeake Bay since the end of the last ice age, and its name appears to come from an Algonquin word meaning “great water,” although the exact etymology is a matter of conjecture.

No one, however, disputes the bounty that Europeans found when they arrived in the 1500s – and which continued up until the 1970s, when agricultural runoff had spawned algae blooms that were already suffocating the shellfish that are the Bay’s defining fauna.

But cleaning up the Bay proved challenging, mostly because it’s fed by 150 rivers and waterways which are regulated by six different US states as well as Washington, DC and the federal government. That’s eight different jurisdictions, each with a different objective and approach, so while some states prioritized the revitalization of oyster beds and others the restoration of specific riparian habitat, no two had the exact same measure of success.

That changed in 2010, when the federal government imposed a specific limit on the total amounts of nitrogen (185.9 million pounds), phosphorous (12.5 million pounds) and sediment (6.45 billion pounds) that the Bay can handle per year, with a target compliance date of 2025 and progress being evaluated and adjusted every two years.

The limit, technically called a mandatory Total Maximum Daily Load (TMDL), applies to all water pollution, which means regulators must find ways of reducing discharges from both point sources, such as waste treatment plants, and nonpoint sources, such as farms and fields. The seven jurisdictions worked together to create individual Watershed Implementation Plans (WIPs) under the Chesapeake Bay Watershed Agreemen, which established 10 goals and 31 verifiable outcomes, including specific localized TMDLs.

While some states are struggling to meet their targets, Maryland isn’t one of them. The state is not only meeting its targets, but doing so in ways that deliver benefits beyond just clean water.

Gabe Cohee, a Restoration Finance Director for the Maryland Department of Natural Resources, cited six factors in its success: the clarity of the target, the standardized approach for meeting it, the focus on staying current with best practices, the flexibility given to local authorities, and the awareness generated across the Bay by several NGOs and state agencies.

Payments for Activities and Results

Cohee says the imposition of a TMDL provides a clear target, which guides the dispersal of federal funding granted through the Chesapeake and Atlantic Coastal Bays Trust Fund.

The fund contributes roughly $50 million per year towards the reduction of nonpoint source pollution runoff into the Bay. Of that, $24 million goes directly to farmers and agricultural technical assistance for specific activities like planting cover crops or moving manure away from the water’s edge. The remainder, roughly $26 million per year, finances local efforts to reduce runoff, primarily through ecological restoration.

The Fund receives requests for more than $70 million per year and actively encourages the submission of new proposals. Grants are awarded based primarily on TMDL projections, but also on co-benefits such as habitat restoration or positive social impacts.

“We don’t want to be in a position where we’re just throwing gabion baskets and imbricated rock into streams to reduce sediment while missing opportunities to enhance habitat and restore functional stream systems,” he says. “On the other hand, there’s a tendency for these funds to get so watered down and spread so thinly that the impact is lost, and we need to guard against that.”

Scientific uncertainty is addressed through constant engagement with the scientific community, at both the state and federal level. The federal program, for example, creates Goal Implementation Teams (GITs), with representation from each state, to develop management strategies based on best management practices that are constantly updated. Local implementers utilize an online system called FieldDoc, which utilizes GIT-approved algorithms to ascertain the environmental impact (nutrients and sediments reduced) of their project and inform funders to make cost-effective, efficient funding decisions. In this way, real-world experiences with emerging models are shared across all implementers, and a scientific advisory panel also provides annual updates on new developments in water management.

FieldDoc also provides a way for prospective project developers to formulate proposals before applying for state funding. Specifically, anyone looking to submit a project can first model their proposed intervention using field data and methodologies available on FieldDoc. Modeling can be done for both TMDLs and co-benefits. By standardizing both the proposals and the evaluation procedures through FieldDoc, water authorities can compare and contrast proposals, outcomes and discharge-reduction costs across the watershed.

The cost of meeting the TMDLs varies widely by site and applied management practices.

Operational risk is generally handled by working closely with project developers in the design phase to ensure that known geographical idiosyncrasies are incorporated using the latest science, and then adapting to unforeseen disruptions on a case-by-case basis.

“Something always goes wrong, like the discovery of unknown infrastructure in the development area, and most of the groups developing these projects are watershed organizations or community groups without deep bankrolls for risk,” says Cohee, adding that the Fund shares some of the risk by providing up-front funding, but does not cover unforeseen costs unrelated to the deliverables of the investment.

Projects are selected by a multi-agency review team that evaluates and chooses fundable projects, which means that roughly 50 reviewers weigh in on the project before it is approved. Then a smaller six-person team evaluates progress through site visits and quarterly reports from the grantee. When projects encounter unforeseen challenges, the teams can freeze the project and determine whether to proceed or to end the program, resulting in a lower payout for reduced implementation.

At least one of the projects embedded in the system follows a “pay for success” model, and that is the Principio Restoration Project, located on a dairy farm in a sub-watershed called Principio Creek. The project is being spearheaded by the Cecil Land Trust, which negotiated a permanent easement with the Horst Brothers Dairy Farm. This project differs from all others in the Fund portfolio in that the state only makes payments after the project has been fully built and objectives are met. The project developers are operating on a for-profit basis; they are carrying all of the risk, but hope to earn a profit by reducing discharges at a lower cost than the payment they earn from the state.

Specifically, all up-front funding is coming from investors in the for-profit restoration group Ecosystem Investment Partners (EIP), which is restoring 8,215 linear feet of streams and 24.8 acres of riparian buffers, with the aim of reducing discharges of nitrogen by 6,219 pounds per year, discharges of phosphorous by 1,850 pounds per year, and suspended sediment by 1,344 tons. EIP hopes to turn a profit at the end of the project by selling discharge reduction units to the Fund at a rate of $800 each – or less than half the current average cost across the watershed.

“It reduces our costs and our risk, while freeing the government workers up a bit on the capacity side,” says Cohee.

Because the final payment is based purely on discharge-reductions verified in-stream, the state does not have to worry about paying out large sums for a reduced implementation if something goes wrong.

Such projects, unfortunately, are rare – largely because investors are unwilling to take the associated performance risk and regulatory risk. Specifically, investors are looking for returns of 20 percent and up for risk they understand, and will seek higher returns for risks they are unfamiliar with. According to mitigation bankers interviewed for this survey, investors don’t trust the US regulatory regime to be consistent, so they don’t invest the time needed to understand the landscape.

The Fund currently receives nearly three-times as many proposals as it can finance, but Cohee says it took nearly five years for the Fund, working with the Chesapeake Bay Trust, to build up that pipeline.

“We started by identifying areas that had the highest sediment loads and publicizing the assessments so that people knew the issue,” he says. “We played matchmaker – getting consulting companies to work with watershed organizations or local governments, and getting people talking about pinch points and problems and solutions, and gradually we started seeing proposals that gave the funders in the state a lot of confidence.”

This story is the fourth in a series of articles we’re rolling out to support the Environmental Markets and Finance Summit, which takes place in Washington, DC from the 29th through the 31st of October. Co-hosted by Ecosystem Marketplace, the summit will explore ways of scaling up successful environmental solutions and abandoning unsuccessful ones.

When it comes to environmental solutions, the question too few people ask is, “How will you pay for it?”
It’s a critical question, because all environmental problems are, at heart, economic problems. Indeed, if the cost of environmental degradation were embedded in the cost of production, we’d have met the climate challenge years ago.
Ecosystem Marketplace has been covering the nitty-gritty and wonky (but oh, so important) issue of how you pay for it since 2005 – and never with a paywall. But generating high-quality content is hard work, and it’s clear to us that we’ll need more resources if we’re to continue shining a light on these important issues.
If you like our stories and want to see more of them, then help us out, with either a one-time payment or an ongoing subscription here: