Destroying refrigerant gases that have been phased out of production due to the Montreal Protocol has been a significant base for carbon offsetting in California’s cap-and-trade program. But as a recent trip to a recycling center in Compton, California showed, the process has to start somewhere. 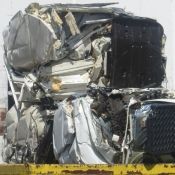 13 July 2015 I That old refrigerator you had out in the garage cooling your beer on the Fourth of July? It could be leaking R-12 – more commonly known as Freon – and probably should be taken out of commission. In fact, many ancient refrigerators using the gas are being dismantled, with the help of the California carbon market.

These old refrigerators often end up at Appliance Recycling Centers of America’s (ARCA) Compton, California facility, where a small group of attendees of the Navigating the American Carbon World conference in May donned safety glasses and ear plugs to watch them being sliced into pieces on a guided tour led by Jeff Woloz, Vice President and General Manager of ARCA’s California operation.

The Compton facility is the base of the company’s appliance recycling and energy efficiency contracts with major utilities such as Southern California Edison, for which the facility has recycled more than one million refrigerators over 21 years, as well as Los Angeles Department of Water and Power and San Diego Gas and Electric. When customers of these utilities call to take advantage of recycling or appliance exchange incentive programs offered by the utilities, it’s ARCA staff that actually travel to their homes to retrieve these old appliances and transport them to Compton.

Where refrigerators go to die.

The facility has a funky collection of antique refrigerators in pinks, blues, greens and other colors that look like they came straight out of a 1950s television sitcom. But what’s most interesting is watching these refrigerators taken apart piece by piece. Everything is stripped: their electrical cords, the plastic components that once held fruits and veggies, the icebox parts, everything. But this crowd is most intrigued by the removal of the ozone-threatening gases.

A Brief History of Ozone and Carbon

The Montreal Protocol is an international treaty designed to protect the ozone layer by phasing out the production of numerous substances responsible for ozone depletion. The protocol was agreed to on September 1987 and entered into force in January 1989. At that time, there was a hole in the ozone layer larger than the continental United States – and it was growing. The ozone layer in the Earth’s stratosphere absorbs solar radiation, protecting people from skin cancer and ecosystems from unknown degradation.

R-12, a colorless gas chlorofluorocarbon (CFC) targeted by the protocol, was used in most refrigeration and vehicle air conditioning appliances prior to 1994. Although the amounts of CFCs in the atmosphere are small, they make an outsized contribution to global warming because of their heat-trapping capabilities. While its manufacture was banned globally in 1996, there was still an inventory of appliances containing the material sold into the markets in the 1994-1995 timeframe, Woloz said.

“We’re seeing a sunset,” he said. “But we haven’t run out yet. There are a lot of old [appliances] that still work. They were built like battleships.”

As the supply of these old machines dwindles down, so does the source of ozone-depleting substances (ODS) materials. However, destruction of ODS is one of five carbon offset project types eligible for California’s cap-and-trade program.

The ODS protocol allows for the collection and destruction of eight refrigerants and foam-blowing agents, including dichlorodifluoromethane (R-12), originating in the United States that would have otherwise been released into the atmosphere.

The California Air Resources Board’s (ARB) issued nearly 9.3 million offsets to ODS projects as of June 24, a little more than a million fewer than the number of offsets issued to forestry projects – the largest recipient of offsets from the ARB.

Ecosystem Marketplace research shows that ODS projects comprised nearly 60% of the compliance offset transactions in North America that reported a project type in 2014, with an average price of $9.7/tCO2e.

ARCA’s Compton facility specifically is responsible for the creation of about 25,000 carbon offsets per year, said Derek Six, Chief Executive Officer of project developer Environmental Credit Corp (ECC), which works with materials sourced from ARCA to generate carbon offsets. R-12 from appliances stripped in Compton is shipped to Philadelphia, Pennsylvania where it is aggregated with R-12 from other ARCA recycling facilities across the United States, he said. The materials are then cleaned, tested, and weighed before being sent for destruction at an ARB-approved destruction facility in Bowling Green, Ohio, Six said.

Sourcing ODS for carbon offset projects for California’s program has benefitted ARCA’s bottom line. The company received $700,000 from the sale of carbon offsets in the fourth quarter of 2013 and netted $600,000 in the first quarter of 2014 before this revenue streamwas interrupted by the lengthy investigation into ODS offsets generated at the Clean Harbors Incineration Facility in El Dorado, Arkansas. The inquiry began in late May 2014 and did not reach a final conclusion until mid-November. The ARB ultimately invalidated 88,955 ODS offsets generated by a project from developer EOS Climate because the facility was out of compliance with its federal operating permit.

The ARB also originally proposed invalidating 142,199 offsets generated by ECC’s project activities at the El Dorado facility before ultimately concluding that the destruction activities related to these activities occurred outside of the timeframe when the Clean Harbors facility was purportedly out of compliance with its federal permit

“They changed the regulations on them and [Clean Harbors] didn’t quite catch up and they got hit with that,” Woloz said, adding that although his company’s offsets were initially caught up in the investigation, ARCA eventually did receive the offsets for materials destroyed at the facility.

Carbon offset revenue created by the destruction of ozone-depleting refrigerants acquired through recycling programs is one of the company’s five identified revenue streams. Mark Eisenschenk, ARCA’s President and Chief Executive Officer, observed that the carbon offset markets that had been frozen for a large part of 2014 due to the investigation freed up, opening the door for the company to receive an estimated $450,000 to $650,000 for carbon offsets by late April 2015, according to a March 2015 earnings report.

“We have been an active participant in California’s developing carbon offset market and anticipate increased involvement as the program expands,” the company said in its most recent annual report – a reference to the expansion of California’s program to include transportation fuels and other industries beyond the power sector earlier this year.

That carbon offset revenue generation begins in facilities such as the one in Compton – sometimes with an old pink fridge.

Gloria Gonzalez formerly worked as a News Editor and Program at Ecosystem Marketplace.