During UN climate talks on Wednesday, business leaders stressed the importance of aligning business and policy goals in order to deliver the best results for both sectors. The business community also reaffirmed their pledge to reduce emissions and meet the goals laid out in the Paris Agreement, and called on global political leaders to do the same. 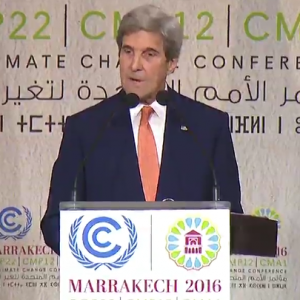 16 November 2016 | MARRAKESH | Morocco | Hours after world leaders recommitted themselves to the Paris Climate Agreement at the opening of the high-level segment of the United Nations Climate Conference here, Jonathan Pershing emerged from his temporary office at the US pavilion to a gaggle of businessmen and NGO representatives.

As lead US negotiator and then as US Special Envoy for Climate Change, he’d been a driving force in the creation of the agreement, and now he faced the prospect of seeing the president-elect pulling his country out of it.

But he wasn’t here to discuss the negotiating process. He was here to discuss Business Diplomacy – a new term for a sense that had been percolating here all week: namely, that to fix the climate mess, we must reform the private sector, and that requires private-sector leadership.

“We’ve made huge progress,” he said, “I believe we’ve gotten to a place that’s pretty good, and I think the evidence of that is in the kind of global investment that’s being made, and the kind of market structures that have been established, and the fact that the range of companies doing that is so wide.”

“It is not going to be governments alone, or even principally, that solve the climate challenge,” said US Secretary of State John Kerry earlier. “The private sector is the most important player.”

Kerry cited significant growth in renewable energy in the last roughly 10 years as proof of businesses’ big role to play.

“America’s wind energy has tripled since 2008 and solar generation has increased 30 times over,” he said. “The reason both of those will continue is that the marketplace will dictate that, not the government.”

“It’s no longer about a few leading green companies who have put themselves forward,” added Pershing. “It’s now mainstream; it’s now in board minutes; it’s now in annual reports; it’s now framed as a business imperative in a way that we didn’t have even five years ago.”

“Companies and investors around the world have longed recognized  the urgency of tackling climate change and the importance of policies to accelerate clean energy transition as well as the strong economic and business case for doing so,” said Sue Reid, the Vice President of Climate and Clean Energy at Ceres, one of the coordinators of the statement.

Companies that signed the letter range from Fortune 500 firms to medium-sized and family-owned businesses spanning 35 states. Some of the big names include Starbucks, Mars Incorporated, General Mills, NIKE and Levi Strauss & Co.

Eyes on the Private Sector

It’s impossible to tell at this point what the climate policy landscape will look like over the next four years but many businesses, as evidenced in the letter, have vowed to push forward down the path to sustainability with or without support from Washington.

Eliot Whittington is Deputy Director of the Prince of Wales Corporate Leaders Group (CLG), a European business consortium advocating for global climate solutions, and he noted that in many cases businesses and sub-national governments are ahead of national regimes.

For Mars, Rabinovitch said it made its climate commitment to reduce emissions 100% by 2040 under 2007 levels back in 2009, before the company was aware of any such global agreement. If Trump chooses to pull the US out of the pact, it wouldn’t change our targets, Rabinovitch said.

“We’re doing this because we see a real business risk. That’s not the result of any political leadership at any particular time,” he said.

“Companies don’t like things that are uncertain, unpredictable or unclear,” says Gilles Vermot Desroche Senior Vice President of Sustainability at Schneider Electric, another company that signed the statement, and acting on climate now presents an opportunity to minimize these uncertainties.

Because businesses don’t like uncertainty, they like countries to establish long-term climate strategies, which are targets to achieve by 2050. Long-term planning helps to identify synergies between varying public and private decision-makers, Teresa Ribera of the Institute for Sustainable Development and International Relations explained.

On November 16, the CLG released a policy briefing to assist countries with their long-term planning, ensuring they are business-friendly and align with the goals of the Paris Agreement.

“Sub-national governments and businesses are in many cases ahead of the game. One of the messages from the Paris Agreement is that governments and countries need to catch up and we’re encouraging them to do so in such a way that is constructive and joined up,” Whittington said.

Thomas Lingard, Climate Advocacy & Sustainability Strategy Director at Unilever, explained the need for the long-term planning component this way: “If you want to go on a journey, it helps to know where you’re going and how you’re going to get there. That’s true for any journey and it’s certainly true for the low-carbon transition.”

Lingard explained that capital tied up in infrastructure investments faces significant risk from policy change. “Development and the communication of countries’ long-term plans are incredibly important in reducing that risk. It gives a very clear signal to companies about the direction of investments,” he said.

“Flexibility in planning is necessary but it’s absolutely essential to start to figure out how nationals and sub-nationals are going to meet their targets. It’s one thing to sign an agreement that says we’re going to reduce 80 plus percent of our carbon emissions by 2050. It’s very much another thing to figure out exactly how to do that,” said Alex King, a Senior Policy Advisor to California’s Governor Jerry Brown.

French Climate Ambassador Laurence Tubiana agrees that long-term planning is critical to meet global climate goals, calling it one of the most important ratchet-up mechanisms of the Paris Agreement. And on November 17, Tubiana will launch the 2050 Pathway Platform at the climate talks.

“The idea of the platform is to connect governments with all the other decision-makers such as companies, cities and states and regions,” Tubiana said.

This newfound access to technology, knowledge and experience, Tubiana believes, will greatly increase the capacity of countries to improve and increase the ambition of their climate plans.

“Businesses are moving ahead with climate action and they expect countries to do the same,” said WWF’s Mariana Panuncio.

We will be featuring extended interviews with many of the people cited here in a new edition of the Bionic Planet podcast, entitled “Climate Change in the Trumpocalypse / Part 2”, to be posted later today or early tomorrow.
Bionic Planet is available on iTunes, TuneIn, Stitcher, and here: