Canada’s forests have long provided timber for all of North America, and they still do. But with the advent of climate change, they can also serve another function: carbon sequestration. Here’s how one small town and two indigenous peoples tapped carbon markets to manage their forest sustainably for generations to come. 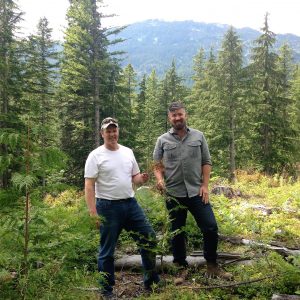 16 February 2017 | Tom Cole, the operations manager at Cheakamus Community Forest, has a mental list of what he calls “Tom’s magic spots” – hidden-away gems he’s gotten to know over 30 years of exploring these British Columbia woods. One is a little lake that acts as an “absolute mirror”; he swears that “you can’t tell if you’re looking at the lake or looking at reality.”

The lake, just a few hours north of Vancouver, Canada, is surrounded by 33,000 hectares of mountain hemlock, fir, yellow cedar, and white pine, which until recently were being chopped for timber, pulp, and paper at a rate of 200 hectares per year.

But that’s before the Cheakamus became a community forest, jointly managed by the First Nations of Squamish and Lil’wat, together with the Municipality of Whistler, in 2009. The three groups have agreed to manage the forest sustainably – with limited harvesting for timber, and a lot of conservation. To make ends meet, they turned to carbon finance – and may have created a template for conservation-minded communities across Canada as the country continues to put a price on carbon.

The Squamish and Lil’wat are two of nearly 200 First Nations in what is now British Columbia. Few B.C. First Nations signed treaties with the European settlers who began to arrive in the late eighteenth century, and when the tracks for the Pacific Great Eastern Railroad were laid in 1914, the Squamish and the Lil’wat received little economic benefit from the resulting logging boom. Almost a century later, Olympians traveled to Cheakamus for the 2010 Winter Games, and trees were cut for a different reason: to make room for ski slopes and visitor infrastructure. The tourism influx from the Olympics has continued, with 2.5 million people visiting the forest to hike, ski, and snowboard each year.

Regaining Rights to the Forest

Over the past decade, the ownership regime at Cheakamus has also changed significantly as the B.C. government – which controls the vast majority of forestland in the province despite the lack of formal treaties – has begun a process of reconciliation with First Nations. In 2005, the government asked the Resort Municipality of Whistler (located in the heart of Cheakamus), the Squamish, and the Lil’wat to submit a proposal to create a Community Forest, which would mean they had the right to manage and harvest the forest. The agreement became official in 2009, giving the First Nations and the local community economic control over the land for the first time in centuries.

“Historically the Lil’wat has not benefitted from harvesting in the territory,” said Kerry Mehaffey, Director of Business and Economic Development for the tribe. With the new land rights, “it’s switched almost 180 degrees.”

Rather than being controlled by private companies, harvesting rights were now in the hands of the three communities, creating opportunities for local forestry jobs. But not everyone was on the same page about how much, or even whether, to harvest. A baseline Community Forest License allowed for about 80 hectares of harvest annually – less than the approximately 200 hectares per year harvested by private companies in recent decades, but still significant.

“Some parties wanted to continue to have a working forest, while others basically wanted to put a fence around it,” explained Joseph Pallant, who runs the offset project developer Brinkman Climate. “The compromise was ecosystem-based management.”

Ecosystem-based management meant careful planning to conserve rivers, flora, fauna, and important cultural and recreational sites. It didn’t imply a halt to harvesting, but rather reducing harvest from about 40,000 to 20,000 cubic meters per year, or about 40 hectares of harvest annually.

The decision to harvest less than the law allowed did mean forgoing some potential job creation. Jeff Fisher, who sits on the Cheakamus Community Forest Board of Directors and is also a manager for Sqomish Forestry LP, a company that employs about a dozen Squamish tribal members, estimates that 20,000 extra cubic meters of harvest could have meant about 15 additional jobs. But Mehaffey recalls that there was little pushback to the ecosystem-based management plan: No one was losing their job, after all, it was just that fewer harvesting jobs would be created.

Plus, the community forest designation for Cheakamus coincided with other changes underway in B.C. – changes that would open up a different revenue stream. In 2008, the provincial government decided to become carbon neutral and require all public sector organizations to offset any emissions they weren’t able to reduce. The policy created a unique opportunity for Cheakamus. As Cole put it, “the benefits that derive from the forest don’t have to come from the logs themselves.” Instead, they come from live trees in the form of stored carbon.

But this wasn’t straightforward, at least not at first. Ecotrust Canada, which had long been working with the community forest, teamed up with Brinkman Climate to turn Cheakamus’s carbon asset into offsets – the emissions reductions the Community Forest could sell to the government in a market that averages CA$12 per tonne. However, though the Community Forest Agreement granted the Squamish, Lil’wat, and the town of Whistler timber harvest rights along with other non-timber forest products, the government required a wholly new agreement to transfer rights to manage and monetize the atmosphere itself.

This concept had a bit of precedent in B.C. In 2011, the provincial government began signing Atmospheric Benefits Sharing Agreements (ABSAs) with First Nations to enable them to develop and sell carbon offsets generated by protecting the Great Bear Rainforest. After long and sometimes convoluted negotiations, on May 7, 2015, Cheakamus became the first Canadian Forest Tenure to achieve this type of agreement.

“It seemed to take forever when we were doing it, it was close to three years, but it was worthwhile,” said Heather Beresford, the manager of environmental stewardship for Whistler.

Satnam Manhas, the program manager for forestry and ecosystem services at Ecotrust Canada, said the carbon agreement came just in time. “For communities to believe that these things [offsets] were real and not games, we needed to start showing local results,” he said. Ecotrust considered pursuing other revenue streams for the forest – an ecosystem services fee for recreation was one idea – but ultimately decided to pursue carbon offsets “because we felt that would have the biggest impact for Canada.”

That hunch seems to have been correct. In October 2016, Prime Minister Justin Trudeau announced that every Canadian province and territory must price carbon emissions by 2018, either through a carbon tax reaching a 2022 price of $50/tonne or by a cap-and-trade system that requires annual emissions reductions in line with Canada’s Paris Accord commitment of reducing emissions 30% below 2005 levels by 2030. Along with B.C.’s Forest Carbon Protocol, Quebec and Ontario’s cap-and-trade programs feature forest carbon offsets.

“We expect provinces with cap and trade systems to show real, annually verified emissions reductions, ensuring they do their part to achieve Canada’s Paris target,” said Pallant. “Carbon offset projects are an integral part of these systems, driving investment into emissions reductions beyond the energy sector.”

In 2015, the Cheakamus Community Forest project did verify and issue its first tranche of carbon offsets: 44,000 tonnes. To date, they’ve sold all but 2,000 of them, with 80% of the tonnes going to the B.C. government and the rest being scooped up by voluntary buyers including Vancity Credit Union,Tinhorn Creek Winery, Local Practice Architecture, and MET Fine Printers. Project developers Ecotrust Canada and Brinkman Climate, along with the Resort Municipality of Whistler government, also neutralize their emissions by buying offsets from the project.

Now that the money from the carbon offsets is beginning to flow, the Cheakamus partners have had to prioritize how it is spent. Much of the first tranche went to paying the required project developer and auditor fees, to make sure the carbon accounting was sound. Now the three parties are laying the groundwork for the future. A major planning exercise completed in 2015 identified old growth management areas, potential fuel management areas (about 2,500 hectares were identified as at risk of forest fires), and special management zones for First Nations to go along with the project’s doubled riparian buffers and smaller cut blocks.

“That’s the way we live up to the word ‘community’ in community forest,” said Beresford. “The carbon revenue really helps. We wouldn’t be able to do [the plan] without it.”

Some money will also likely be set aside for trail maintenance, parking lots at trailheads, bridges, and other facilities that improve recreational access.

Offsets, by definition the absence of a carbon dioxide emission, are difficult to spot with the naked eye. Improved Forest Management carbon projects like Cheakamus are especially tricky in that they can still involve harvesting; the key is that the tree-cutting is measurably less than would otherwise occur, and done in a way that ensures carbon storage long-term. Understanding projects like these requires an understanding of the history of a forest – and considering what its future might hold under different scenarios. Tramping around Cheakamus on a sunny day in July, Joseph Pallant and Tom Cole provide that perspective.

Rather than his ‘magic spots,’ Cole points out recent harvests in line with the ecosystem-based management plan. The harvest areas are pockets of light within the forest – small enough that it would take only a few minutes to walk their perimeter. The management plan requires select trees be left standing within the harvested plots, leaving a landscape that feels more like a park than a clear-cut. In the plots cut several years ago, the understory is already coming back up, with new trees fighting for their patch of sun. 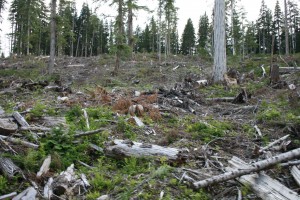 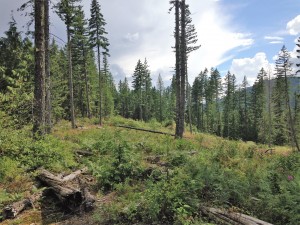 From left to right: A recently and less recently logged area. Neither is a clear-cut, with some trees remaining on the landscape. (Left photo by Joseph Pallant.)

Which patches get cut each year depend partly on a process of elimination. The government requires that 19% of old growth forests in B.C. is protected; Cheakamus upped this amount to 30%. The vegetation along streams is kept intact, as are corridors deemed important for wildlife, such as the grizzlies that sometimes roam here. Other than that, the communities prioritize the viewsheds – how the slopes of the forest look from popular vantage points. Cole understands the value of managing Cheakamus for its aesthetic and ecosystem services values is very much tied to whether people come to ski the trails, fish for salmon in the streams, or visit Olympic Village.

“You can’t muck around with recreation,” says Cole. “Access is where we can bridge the divide between anyone who’s out here.”

Allie Goldstein is an Assistant Scientist at Conservation International, where she works on nature-based climate adaptation. She previously worked on forest carbon finance at Forest Trends.