Some environmentalists believe little was accomplished in generating sustainable forestry at Rio+20 and their feelings are being reinforced by the outcomes document which shows little promise of implementing sustainable forest practices or properly valuing forest ecosystems and instead simply reinforces old ideas that have never been put into action. 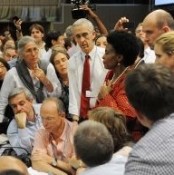 Some environmentalists believe little was accomplished in generating sustainable forestry at Rio+20 and their feelings are being reinforced by the outcomes document which shows little promise of implementing sustainable forest practices or properly valuing forest ecosystems and instead simply reinforces old ideas that have never been put into action.

This article originally appeared in the REDD-Net blog. Click here it view the original.

18 July 2012 | The Rio+20 UN Conference on Sustainable Development pledged a renewed focus on sustainability challenges. By using a holistic framework that addresses economic, social and environment aspects of sustainability, it hoped to rekindle the essence of sustainable development that was a key part of the success of the 1992 Earth Summit.

But you wouldn’t know that from The Future We Want, the final outcomes document from the global summit. You only need to look at the coverage of forests to see that Rio+20 fell short of finding a way to talk about the complexities of ecosystems and shift how the natural world is valued.

Forests are emblematic of natural capital. Over 1 billion of the world’s poorest people’s livelihoods depend on forests and they support rich biodiversity. Without a strong focus on forest ecosystems, we will not be able to find solutions to climate change, food security or better equity in the north-south divide. But the Rio+20 text does not do justice to their critical role.

Forests were given four paragraphs in The Future We Want. The first paragraph includes a list of themes that would make forest advocates proud, from stopping forest loss and degradation to supporting the local communities. But it’s largely reaffirming previous statements and agreement. The only call for action is an ‘urgent implementation of the Nonlegally Binding Instrument on all Types of Forests’, a document that was adopted in 2007 by the UN General Assembly and has yet to be implemented. The text says the right things, things that are difficult to disagree with, but fails to take the step to turn that into practical action.

The seeds of change entered at the proposal stage and never emerged in text form. Two timeframes were removed from the text during negotiations, as is clear from the draft dated 2 June 2012. One was a commitment ‘by 2020, to strengthen forest governance frameworks and achieve sustainable forest management’; the other was to halt ‘global forest cover loss by 2030 at the latest.’ But, as is the case with many multilateral processes, the host country was keen to reach some agreement between the hundreds of interests present, and Brazil opted to remove all proposals from the text that had not yet been universally agreed or resolved. Consequently, progress was extremely limited and forest governance wasn’t adequately addressed.

While the text refers to the importance of ‘cross-sectoral and cross-institutional policies’, governments failed to make these links in the outcome document as forests barely receive a mention in other parts of the outcome document. For example, while 40 percent of the global population depend on biomass for their energy needs, a figure that is expected to increase with the world’s population, there is no mention of forests in the section on energy.

Missed Opportunity: No Language to Bridge Economics and the Environment

Also absent from the text are new ways to understand the value of the environment. There were high hopes for a better metric of economic progress that takes into account environmental degradation and changing corporate reporting to include natural capital. Secretary-General Ban Ki-moon acknowledged the urgency of a mentality shift when he said, ‘It’s time to recognise that human capital and natural capital are every bit as important as financial capital.’

The outcomes document doesn’t completely ignore the role economics could play in action for the forests, stressing ‘the importance of integrating sustainable forest management objectives and practices into the mainstream of economic policy and decision-making’. But as with other sections, the enforcement mechanism relies on old ideas– not forward-thinking that could render a paradigm shift.

In an effort to connect the multilateral process with civil society, Rio+20 employed a technique never before utilised. It opened proposals up to a public vote. In the days leading up to the summit, organisers held a series of dialogues, each focusing on a different topic, in which a panel discussed proposals. On the dialogue about the economic bases of sustainable development, over half the votes cast were for two proposals: one to include environmental damage in the calculation of GDP, the other to remove the economic invisibility of nature. It represented a demand from the people for the economic sector to better understand its effects on the world’s ecosystems. But the dialogues were held the week of the summit, and there was no chance leaders would incorporate suggestions into the carefully crafted final outcome document.

Some environmentalists recoil at the idea of calling forests ‘capital’. They worry that language commodifying forests will result in corporations treating ecosystems like warehouses, reducing them to a line on finance sheets. But in many ways forests are already commodified, with the price of timber they hold or the land they’re on. Although economic terms perhaps should not be the only measure of the value of forests, there will be no solutions unless we find common terms to talk to business. The multilateral process let us down by not creating that mechanism.

We hoped Rio+20 would break through the progress made in the 1992 Earth Summit; instead, it doesn’t appear to have got us far. After decades of negotiations and effort, practical action against deforestation is still stalled by competing interests. In the following decades, it is predicted that the global population will balloon to 9 billion people and global consumption will quadruple. The only way we could accommodate the increase is if we learn how to develop without mining resources from the forest in unsustainable ways. And the first step is to find language to cut across the cross-sectoral. If we don’t change course, we are doomed to end up where we are headed.
Sarah Golden is a resarch assistant at ODI.