As the world celebrates the UN’s International Day of Forests, let’s pause for a moment to look just at national forests – namely, those of this nation we call the United States. 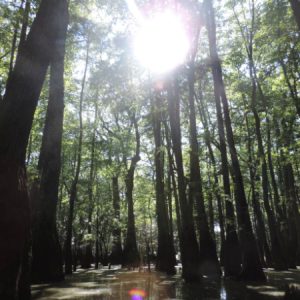 21 March 2017 | As the world celebrates the UN’s International Day of Forests, let’s pause for a moment to look just at national forests – namely, those of this nation we call the United States.

Our forests, farms and fields absorb about 850 million metric tons of carbon dioxide every year, which means they remove about 16 percent of the greenhouse gasses that the energy and industrial sectors are generating.

That makes them valuable, but climate change makes them vulnerable, and no one really knows what will happen next.

If the forests are well-maintained, of course, they can absorb more carbon dioxide while also regulating water flows and providing habitat for valuable species. If they’re poorly-maintained, we’ll lose that giant carbon sink and face the same problem China did when it chopped its forests in the 1990s: namely, more floods, more droughts, and dirtier rivers.

That’s one reason President Obama published his Mid-Century Strategy for Deep Carbonization just before leaving office. It argues that, with the right incentives, land systems can offset up to half the country’s emissions by 2050.

While Obama focused on sustainable use, a report released today argues we can go even further. Called “The Great American Stand: US Forests and the Climate Emergency”, the report is published by the Dogwood Alliance and focuses on the current science around forests and contrasts US treatment of forests with treatment in other countries.

“If we halted deforestation, protected existing forests, and expanded and restored degraded forests, we could reduce annual emissions by 75 percent in the next half a century,” the authors argue. “If fossil fuels were rapidly phased out during this same time period, we could reduce the amount of carbon in the atmosphere, meet the goals of the Paris Agreement and avoid catastrophic climate change.”

Obama’s mid-century strategy builds on a paper called “Building Carbon in America’s Farms, Forests, and Grasslands: Foundations for a Policy Roadmap”, which argues in part for the need to measure the amount of carbon being removed from forests and stored in furniture and buildings. That report even argues that the government can promote the use of more wood in large structures like shopping centers and hospitals so that carbon can be removed from forests and stored permanently – and this is where the two papers both diverge and converge.

They diverge in their views on the storage capacity of harvested wood products and the degrading impacts of logging, with the Dogwood paper arguing that carbon stores are currently over-estimated – in part because, once you chop a tree for its wood, you stop it from growing (and absorbing more carbon).

So, where is the convergence?

Answer: in the unnecessary uncertainty that now hangs over the countryside.

Both argue that the United States needs to conduct a thorough accounting of the carbon flows into and out of its forests, farms, and fields – just as other countries have done.

On that, I think, we can all agree.