Indigenous people of the Amazon are beginning to unite around efforts to save their forests, but they still face threats from outside their territories, according to Tuntiak Katan, who emerged as a leading indigenous voice at climate talks in Bonn. There, he urged the global community to keep giving indigenous people a global voice 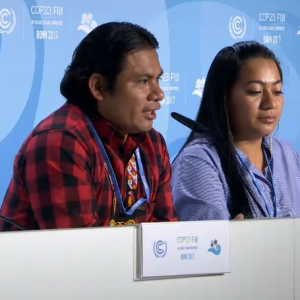 16 November 2017 | BONN | While climate negotiators from around the world are meeting here, in the former German capital, for year-end climate talks, indigenous leaders across the Amazon are also beginning to cooperate on climate change, according to Tuntiak Katan, who is the coordinator for Territory and Natural Resources at the National Indigenous Confederation of the Ecuadorian Amazonia (CONFENIAE).

The Confederation is comprised of 11 indigenous peoples, many of whom were historic enemies, but now oversee 10 million hectares of Amazon forest. In recent years, he says, they have begun cooperating more among themselves, and with regional authorities – but they also face continued threats.

“The destructive and extractive policies with no comprehensive and long term vision, have caused problems in Ecuador where communities´ members have been politically persecuted, imprisoned or even murdered,” he says, adding that laws are often used to prosecute leaders.

He cited Agustín Wachapa, an indigenous leader who was imprisoned for obstructing mining interests – one of the more than 100 indigenous leaders in Ecuador facing prosecution because of their position against the government, says Katan, adding that 40 have been convicted of crimes for activities that he says would be considered legitimate protests in most countries.

He focused on the plight of the Shuar people of the Condor Mountain Range, many of whom have been murdered, presumably for defending their territory, and said such attacks have forged tight alliances among peoples.

“As indigenous people, we have demonstrated that we are defending our territories from internal and external pressure,” he says.

In recent years, he adds, they have become more vigorous in engaging the Ecuadorian political system.

He credited Ecuadorian President Lenín Moreno, who took office in May, for engaging them, but urged the international community to shine a light on their situation.

“We have opted for an honest and direct dialog between equals,” he said. “In the past months, we have sat with the current national government to point out the unfeasibility of current extractive policies. This is not the way; the multinational development is different.”

He also said that, since President Moreno engaged indigenous people in the national climate change discussion, COFENAI and its regional subsidiaries, ECUARUNARIE and CONAISE, have become more tightly coordinated.

In a wide-ranging press conference, available online here, he expressed hope that the Shuar people could dock their holistic economy with the that of the larger world, and called on climate negotiators to support efforts that reward sustainable agriculture.

He also urged all the developed countries whose companies have current business in the Ecuadorian Amazon, especially in the fields of mining and oil, to support climate change mitigation policies, to commit as soon as possible to take urgent measures and support those countries who are already on board – and to visit the country and make sure their companies are not harming the territory or the communities.

“The indigenous nationalities we need and demand scientific, economic and technical resources to manage and secure our territories for the future” said Katan. “No more criminalization, imprisonment or murders of the indigenous forest guardians, better guardians than any policy. Let´s start with a healthy alternative economy that promotes and guarantees the survival of the indigenous people.”