Deforestation has recently been the talk of the United Nations climate change negotiations because of its potential to release huge amounts of greenhouse gas emissions. But a recent study shows that even without this effect, clearing tropical forests will have important implications for temperature and rainfall and how deforestation occurs (or doesn’t) matters a lot for the future of agriculture on this planet. 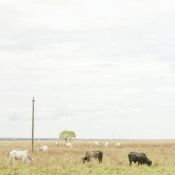 18 December 2014 | While land-use negotiators at the United Nations climate talks tend to focus on the carbon released into the atmosphere when forests are felled. Deforestation does, after all, account for as much as a fifth of global emissions the climatic effects of land-use change go well beyond escaped carbon dioxide molecules. A new study released today in Nature Climate Change culls together the results of dozens of global and regional climate models to demonstrate the effects of deforestation on temperature and rainfall patterns, with implications for farmers around the world.

General circulation models (GCMs) that simulate the Earth’s climate system, including the atmosphere, oceans, and land surface, allow scientists to hypothetically wipe out all tropical forests to see what would happen. These simulations show that a world without forests would be a hotter and drier one.

At the upper end of the models’ projections, a world with forest-bare tropics would be 0.7 degrees Celsius hot. about equal to the global warming since the Industrial Revolution. And this is without including any effects from the three gigatonnes of carbon that deforestation spurts into the atmosphere each year as felled forests decompose.

Tropical forests also move and regulate huge amounts of water, creating crucial micro-climates for plants and animals. Overall, deforestation leads to reductions in rainfall between 10% and 15% in the surrounding area.

“Tropical forests are often talked about as the ‘lungs of the earth,’ but they’re more like the sweat glands,” said Deborah Lawrence, the study’s lead author and a Professor of Environmental Sciences at the University of Virginia. “They give off a lot of moisture, which helps keep the planet cool. That crucial function is lost and even reversed when forests are destroyed.”

Observational data the on-the-ground stuff indicates that deforestation has already had staggering effects on local climates. For instance, across deforested sites in Sao Paulo, Brazil, rain events were higher intensity but less frequent compared to areas that kept their forest cover. In Rond´nia, Brazil the wet season has started on average 11 days later in deforested regions but remained unchanged in forested ones.

Complete deforestation of the tropics is a fairly unlikely scenario, as Lawrence and her co-author Karen Vandecar note. So what will happen to Earth’s climate if deforestation continues in its current “business-as-usual” trajectory, with smallholder farmers slashing and burning, palm oil companies clearing their concessions, cattle ranchers grazing their herds, and mining companies splintering new roads into the canopy?

The models suggest that there may be a critical threshold beyond which reduced rainfall due to deforestation “triggers a significant decline in ecosystem structure and function.” For the Amazon, this threshold is likely between 30% and 50%. The tipping point may be different for Africa’s comparatively drier tropical forests where forest fires are more common, releasing aerosols that affect rainfall. Southeast Asia’s tropical forests are naturally more humid and surrounded by oceans, also potentially affecting the climatic point-of-no-return.

“Although the current level and pattern of deforestation may not have pushed tropical climates over a tipping point yet, modelling results at regional to global scales are consistent in their predictions that such a tipping point exists,” Lawrence and Vandecar write.

Not all Deforestation is Created Equal

The models demonstrate that the rateof deforestation doesn’t matter much in terms of the climatic impacts, and that deforestation almost universally leads to temperature increases. However, the pattern matters a lot in terms of effects on rainfall.

“While somewhat surprising, these results are consistent with research that demonstrates the importance of large patches of forest in promoting or sustaining rainfall downwind,” the authors write.

The Edgier the Better?

However, when the authors looked at regional models at a much smaller scale than the GCMs, they found that clearing very small patches of forest can actually lead to increased rainfall as the hot air over the deforested area rises and mixes with the moist air along the forest edge, leading to cloud formation. The smaller the patches, the more edges and the more rainfall.

So, in addition to a tipping point for the percentage of tropical rainforest that may be lost, there may also be a sweet spot in terms of patch size. These findings may explain apparent contradictions between models that predict drier conditions with large-scale deforestation and real-life observations that find no change or even more rain in some deforested areas.

So, what happens if we tumble over the edge of these invisible deforestation tipping points?

The authors suggest that on the other side of the cliff may be a world of strained food production. Without the forests that drive water and wind systems, the breadbaskets of the world even those on entirely different continents from tropical forests could see altered climate conditions.

Models suggest that deforestation in the Amazon could reduce rainfall in the U.S. Midwest, which grows much of the world’s corn. Deforesting the Congo could cause up to a 50% reduction in rainfall and a three-degrees-Celsius temperature rise, affecting cassava, plantain, coffee and cocoa production. And clearing 40% of the Amazon rainforest could reduce rainfall 4% in the Rio de la Plata Basin, a center of soy and wheat production thousands of kilometers away.

On-the-ground observations in the Amazon and elsewhere also show that deforestation can also exacerbate climatic extremes, such as more pronounced dry periods followed by monsoons or much hotter days and cooler nights.

“Farmers, so reliant on consistent and reliable growing conditions, could lose their bearings and even their incomes, when facing these ups and downs in temperature and rainfall,” Lawrence said. “While farmers may ultimately adapt to shifts in the season, it’s difficult if not impossible for farmers to adapt to increased floods or parched soils.”

Deforestation could affect what types of crops can be grown and where, as well as what types of techniques might be needed to adapt to projected changes.

“What happens on the surface of the Earth (in terms of changes in vegetation) is a big factor in climate change,” Lawrence said. “We ignore it at our own peril.”