The coffee is flowing as negotiators load up for another night of talks, but the growing support for loss and damage finance could help break an impasse over provisions for a transaction fee on international carbon transactions. 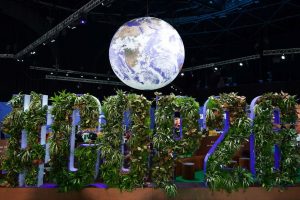 GLASGOW | 12 November 2021 | Negotiators and observes are increasingly optimistic about the prospect of achieving a viable set of rules for implementing Article 6 of the Paris Agreement before year-end climate talks (COP26) end here over the weekend, although some details may be put to a working group for consideration over the course of the year.

“In this morning’s text, the principle decisions are all there, and I assume Article 6 will go to plenary once the finance decisions are reached,” said former Dutch negotiator Jos Cozijnsen, who now serves as a legal advisor to the Carbon Neutral Group.

Norwegian Prime Minister Jonas Gahr Støre seemed to make a similar statement when he told the Norwegian Broadcasting Corporation that “If we get the financing done, Article 6 will be done as well.”

Ecosystem Marketplace was unable to speak directly with Støre.

Cozijnsen acknowledged that some sticky issues remain – primarily whether to charge a transaction fee on internationally-transferred mitigation outcomes (ITMOs) under Article 6.2 of the Paris Agreement to fund adaptation, and the fate of old Clean Development Mechanism (CDM) credits.

“I can see an agreement in principle on both issues, with details put off to a working group,” he said.

A transaction fee already exists under Article 6.4, which covers the central hub for transferring credits, but Article 6.2 is more challenging because of the diversity of arrangements. The US state of California and the Canadian province of Quebec, for example, already engage in cross-border trading, while several “carbon clubs” are in various stages of development around the world.

“It would be hard to implement, but not impossible, and there comes a time where you just have to say, ‘Let’s make a deal,’” Cozijnsen said.

It is not uncommon for rulebooks to be approved with some provisions assigned to working groups for the following year, and Cozijnsen added that a triage mechanism could be created for old CDM credits, with only some of them going into the 6.4 hub.

Adaptation funding increased dramatically in Glasgow, with $351 million being pledged for the adaptation fund and the broader negotiating text calling for the creation of a dedicated agency to manage climate-linked loss and damage within two years.

This would be separate from the $100 billion per year for both adaptation and mitigation that rich countries have pledged to developing countries – a pledge that looks likely to finally be achieved in 2022.