With evening plenaries underway in Paris, the patchwork approach to negotiating is working as it was designed to: a text is emerging that gives everyone enough of what they want to hopefully prevent a few from preventing success for all. Scores of countries have called for stronger language on REDD+ and more ambitious target of 1.5 degrees Celsius. 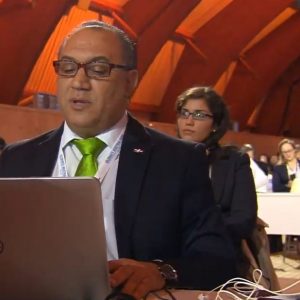 9 December 2015 | PARIS | The Paris Patchwork Climate Accord is taking shape in evening plenaries here as negotiators continue to work on a streamlined negotiating text that emerged shortly after US Secretary of State John Kerry announced that that the United States  would double adaptation finance, from $400 million to $800 million, by 2020. The current text explicitly recognizes the need to save forests and Reduce Emissions from Deforestation and Degradation (REDD), a once contentious set of processes that have now gained almost universal acceptance.

“The REDD+ section (Article 3bis) contains completely new text, and we are beginning to see the clear emergence of a REDD+ package,” wrote Gustavo Silva-Chávez, Program Manager of the REDDX climate-finance tracking iniative, on the Forest Trends blog (Forest Trends is Ecosystem Marketplace’s publisher). “The first sentence clearly calls for all countries to ‘conserve and enhance…sinks and reservoirs of GHG’ – this is UN speak for forests – and makes a clear reference to the 1992 UN Framework Convention on Climate Change. Making such an unequivocal reference to the Convention clearly signals its importance in the overall text.

“Although the acronym REDD+ does not appear, the official title (Reducing Emissions from Deforestation and forest Degradation) is clearly in here. At the end of the paragraph there are clear reference to previous COP REDD+ decisions, including the Warsaw Framework. It looks short and simple on paper, but this paragraph is the ‘on’ switch for REDD+.”

He cautions, however, that two days of negotiations remain, and it isn’t over until it’s over.

For more on the emergence of forests as a cornerstone of this year’s accord read:

“All the elements for a strong and equitable agreement are still in the latest, shorter draft,” says Jennifer Morgan, Global Director of the Climate Program at the World Resources Institute (WRI). “There is clearly an immense amount of work to be done here in Paris, but things are starting to come together..”

Hooray for Forests, but What About the Rest of Nature?

“In the big scheme of things, an article that everyone understands as the REDD article is as good as it gets,” said Alistair Graham of Humane Society International, an Australian-based environmental NGO. Graham is part of the REDD+ Safeguards Working Group (RSWG), a consortium of indigenous organizations and civil society that focuses on the co-benefits of REDD+.

The RSWG is, however, asking for more in the larger picture, in the context of the non-carbon co-benefits that have to do with biodiversity and human rights. The group is concerned about ecosystem integrity, which is a holistic approach that looks far past the carbon or forest even, at the overall wellbeing of an ecosystem.

“The text does have reference to greater ecosystems, it’s just that those references aren’t strong enough,” said Jakob Kronik, the Director of International Cooperation at Forests of the World. “We’re trying to widen this and not just talk about REDD or forests and it’s important that these issues are talked about in the coming 48 hours.”

As it stands, a mention of ecosystem integrity is reduced to a note in the preambular portion of the draft agreement. And since the preamble portion is aspirational, it doesn’t indicate action. This is far removed from the 1992 Convention as it mentions ecosystems seven times.

“This agreement represents a major backslide on the convention itself. Now we’re fighting to get reference to ensuring the integrity of ecosystems in all climate actions,”  Rosalind Reeve, a Senior Fellow at the Ateneo School of Government in Manilla, said.

So the RSWG is pushing for explicit mention of ecosystem integrity within several parts of the text, including its purpose and mitigation sections.

Having said that, Kronik and Graham are pleased with REDD’s inclusion thus far. They both note REDD+ will develop and countries will implement it in the varying ways they regard it: as a process, package, framework, mechanism or other.

“If it’s in an article, then it’s in the agreement. And we know what it’s about and we’ll find the best way to work it out,” Kronik said.

In terms of what’s different from the previous text, Morgan highlighted adaptation where a more robust article is directly linked to global stock take. It also includes language regarding adaptation plans and communication, where nations will update and review ongoing strategies.

Capacity building was ramped up as well in the new version, which is a step forward, Morgan said. And there’s also text mentioning revisiting country climate action plans, or Intended Nationally Contributed Contributions (INDCs) in five or six years, depending on the country, to update objectives.

However, there wasn’t any progress on usual sticking points such as loss and damage and transparency. The challenge surrounding transparency, Morgan explained, is primarily over if countries should have one or two systems.

Negotiators have since reconvened with a new draft text expected tomorrow morning.