Ecosystem Marketplace publisher Forest Trends today kicked off a six-week fundraising effort as part of a crowdsourcing effort being spearheaded by the Skoll Foundation. To support this effort, we will be publishing short pieces each week highlighting a different aspect of Forest Trends’s work on climate change, watershed management, and biodiversity protection. Here’s our first installment. 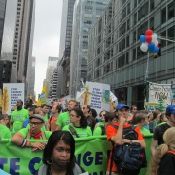 27 October 2014 | Last month, an astounding step was taken in the fight against climate change. More than 400,000 people marched across 40 blocks of New York City as part of the People’s Climate March, four times the number expected by organizers.

The march was stunning in its diversity and strength of message, and media seized on the phenomenon, heralding the growing drumbeat for action on climate change. Beyond everyone’s expectations, the Climate March gave a much-needed boost to action on the issue — and a glimmer of hope.

For us at Forest Trends, the march was a poignant and powerful symbol of nearly two decades of work on the issues around climate change — testing and piloting methods that we now know work and work well. The Forest Trends team was at the march bright and early that Sunday, because throwing ourselves into these issues is not just what we do; it’s who we are. It was exhilarating to have the drumbeat we have been pounding for years now echoed back to us in the faces and chanting of the people around us.

Strange Bedfellows and a Proven Strategy

The march took place two days before the United Nations’ Climate Summit, during which an unlikely alliance of corporations and governments teamed up with conservationists and indigenous people. Together, these disparate groups vowed to end deforestation by the year 2030, and they offered a clear strategy that helps indigenous people keep forests alive so that forests can keep us alive.

It’s a strategy that Forest Trends helped enable by uniting foresters, government representatives, financiers, and indigenous leaders — including the first indigenous group that has ever received carbon payments — around the common understanding that people need forests more than forests need people. It works by bringing the priceless services that forests provide — such as clean air, clean water, and climate regularity — into our modern economy, which until now has put a higher price on dead wood than on living forests.

Forest Trends then leveraged its lessons from the Surui Forest Carbon Project to help the Brazilian state of Acre establish a state-wide system of environmental finance that will funnel $2.9 million to indigenous land-use projects this year alone. That effort set the stage this summer for governors from forested states around the world to sign the Rio Branco Declaration, under which they promised to end deforestation at home — but only if the rest of the world steps up to do its part.

The Forest Trends mission doesn’t end with forests, but rather aims to maintain, restore, and enhance all connected natural ecosystems, which provide life-sustaining processes, by promoting incentives stemming from a broad range of ecosystem services and products. Specifically, Forest Trends seeks to catalyze the development of integrated carbon, water, and biodiversity incentives that deliver real conservation outcomes and benefits to local communities and other stewards of our natural resources.

As we head toward the next round of climate talks, to be held in Peru in December and in Paris in 2015, the world again will have a chance to step up on climate change. Forest Trends will be working across the globe to reinforce these efforts to catalyze connections between producers, communities, and investors, and to develop new financial tools to help markets work for conservation and people by making the priceless valuable.

The message from the People’s Climate March was clear: We need action on climate change.

And at Forest Trends, we know some ways to make that happen now.

Today, you have the chance to become part of this work. Until Dec. 5 every gift to Forest Trends will be matched by the Skoll Foundation. Your gift helps protect forests and other threatened ecosystems and contributes to local livelihoods and conservation.