Healthy topsoil teems with life, and on this planet, that means carbon. But as we churn through topsoil, we release carbon into the air, where it becomes carbon dioxide, the most common greenhouse gas. and lots of it: nearly 300 billion tons of carbon dioxide over the last 200 years, according to the Intergovernmental Panel on Climate Change. Here’s how carbon finance is helping to reverse that trend. 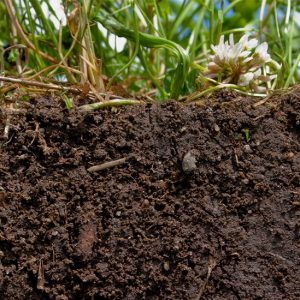 27 February 2018 | Late last year, on the eve of global climate talks in Bonn, Germany, the National Academies of the Sciences published a paper called “Natural Climate Solutions,” which showed how we could simultaneously feed more people while slashing greenhouse gas emissions just by improving the way we manage our forests, farms, and fields.

Specifically, the paper identified 20 nature-based “pathways” that, combined, could get us 37 percent of the way to meeting the Paris Agreement target of keeping global temperatures from rising more than 2 degrees Celsius. The pathways ranged from saving forests to managing fertilizer more effectively to improving the way we graze cattle, and the total emission reductions the paper identified were 30 percent higher than those identified in previous studies.

“It was initially a bit of a head-scratcher,” says lead author Bronson Griscom in an upcoming episode of the Bionic Planet podcast. “But then we realized there were a number of pathways that were not fully included in any other prior assessment.”

Many of those “new” pathways focused on something we all take for granted: the soil beneath our feet.

Soil: The Stuff of Life

Most people know that trees and plants remove carbon dioxide from the air and store it as carbon. But they may not know how much of that carbon ends up in the soil.

When plants take carbon dioxide out of the atmosphere through photosynthesis, they store some of it in their leaves, trunks, and roots, while some of that carbon, along with nitrogen – another potent greenhouse gas – gets “fixed” in the soil below, where it acts as fertilizer. When leaves fall and plants die, the rest of that carbon is absorbed into the soil as well. As a result, soils store more carbon than the earth’s atmosphere and all its plants and animals combined.

But we are rapidly losing and degrading soil. In fact, scientists estimate that in the last 150 years alone over half of the earth’s topsoil has eroded away, wreaking havoc on farmers, waterways, and the climate. Of the soil that is left, about 40% is considered either partially or seriously degraded.

These degraded soils represent both a threat and an opportunity: if they continue to erode, our agriculture systems will suffer tremendously, but if we can revive them, we’ll promote food security and slow climate change at the same time.

Hear our Interview with Bronson Griscom

You can hear an in-depth interview with Bronson Griscom on Episode 31 of the Bionic Planet podcast, which is available via iTunes, TuneIn, Stitcher, and pretty much anywhere you access podcasts, as well as on this device here:

Deforestation and conventional agricultural practices, like monocropping (growing just one crop on the same land, year after year), overgrazing, and frequent tilling (overturning, digging, or otherwise breaking up the soil, usually by machines) leave topsoil exposed and vulnerable to being swept away by wind and rain. Conventional farming practices also leave the remaining soil less healthy and more likely to emit greenhouse gases. Breaking up the soil increases the biological process where organisms break down (known as decomposition), which emits more carbon dioxide into the atmosphere, throwing yet another wrench in our climate system.

This combination of erosion and less healthy soils depletes a valuable resource for farmers, and results in massive amounts of carbon and nitrogen leaving the soil and entering our atmosphere as carbon dioxide and nitrous oxide – two powerful greenhouse gasses. In fact, scientists believe that roughly one third of the total man-made changes in atmospheric CO2 is from land use change – things like deforestation, and agriculture (the other two-thirds is from burning fossil fuels).

But there’s good news, too: we know how to restore our soils and the carbon they retain, and over the past several years, innovative farmers and scientists have begun using carbon offsets to help finance that transition.

There are several ways to retain soil and help return soil to its former healthy, nutrient-rich glory. Ranchers can help reduce erosion by changing their grazing practices, concentrating herds in temporary pens and rotating grazing areas to let unused areas regrow. Instead of monocropping, farmers can use more diverse crops to help balance the nutrients in the soil. Cover crops, like mixing taller fruit trees with ground crops, covers the soil and reduces erosion. Another way is to replenish the soil by using compost.

By some estimates, techniques like these could help offset over 50 percent of global greenhouse gas emissions annually over the next several decades.

But changing the ways things are done takes time and money – and that’s where carbon offsets come in. Carbon offsets are units of greenhouse-gas emission-reductions, usually measured in metric tons of “CO2e,” or “carbon dioxide equivalent.” CO2e is a standardized measurement based on the “warming potential” of different gases.

Offsets are generated by projects that reduce, avoid or sequester greenhouse gasses – by, say, planting trees or saving forests. These offsets can then be sold to companies or people who want to reduce their emissions but aren’t able to do it all directly.

Carbon standards, like Verra (formerly the Verified Carbon Standard) or the Gold Standard, use methodologies specific to different project types to calculate exactly how much carbon a project prevents or removes. The first soil carbon methodology for the voluntary carbon market came out in 2012. Since then, soil carbon offsetting has spread around the world.

In Kenya, over 60,000 small-holder farmers have switched to more soil-friendly farming practices through the Kenya Agricultural Carbon Project (KACP) – including rotating crops, using manure to fertilize and mulch to prevent weeds, and stopping tilling their land. As a result, they’ve stored an estimated 60 million tonnes of carbon per year while increasing yields by as much as 30%.

In the United States and Canada, so called “Soil Carbon Cowboys” are changing the way they graze cattle. By moving herds between small temporary pens, they allow other areas to regenerate, mimicking the grazing patterns of wild bison herds.

In Australia, soil carbon has been incorporated into the national climate change strategy. The Emissions Reduction Fund, which the government launched in 2014 to contract carbon offsets from projects around the country, has two different methodologies for sequestering carbon in soils. Although neither has yet been used, the Australian government is in the process of drafting a review and potential expansion of soil carbon methodologies.

In Austria, the non-profit ÖkoregionKaindorf runs a “Humus Building Program,” where companies help farmers shift to climate-safe agriculture by paying them for each ton of CO2e their new activities infuse into their soil. The program currently works with 140 farmers on 1500 hectares of land, storing an average of over 10 tons of CO2e per hectare per year – the equivalent of almost 25,000 miles in a passenger car.

Projects and programs like these have capitalized on soil’s ability to put carbon in the ground, and have demonstrated a slew of other benefits – especially for farmers and our waterways.

Farmers, for example, rely on healthy soil to grow crops. As healthy soil washes away, farmers lose one of their most valuable resources. Carbon offsets not only provide additional income, but most farmers also find that using these climate-smart methods makes their farms more productive. Carbon-rich soil is better at retaining water, reducing the need to irrigate. It also retains more nutrients than unhealthy soil, reducing the need for fertilizers, and produces healthier food.

Rebuilding soil carbon improves water quality too. When heavy rains wash exposed soils into our waterways, the influx in sediments and nutrients disrupt the fish and other organisms living in our streams, rivers, lakes, and even along our coasts. In extreme cases, these nutrients can feed so much algae growth that no other species can survive – a phenomenon known as “dead zones.” Good soil management keeps silt and nutrients out of our rivers, keeping surface and groundwater cleaner.

What’s Next for Soil Carbon?

Not a week goes by without a new study pointing to the massive potential for soil to act as a carbon sink, and two years ago the French government launched its “4 per 1000” initiative, which aims to increase the amount of carbon in the world’s soils 0.4 percent every year – something the French Ministry of Agriculture says could halt the rise in greenhouse-gas emissions.

Carbon finance can certainly play a role, but Ecosystem Marketplace has never tracked more than two transactions of soil carbon offsets in a single year on the voluntary market – in part because the payments per hectare are too small to make such projects worthwhile on their own.

As the Kenyan experience shows, however, those small payments can be used to jump-start sustainable agriculture programs across large areas, where the true value comes in the form of higher yields, cleaner water, and more resilient farming systems.