Earlier this year, a group of prominent senior Republican leaders, including former Secretary of State James A. Baker and former Secretary of State George P. Schultz, proposed a national carbon tax as a “conservative climate solution.” Now two prominent Democrats have presented their proposal. Will a price on carbon emerge as a pivotal issue in the mid-term elections? 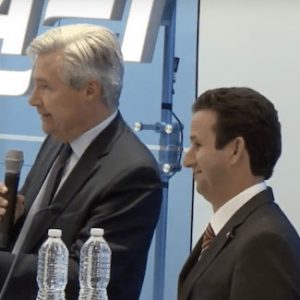 29 July 2017 | “Find me a Republican.” That was the call from Senator Sheldon Whitehouse (D-RI) at the American Enterprise Institute on the afternoon of July 26. He and Senator Brian Schatz (D-HI) appeared at this conservative think tank to discuss their American Opportunity Carbon Fee Act of 2017. Introducing this carbon pricing bill is a move that will continue to elevate carbon pricing in the public conversation—a conversation that would really move forward if Republicans were to jump on board.

These two Democratic senators know that bipartisanship is the way to go when it comes to climate legislation. They also know that carbon pricing is the most likely to gain traction on both sides of the aisle and in the court of public opinion. To that end, several Democrats have introduced carbon pricing bills in the past. In fact, Whitehouse and Schatz originally introduced a very similar bill in 2015, but it never made it out of committee. Now they’re back, hoping that the time is right for broad, bipartisan support of their legislation. And as Sen. Whitehouse said, the search is on for Republicans to co-sponsor this bill and champion a market-based solution to climate change.

Let’s explore the details of the bill and CCL’s take on it.

Their bill would place a fee of $49 per ton on CO2 in 2018, with a 2% increase annually above inflation. Once emissions reductions reach 80% of 2005 levels, the rate of the annual fee increase would drop to just the value of inflation. The bill also imposes the same fee on fluorinated gases produced in the U.S. or imported, which is an update from the 2015 version.

$49 per ton is a pretty hefty fee, and estimates are that $2.1 trillion in revenue would be generated in the first decade alone. The bill lays out three different uses for all that money:

First, it would make it possible to reduce the top marginal corporate tax rate to 29% from its current 35%. To appease business employees as well, the bill would offer workers an inflation-adjusted refundable tax credit up to $550 to offset their payroll taxes. For a married couple this would amount to $1,100 yearly. This wouldn’t be physical cash in the bank, but instead, it’s a reduction in workers’ taxes.

Lastly, the bill commits at least $10 billion annually in grants to help states address their low income and rural households directly, as well as help workers transition to new industries from fossil fuels.

The bill also includes a border adjustment, with refunds to American companies that are determined to have a competitive disadvantage.

There are also a few exemptions to the fee. If a company can sequester carbon, find non-emitting uses of fossil fuels, or even destroy excess greenhouse gas equivalents without releasing any emissions, they could receive a rebate.

Oh, and one more bonus: Rep. Earl Blumenauer (D-OR) and Rep. David Cicilline (D-RI) have introduced identical language into the House. That means a carbon fee is officially up for discussion in both chambers of Congress.

We want to give Senators Whitehouse and Schatz major props for visiting the conservative American Enterprise Institute to discuss the bill. This shows how serious these Democrats are about attracting across-the-aisle support for carbon pricing. As Sen. Schatz said at yesterday’s AEI event, “There are partisan issues, but climate cannot be one.”

When it comes to the details of the bill, there are some significant departures from CCL’s Carbon Fee and Dividend. The initial price is much higher than our $15 per ton, and the rate of increase is slower than our $10 per ton per year. The bill does offer some interesting new ideas about how the dividend could be returned, though we would prefer a straightforward and equal 100% dividend of net revenue to households, rather than a portion going to corporations.

That said, it’s encouraging to see Democrats continue to push for carbon pricing, as they have in the past. A carbon price is a straightforward, effective, large-scale measure we can take to turn the tide on our global emissions, and therefore on climate change. We’ll be keeping an ear out for updates from Schatz and Whitehouse regarding this legislation—and we hope their colleagues heed their call for support.