The Democratic Republic of Congo is enjoying a tenuous peace, and that makes the forests safe again. Such peace has a downside, however, and illegal palm oil plantations have already begun opening along the edges. Here’s how one district is using forest carbon to save endangered forest. 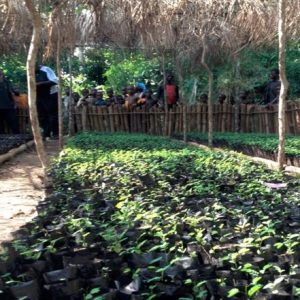 9 November 2015 | STOCKHOLM, Sweden | “I grew up in the jungle,” Jean-Robert Bwangoy, a geospatial analyst from the Democratic Republic of Congo, told a room full of business and policy representatives in Stockholm at REDD+ Talks here last week. “I was taught that if you are a strong man, your value is the number of hectares you can cut down.”

He left his village as a teenager to attend boarding school in Kinshasha, then went on to get a bachelor’s degree from Universite Laval in Québec, a master’s degree from the University of Redlands in California, and finally a PhD from South Dakota State University. Now he’s come home and is running a project that saves endangered forests as project manager of Wildlife Works’ avoided deforestation project in Mai Ndombe.

His education made him an expert in using remotely-sensed data to analyze land-cover change in the Congo Basin, which, at more than 150 million hectares, is the world’s second largest tropical rainforest, after the Amazon. The DRC’s forests store about 24 billion metric tonnes of carbon, which would become 88 billion tonnes of carbon dioxide if the forests are destroyed. That puts it on a par with Indonesia’s – largely because, like Indonesia, many of its forests are growing on carbon-rich peat bogs.

One of the unintended side effects of years of civil war in the DRC was forest protection due to stunted infrastructure and economic development.

“It’s not because they don’t have fabulously valuable timber. They do,” said Mike Korchinsky, founder and president of Wildlife Works. “But what they haven’t had is anybody willing to go into a forest with a chainsaw when there are 15-year-olds in there with an AK-47. So that has helped enormously to keep the deforestation rates down, artificially, in the Congo.”

Peace has already begun to open up new threats. Research published last year by Forest Trends found that the Congo Basin may be the next ground zero for industrial palm oil development, with three massive plantations recently opened in the DRC’s western neighbors of Cameroon, Gabon, and the Republic of Congo – two of them operating illegally. Another 10,000-hectare palm oil concession contract recently issued to Congo Oil & Derivatives SARL in the DRC was also found to be illegal since it is located within two forest reserves.

“While countries like Brazil and Indonesia have been battling illegal agro-conversion for many years, the problem is expanding to new countries and regions of the world,” report author Sam Lawson wrote, citing several recommendations for both producer and consumer countries to bring commodity production into the legal realm.

But preventing a deforestation free-for-all in the Congo Basin will require more than just addressing illegal palm oil concessions. People will also need to see the value in standing trees, according to Korchinsky.

“As long as there is a value associated with saving forests, they’re very open and willing to listen to that conversation and move down that path,” he said.

Quantifying the carbon associated with Reducing Emissions from Deforestation and Forest Degradation (REDD+) is one way to assign that value. Wildlife Works’ Mai Ndombe REDD+ project currently covers about 300,000 hectares of a former logging concession and is expected to reduce more than 100 million tonnes of carbon dioxide emissions over the next 30 years – offsets that could potentially be sold to companies, governments, or even individuals.

Beyond the 300,000-hectare project, Mai Ndombe is now working on establishing a province-wide program to protect all nine million hectares of forest within Bandundu Province. Dozens of regions and countries are experimenting with such “Jurisdictional REDD+” initiatives, according to Ecosystem Marketplace’s State of Forest Carbon Finance 2015 report, released this week.

In Jurisdictional REDD+, an entire country – or a state within a country – receives funding to reduce emissions from deforestation and degradation. Individual projects like Wildlife Works’ can then “nest” within these efforts, provided the emission-reductions aren’t double counted.

More than a hundred forest carbon projects are already established within states or countries moving forward with REDD+, and many are grappling with how to “nest” within jurisdictional efforts – a process that often requires working with regional governments to establish common deforestation baselines and align other technical practices.

The Demand Elephant in the Room

Jurisdictional REDD+ programs could unlock a new category of carbon finance in the form of contracts for emissions reductions signed between governments. While market-based payments for forest offsets reached an all-time high of $257 million last year, bilateral contracts for emissions reductions, usually signed between governments outside of market mechanisms, are becoming more common. More than $1.1 billion in non-market payments have been made to date, mostly to Brazil, but another $1.2 billion is on the table to be committed to more than a dozen tropical forest countries.

Jurisdictional REDD+ programs could also be attractive to the growing number of commodity companies that have made commitments to reduce or eliminate deforestation from their supply chains and are now struggling to establish sourcing criteria for their suppliers. A handful of companies – including Danone, Disney, Kering, Marks & Spencer, and Natura Cosméticos – have both deforestation commitments and carbon offsetting programs, though the two are not necessarily connected within corporate strategy.

Still, most REDD+ projects can’t wait for nesting processes to resolve to sell tonnes. Project developers active in the forest carbon markets reported that 51.2 million tonnes of carbon dioxide remained unsold in their portfolios at the end of 2014, meaning that they found buyers for fewer than half of the offsets they hoped to transact.

“The success of the project relies on continued and increased sale of carbon credits,” said Emily Mwawasi, the Community Relations Officer from Wildlife Works’ Kasigau Corridor REDD+ project in Kenya.

Kasigau was the first REDD+ project to issue and then retire offsets under the Verified Carbon Standard, the major certifier of avoided deforestation offsets, which are currently only eligible on voluntary markets.

Ecosystem Marketplace projections show that supply will continue to exceed demand on the voluntary forest carbon markets in the absence of very positive policy signals. But those signals could potentially materialize at the United Nations Framework Convention on Climate Change this December, where REDD+ finance will be a part of the negotiations.

Governor Jerry Brown of California plans to attend the talks, and experts expect he’ll have something to say about the role of REDD+ in the state’s cap-and-trade program, currently the most active compliance market for forest carbon globally.