Skip to content
Sheldon Zakreski, Director of Carbon Compliance for The Climate Trust

The vast majority of economists advocate putting a price on carbon, and most people generally argue that a higher price will drive down emissions the fastest. But focusing on price first, instead of efficient emission reductions, could do more harm than good, argues Sheldon Zakreski, Director of Carbon Compliance for The Climate Trust. 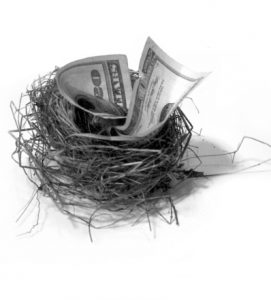 6 June 2016 | There has been a lot of focus lately on the growing number of jurisdictions that have put or are considering putting a price on carbon. The World Bank estimates that 40 countries and more than 20 cities, states, and provinces have a price on carbon.  And, by the way, welcome to the club, Ontario.

But lost in the discussion is the range of costs from different measures that reduce a metric ton of carbon dioxide (mtCO2). I’m not talking about the overall impact on the economy. Instead, the question is what actions deliver the biggest bang for the buck? The implementation of a carbon price policy doesn’t necessarily guarantee the cheapest reductions will occur. Policies that tout emission reduction benefits, but don’t consider cost-effectiveness represent a missed opportunity. By not focusing on incentivizing the cheapest reductions to occur first, carbon policies run the risk of potentially exacerbating economic shocks associated with implementing a carbon price, and increasing resistance among companies and households that need to integrate carbon costs into their decision-making. Therefore, there is a lot of value in examining how a carbon price policy can incentivize the lowest cost reductions to happen first.

Where are the Low-Cost Reductions?

The California Legislative Analyst Office (LAO) recently came out with a revealing report on the costs per metric ton of reductions for different measures the State is funding through its cap and trade auction revenues (see sidebar). Under California’s cap-and-trade system, the state auctions carbon allowances to regulated entities, and uses the revenue from these auctions to reduce greenhouse gas emissions further. The costs range from less than $10 per mtCO2 for activities such as forest health, biogas digesters, and composting, to hundreds of dollars per mtCO2 for single-family solar photovoltaic installations, solar hot water heating, and truck and bus voucher incentives. The LAO estimates the average overall unit cost of these measures is $57 per mtCO2. For reference, the current floor price for California’s carbon allowances is $12.73 per mtCO2. 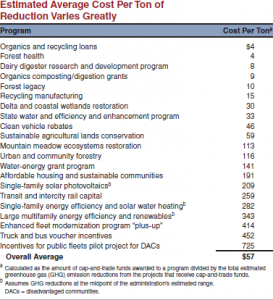 The current price for an offset in California is between $10 and $11 per mtCO2. The fact that California’s cap and trade system has issued approximately 39.6 million offsets to date from forestry, ozone depleting substances, coal mine methane, and livestock digester projects is indicative that these sectors can generate meaningful reductions that don’t hamper economic growth. Indeed, the inclusion of low cost reductions in California’s program has been a contributing factor to the state’s economic well-being, since cap and trade came into effect in 2013. In fact, California outpaced the national average job growth rate in the first 18 months following the start date of its cap and trade market.

As to the two additional eligible offset sectors in California (rice and urban forestry) rice management is a new sector, and it remains to be seen the extent to which it can generate low-cost reductions for the California program. Referring back to the LAO graphic, the fact that the average cost of reductions for urban forestry is $116 explains why this offset sector has contributed none of the 39.6 million offsets used in California – despite being one of the first eligible offset sectors back in 2012.

While it is possible for both a carbon tax and a cap and trade program to encourage low cost reductions, the latter has several advantages. Namely, cap and trade systems can be designed to bring in offsets from sources beyond their borders. Cap and trade also gives regulated entities more leeway to find those lowest cost reductions, and avoids what Denny Ellerman, a retired Massachusetts Institute of Technology economist, refers to as “the soft corruption” of legislation picking what may not be the most cost effective solution.

To illustrate this point, governments with a carbon tax policy may be tempted to select politically popular carbon reduction options. For example, if the government led with solar photovoltaic installations as a way to reduce emissions, based on the LAO analysis in California it would cost over $8 billion to generate 39.6 million tons of emission reductions. This is twice what California has raised to date from allowance auctions, and well more than 20 times the cost to produce the equivalent amount of reductions in the form of offsets under California’s cap and trade program. The many merits of a cap and trade system make it the superior solution to achieve low cost reductions.

The growth of carbon prices throughout the world is a positive development, but the extent to which these systems ignore low-cost reduction opportunities does a disservice to our economy and the planet. The optimal approach incentivizes the lowest-cost reductions to occur first, reduces the negative impacts of a carbon price on low income families, limits job losses in trade exposed sectors, and minimally impacts the overall growth of the economy. Such low-cost reductions are not intangible, pie-in-the sky goals—they can be achieved through cap and trade programs that allow for the inclusion of a variety of offset types, and from a broad range of geographical sources.