A gigawatt of installed renewable energy saves 42 species from going extinct due to climate change. Let’s find a way to acknowledge that in policy and regulation. 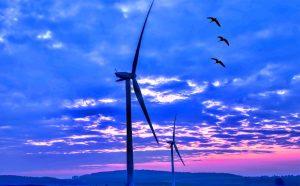 13 January 2021 | Eighteen to thirty percent of the species on the planet (8.7 million species) are at risk from the climate change that will occur if America and all countries do not rapidly shift to a net zero climate footprint. Using Energy Innovation scenarios, the U.S. needs to install approximately 750 GW of additional wind power and 550 GW of solar by 2050 to help prevent us from tripping into that extinction apocalypse.

Many of those renewable projects, especially ones on federal lands, require permits or authorizations under the Endangered Species Act, Bald and Golden Eagle Protection Act, or other wildlife laws and go through an environmental impact analysis or assessment. However, today when those projects are reviewed, only their negative impacts on wildlife receive consideration.

Yet these are projects that will themselves prevent wildlife extinctions because of the kind of energy transition they deliver.

What might the beneficial cumulative effects analysis of this build-out look like for wildlife? How many extinctions would U.S. wind and solar development prevent? Here is a back of the envelope calculation.

Put those numbers together and each gigawatt of installed solar or wind power is responsible for approximately 42 prevented species extinctions somewhere on the planet. Or to break it down further, every ten (2.5 MW) wind turbines installed prevent an extinction somewhere.

A wind farm like Shepherds Flat in Oregon, with 338 2.5 MW turbines, is tied to approximately 33 prevented extinctions of species. The Gemini solar project outside of Las Vegas would prevent 29 extinctions, or one extinction prevented for every 250 acres of solar panels installed.

NEPA, eagle permits, or endangered species permits and authorizations do not have any ready procedure through which to account for these beneficial effects or to discount mitigation requirements for other harmful effects on specific species, but documenting these benefits is nonetheless important. For example, the documentation would provide a strong connection between projects and public biodiversity conservation goals and could be use as the basis for public subsidy of required wildlife mitigation, funding for additional permit review personnel, or policy that gives a more favorable tax treatment to the wildlife mitigation expenses of renewables projects.

A programmatic EIS on a national wind and solar installation 2050 goal could establish a consistent basis for standardized analysis of these kinds of benefits on tiered project by renewable energy project reviews.

Impacts on a specific species must not be ignored because of benefits to other species, distant in time or space. Those impacts on endangered species, migratory birds, or eagles still need avoidance or offsetting. But its common sense that projects that create modest harms and major benefits get treated differently than projects that only create harms.

If we are going to solve climate change and mitigate its immediate impacts, we need a wildlife agency that is able to speak up for all wildlife species, through analysis like this, and policy that incorporates the analysis into decision-making.