The public can now comment on a decision by the Trump administration to repeal a rule that would protect 60 percent of stream miles and the drinking water of one in three Americans. 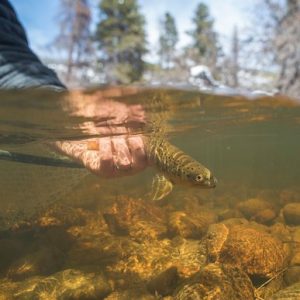 27 July 2017 | In June, the Environmental Protection Agency announced that it would begin the process of repealing the 2015 Clean Water Rule that protects such streams,however the opening of the 30-day comment period was delayed until today.

The repeal would roll back protections on small (headwater/ephemeral) streams that were in place for the first 30 years of the Clean Water Act. After these protections were called into question by conflicting court interpretations, the Clean Water Rule was developed to provide clarity and certainty regarding protections. The Rule was developed over a multi-year process with extensive public comment and scientific review, which culminated in 2015.

“Clean water is not political. It’s not partisan. It’s a basic right in this country,” said Chris Wood, President and CEO of Trout Unlimited. “We rely on cold, clean water not just for healthy populations of fish and wildlife and drinking water. The health of these streams is also a vital part of the nation’s outdoor economy which provides millions of jobs and generates billions of dollars annually. Water runs downhill, gravity works cheap, and it never takes a day off. We all live downstream. This action places the health of our streams and rivers and in turn, our families, jobs and economy at unacceptable risk.”

Recently, 22 Senators called on the EPA and U.S. Army Corp of Engineers to extend the comment period to 90 days.

“The 30-day comment period EPA proposes in its Notice of Proposed Rulemaking is far too short to allow full review, careful analysis, and heartfelt feedback from as many of the millions of Americans potentially impacted by this endeavor as wish to share their views, including the 117 million (or one in three Americans) who receive drinking water from the water bodies affected by this proposal,” the Senators wrote.

Despite requests for a longer comment period, the window currently stands at only 30 days.

For more information, go to standup.tu.org and click on “clean water.”