Eight years after the state of Colorado launched a private/public voluntary carbon offset program that encourages low-emission driving, the Colorado-based Natural Capitalism Solutions is taking the wheel and intends to steer the Colorado Carbon Fund toward projects that mitigate climate while delivering social and economic benefits. 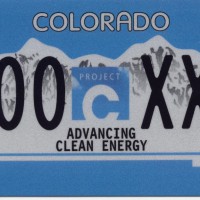 29 June 2016 | Colorado resident Sandra Laursen was looking for a way to reduce her own personal greenhouse gas emissions, and today her car sports a Project C license plate that reads “advancing clean energy.”

“I wanted to put my money where my mouth is on the issue of climate change,” says Laursen, who taught climate-related topics for several years and currently works at Colorado University in Boulder, researching science and math education.

The Project C license plate is an initiative within the Colorado Carbon Fund (CCF) and is one easy way Coloradans can contribute to emissions reductions in the state.

Initiated by the Colorado Energy Office in 2008, the CCF is the first voluntary, state-based program to help individuals and businesses offset their greenhouse gas emissions. According to a CCF statement, over 1,000 individuals and 74 Colorado organizations have used the program to reduce their emissions, producing 39,000 certified carbon offsets.

Until this month, however, the CCF was an endangered program, as its administering organization decided late last year it would no longer be able to manage it.

The Colorado Energy Office chose The Climate Trust early on to administer all facets of the initiative, and that’s included outreach and marketing, even though its expertise is on the technical side of running an offset program – an expertise that is increasingly in demand as compliance markets like California scale up. Shelden Zakreski, the Director of Carbon Compliance at The Climate Trust, says The Trust underwent some internal shifting in the last year and determined it no longer had the capacity to manage the CCF.

In response to The Trust’s announcement, the CCF’s Advisory Committee launched a search for a new administrator that was spearheaded by environmental consultant Kate Hamilton who also sits on the Advisory Committee (Disclosure: Hamilton also served as a Director of Ecosystem Marketplace) and The Climate Trust. On June 1, they found new leadership in the Colorado-based nonprofit Natural Capitalism Solutions (NCS), which offers sustainability services to businesses and governments.

The Colorado Energy Office initially chose The Climate Trust for its technical expertise: namely, in identifying and managing offset projects as well as overseeing the fund’s accounting, which was needed to build the CCF and then transition it from a government initiative into a standalone program, says Zakreski. He adds, however, that the Trust doesn’t have a strong capacity in the marketing component: namely, outreach, awareness-raising, and education.

“The Climate Trust has never really been set up for that front-facing work,” he explains, adding that’s even more so after the Trust tightened its focus last year with the launch of the Carbon Investment Fund. The Carbon Investment Fund will design and build carbon offset projects in specific fields like forestry and grasslands to use in compliance carbon markets like the one in California.

“As there is a lot of work we have to do to get the Carbon Investment Fund off the ground, we need to narrow our business model,” Zakreski says. “We couldn’t really give the CCF the care and attention it deserves.”

According to a statement, The Climate Trust feels NCS is a good choice because of the organization’s strong leadership in sustainability and climate mitigation, working with both the public and private sector.

The Project C license plate is a key and popular component of the CCF. It enabled the fund to function over the last couple of years as the plates are awareness-raising and emissions-reducing mechanisms rolled into one, Hamilton says.

The plates are also the fund’s primary source of finance. Buyers must make a $25 donation to the CCF, and they’re encouraged to offset at least 50% of the greenhouse gas emissions they generate by driving.

“It’s a way of advertising that you’re aware of the impact you’re making on the climate, even if you are driving a vehicle,” Hamilton says.

Laursen learned of the CCF through the license state program, and she says the plate not only advertises her own sense of urgency about climate change but also her belief that market-based solutions such as carbon offsets are one important part of the solution.

All of the carbon projects used to offset emissions are locally-based, supporting clean energy and “climate benefit” projects for communities and lands across Colorado. Zakreski notes these locally-based offsets, which deliver recognizable benefits to the state, as a cornerstone of the program.

The CCF helps people manage their emissions not just from driving but also from flying on airplanes and using energy in their homes. The fund uses a relatively simple three-part process. First, interested individuals, households and businesses use the fund’s online calculator to measure their carbon footprint referring to the aforementioned three activities. Then CCF offers ideas and tips as to how these groups can monitor their impact and reduce emissions. Finally, the fund provides tax deductible offsets for the part of their environmental footprint that can’t be controlled or reduced.

Hamilton and Zakreski both note the importance of having a Colorado-based nonprofit run the CCF as it is unique to the state. And Peter Krahenbuhl, Director of Strategic Partnerships and Consulting at NCS, agrees.

“We felt that it was high time to bring the CCF back to Colorado,” he says. “Only in doing so, through a home-grown, home-based nonprofit with expertise in global climate change and regenerative economy work, can the CCF truly realize its full potential in helping the state to be a global leader in sustainability.”

Hamilton says the search always focused on a nonprofit, as several of the fund’s provisions, such as the license plate program, must be administered through a nonprofit.

Plus, Krahenbuhl has experience in the carbon markets, working directly in this area for some time, which is another reason they found NCS to be a good fit. In short, Hamilton says they chose NCS because it’s capable.

“NCS is a small innovative organization that really stepped up to the plate,” she says.

Big Plans for the CCF

NCS seems pleased with its new leadership role. The nonprofit’s Founder and President and well-known champion of sustainable development, Hunter Lovins, said in a statement they are delighted to take stewardship of the fund.

“This transition will allow us to figure out next steps for this iconic Colorado institution and enable it to become the tool Colorado needs to begin implementing the world’s goal of fighting climate disruption,” she said.

Krahenbuhl said they’re still reviewing their options and opportunities and don’t have a crystal clear picture of what the CCF will look like in coming years but they know they want to grow the program and expand its scope. He mentions NCS is looking at grassland restoration and soil biosequestration projects and supporting ways in which to support local economic activity through holistic management.

NCS has grand plans that appear bigger than offsetting projects. Krahenbuhl said: “What we aim to do with the CCF beyond offsets is to develop climate benefit projects that connect climate mitigation, ecological integrity, social and economic benefit in a way that Colorado businesses and people can be proud of investing in to support their own future.”