Nature-rich Colombia aims to accelerate its efforts to reduce greenhouse-gas emissions by encouraging the use of voluntary carbon markets to save endangered forests. Tomorrow, the country’s voluntary carbon exchange will execute its first transactions, with cap-and-trade possibly following down the road. 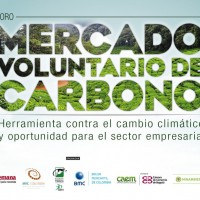 17 August 2016 | When Colombia signed the Paris Climate Agreement last year, it pledged to keep its greenhouse-gas emissions to a level at least 20% below projections by 2030, in part by encouraging home-grown companies to conserve forests through voluntary carbon initiatives and later by imposing mandatory caps or taxes on certain sectors.

Tomorrow, the country will launch the Colombian Voluntary Carbon Market Platform (CVCMP), culminating six years of development that included extensive education and awareness-building. Three companies have already committed to purchase offsets – one from the finance sector, one from education, and one from energy – and their names will be released tomorrow in a ceremony hosted by the magazine Foros Semana and live-streamed here.

Although created for voluntary offsets, the platform can also be used to facilitate mandatory emission-reduction initiatives, such as a carbon tax or a cap and trade system, which the country is currently considering as part of its efforts to increase ambition under the Paris Climate Agreement.

First reported by Ecosystem Marketplace in 2010, the platform will only list offsets generated and verified in accordance with recognized carbon standards. Details have not yet been released, but representatives of both the Verified Carbon Standard and the Gold Standard will participate in tomorrow’s event.

All listed projects will be home-grown, domestic projects, and phase-one projects will only be those that conserve or restore Colombian forests.

The launch culminates a nationwide educational effort designed to stimulate demand, and it has already generated widespread media attention in mainstream publications such as Foros Semana and La Republica.

“The platform is just the cherry on the cake, because it caps efforts that have been underway over the past 5 years, both internationally and domestically,” says Roberto Leon Gomez Charry Deputy, Director of Institutional and Local Development at the environmental NGO Fundación Natura, which spearheaded the exchange’s creation. “It is a tool that…can used to improve the country’s climate ambition in order to exceed the national contribution presented last year in Paris.”

For more on the genesis of the project, read “New Voluntary Carbon Platform Rooted In Colombian Forests”

Voluntary carbon initiatives have long been dogged by lack of demand – due in part to a lack of understanding on the part of potential users. To solve that problem, Fundación Natura has launched an education campaign designed to help private-sector emitters understand climate change and its impact on their business, as well as to provide training in the calculation of carbon footprints and structuring emission-reduction programs.

Gomez Charry says that at least 60 domestic companies have already participated in the program, and that the platform will also be available to international buyers.

Who will Manage it?

The platform will be managed by the Colombian Stock Exchange (la Bolsa Mercantil de Colombia) in cooperation with the Ministry of Environment and Sustainable Development and technical support from Fundación Natura. Offsets will initially be listed, cleared and settled through the IHS Markit global registry, which tracks carbon offsets to prevent double counting, but the country is also creating its own domestic registry in accordance with the national development plan.

Ciro Calderon is a Program Associate at Ecosystem Marketplace. He can be reached at ccalderon@valorandonaturaleza.org.