With the Trump administration leaving the federal government essentially neutered on climate change as hurricane season gets underway, this annual meeting of mayors is set to assume an unusually high profile. Mayors from more than 250 cities will meet to discuss climate, crime, and other issues. 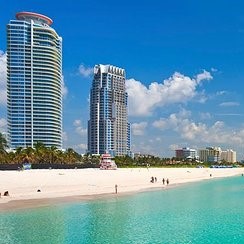 19 June 2017 | Miami-Dade Mayor Carlos Gimenez may be the odd man out near his home turf on Friday, as more than 250 mayors from around the country converge on nearby Miami Beach for the annual meeting of the US Conference of Mayors (USCM), which runs from June 23 to 26.

Climate change will top the agenda, while nine states and scores of cities, universities, and businesses have taken the  “We Are Still In” pledge to meet the  Paris Climate Agreement. Former New York Mayor Michael Bloomberg is also leading a coalition of global mayors committed to slowing climate change, while his Bloomberg Philanthropies has also pledged to cover some of the US shortfall in supporting the United Nations Framework Convention on Climate Change.

“Americans are not walking away from the Paris Climate Agreement. Just the opposite — we are forging ahead,” Bloomberg said in a statement. “Mayors, governors, and business leaders from both political parties are signing onto a statement of support that we will submit to the UN — and together, we will reach the emission reduction goals that the U.S. made in Paris in 2015.”

Although the USCM agenda has plenty of other pressing (and arguably more local) issues as well, such as gun violence and infrastructure, it opens with climate change, and that issue is sure to bleed into other agenda items such as infrastructure, security, and even crime. The event will award cash payments totaling more than $1 million to several initiatives, including some for protection from climate change.

Even Gimenez, a Republican who supported Hillary Clinton but has been loathe to openly support the Paris Agreement, told the Miami Herald that he’s willing to discuss storm protection and other issues related to sea levels.

The United States Conference of Mayors is a non-partisan organization for cities with a population of 30,000 or more.