UPDATE: 13 December 2014 | 11:17 GMT-5 | A new text is reportedly circulating among the negotiating groups, but the plenary scheduled for 11pm has been postponed until after midnight. 13 December 2014 | LIMA | Peru | 1:42pm GMT-5 | Negotiators meeting under the Ad Hoc Working Group on the Durban Platform for Enhanced Action (ADP) […] 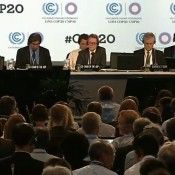 UPDATE: 13 December 2014 | 11:17 GMT-5 | A new text is reportedly circulating among the negotiating groups, but the plenary scheduled for 11pm has been postponed until after midnight.

13 December 2014 | LIMA | Peru | 1:42pm GMT-5 | Negotiators meeting under the Ad Hoc Working Group on the Durban Platform for Enhanced Action (ADP) here were unable to reach consensus on a stripped-down negotiating text that emerged early Saturday morning as least-developed countries objected to the removal of loss-and-damage provisions. COP President Manuel Pulgar-Vidal, however, says he will have a compromise text to present to the high-level negotiators meeting this evening as the 20thConference of the Parties (COP 20) to the United Nations Framework Convention on Climate Change (UNFCCC) convenes.

The new text emerged after intense one-on-one lobbying by negotiators from Singapore and Norway, acting at Pulgar-Vidal’s behest, and it eliminated the laundry list of items to be found in INDCs.

It also made no mention of land-use issues or loss-and-damage.

The Environmental Integrity Group and European Union acknowledged the text’s shortcomings but argued to send it up to the higher-level negotiatiors. Tuvalu negotiator Ian Fry, however, set the tone for opponents by rejecting any text that doesn’t deal with loss-and-damage and saying the text needed “surgery”. Venezuela, speaking on behalf of the Like-Minded Group of Developing Countries, reiterated that, but Singapore countered by saying that we can’t all have everything.

“If each of us submits just one item on a wish list, we will inflate this document beyond recognition,” said Singapore Environment Minister Vivian Balakrishnan, before offering what may be the most disturbing metaphor of the talks.

“Before embarking on any surgery, the most important question is whether it is necessary, and you have to ask, ‘What are the potential complications?'” he said. “If you are submitting for circumcision, be careful it doesn’t become an amputation because the surgeon used too big a knife and took too much flesh.”

New Zealand conceded there are “dead rats that need to be swallowed”, but also said “no sides have been ignored.”

With no consensus, the text was sent back to Pulgar-Vidal shortly before 1:30pm. He then announced that he will begin working with negotiating blocks individually starting at 2:30pm for a series of ten-minute meetings that will end around 5:30pm, and he promised to emerge with a new text to present to the COP this evening.