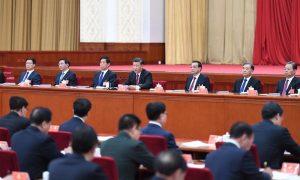 This story first appeared on the WRI blog. Photo: Xinhua

02 March 2021 | In the “Guiding Opinion[1]on Coordinating and Strengthening the Work Related to Climate Change and Environmental Protection” (hereinafter referred to as “Guiding Opinions”) published by the Ministry of Ecology and Environment (MEE) in January, the government has addressed several important and bold suggestions on the country’s national climate change policies. Considering the upcoming Two Sessions in early March and the heated discussions for a blueprint of the 14th Five-Year Plan (FYP), the timing and the messages delivered through MEE signals tectonic shifts in policymaking to tackle climate change.

In September 2020, Chinese President Xi Jinping made a surprising speech to the UN General Assembly that China would scale up its nationally determined contribution (NDC) by adopting more vigorous climate change policies and measures to peak carbon emissions before 2030 and reach carbon neutrality before 2060 (hereinafter referred to as 30&60 Goals). This “Guiding Opinions” supports President Xi’s ambitious 2060 commitment, and set the stage for the upcoming 14th FYP, which will detail necessary actions to secure the neutrality pledge and transform the whole economy.

MEE, originated from the former Ministry of Urban and Rural Construction and Environmental Protection (MURCEP) in 1988 and re-organized in 2018, had been putting ecological civilization and pollution governance on its top agenda for a long time. Climate change issues, meanwhile, were beyond its major priorities. The new “Guiding Opinions,” however, made a bold change in its phrasing by putting “climate change” ahead of “environmental protection.” In the Principle and Guideline sections, the document emphasized the overall planning of combating climate change and protecting ecological system, laying out a systematic approach toward the 30&60 Goals in the following sections.

Another new expression worth noticing is “carbon reduction.” MEE highlighted the role of carbon reduction as “the nose of ox” (a typical Chinese proverb meaning crucial and key) among all source control targets. The expression indicates that carbon is a higher priority than pollutants control – a major responsibility of MEE.

“Guiding Opinions” also brings in the concept of “dual control” — advocating advanced provinces to both control the per capital intensity and cap the total emissions of carbon dioxide. This marks a drastic shift from the previous intensity control-only regulations on energy consumption to an absolute cap, incentivizing markets to decouple economic growth and GHG emission. Home to the world’s largest population, China consumes over 50% of the world’s coal and is the world’s biggest GHG emitter. As a developing country, China has long emphasized its large population and relatively short development time, arguing to prioritize efficiency only to allow more flexibility and secure economic stability for its low-carbon transition. However, combating climate change is not about the impact of a single person or an average number; instead, it is the overall emission data that really matters and determines the actual temperature increase.

Apparently, over the past two years, lobbies and policy suggestions from environmentalists and researchers have largely facilitated the government’s understanding and action plans for climate change issues in the decades ahead.

For the world, China’s 30&60 Goals are a big step forward. It means an encouraging transition from “why” to “how” — from vision to workplan. But for many domestic provinces and industries, it changes the rules completely, and in an undesirable way.

One of the many challenges ahead is the “inertia” of those regions which have been heavily dependent on high-emission industries such as coal mining. An unrelated example from the sports world might help illustrate how painful the transformation could be. Over years of exploration and study, the Chinese Olympic national table tennis team built up a world-class lineup and system before learning that the game itself might be removed from the Olympics, making all their previous efforts useless. The same thing is happening within those carbon-intensive regions and industries. They spent years developing and catching up, struggled to optimize their structures and improve proficiency, and now they are forced to throw all their achievements away in less than 30 years.

All these challenges are real. The question now is how we can deal with them. In this regard, “Guiding Opinions” is valuable as it provides with some concrete guidelines:

The document suggests adding climate change-related content to central and local laws and regulations, specifically in areas such as environmental protection, resource and energy utilization, land and space development, and urban and rural planning and construction. In other words, MEE is providing strong recommendations to the other three government departments: National Development and Reform Commission (NDRC), Ministry of Natural Resources (MNR), and Ministry of Housing and Urban-Rural Department (MOHURD). The collaboration across departments can encourage more ambitious actions from advanced provinces and cities. For example, during Shanghai Municipal Two Sessions, the city put forward an ambition to peak before 2025, five years earlier than the country’s national pledge. We are also expecting the city of Beijing and Shenzhen to make ambitious announcements. In particular, we hope to see substantial progress from Beijing during the 2022 Winter Olympics. For any ambitious city, overall planning and collaboration across various functions and between central government and locals is a task to be solved. World Resources Institute (WRI) has seen the challenges and has already dug into a few regions, in the hope of shedding lights on solutions. A few of the outcomes include the recently published Accelerating the Net-Zero Transition flagship report focusing on Beijing-Tianjin-Hebei, Guangdong-Hong Kong-Macao Greater Bay Area and the Yangtze River Delta, and the CUT flagship report on cleaner urbanisation.

We have learned from Europe and the U.S.[2] that economic measures such as putting a price on carbon dioxide can be an effective way to make companies and individuals voluntarily reduce carbon dioxide emissions. There are already eight pilot carbon emissions trading markets in China, and “Guiding Opinions” has repeatedly emphasized these emission-trading systems’ capacity-building as major opportunities to develop green investment and green finance. The workplan is to experiment with the power sector (which makes up 30% of the nation’s emissions) first and then push the boundary from a few pilot cities to the whole country.

Another incentive is called the Science Based Targets initiative (SBTi), a powerful platform encouraging corporations to take more ambitious climate actions. More than 450 companies running business in China have already joined SBTi[3], including P&G, Estée Lauder, Coca-Cola, Dell and Adidas. We encourage corporations to get involved through various platforms and measures to achieve net-zero as soon as possible.

Furthermore, “Guiding Opinions” has also advised on using nature-based solutions (NBS) in the face of climate challenges. NBS can be a strong tool to enhance the protection of biodiversity and the governance of ecosystems including mountains, waters, forests, arable lands, lakes, and grasslands. It can also help strengthen climate resilience through climate adaptation, mitigation and environmental restoration.

“Guiding Opinions” talks a lot about building a positive relationship between the central MEE and the local departments. A unified legislation, implementation and supervision is essential to making ambitious actions happen. In the past, local governments have been autonomous when implanting environmental laws, whereas now MEE will be playing a bigger role. This new approach will largely increase work proficiency and add to MEE’s role in the overall planning.

Levels of actors should also include engagement from other parties, including NGOs, think tanks and research institutions. Taking advantage of observances such as Earth Day, World Environment Day and National Low Carbon Day are crucial to a sound narration of how China has progressed while combating climate change.

“Guiding Opinions” provides a feasible workplan across different industries, sectors and sub-sectors and points out the most important actions:

What more need to be done during 14th FYP

Although “Guiding Opinions” signals an obvious progress from the central government, gaps within across national and sub-national levels do exist.

One of the opportunities is to close the gap at the national level, especially in areas of necessary NDC enhancements, long-term strategy (LTS) and national (and sectoral) targets for non-CO2 reductions. With its 2020 climate targets met, China is on track to exceed the climate targets it set in its NDC in 2015. “Guiding Opinions” may wish to emphasize on the Paris Agreement mechanisms, particularly enhancing China’s NDC for more ambitious climate and energy targets and formulating an LTS and specific work plan to achieve 30&60 Goals, in line with the country’s mid- and long-term socioeconomic development strategy.

Another priority for the upcoming Two Sessions would be closing the gap across national and subnational efforts, and the central government splitting its overall goal to the appropriate provinces and cities wisely. Further guidance is needed on these five key issues:

[1] According to Thomson Reuters Practical Law, Guiding Opinions refers to the official documents issued by government authorities to communicate government policies and put forward non-specific and non-operational opinions and solutions on issues of importance to the Chinese authorities.

[2] A 2019 study by the American Council for an Energy Efficient Economy (ACEEE) finds that efforts to put a price on greenhouse gas emissions are growing in North America.

[3] The Science Based Targets initiative (SBTi) drives ambitious climate action in the private sector by enabling companies to set science-based emissions reduction targets. Currently there are 450 companies which run business in China have already joined SBTi. Worldwide, more than 1000 companies have already made commitments under the powerful SBTi.

[4] A modal share (also called mode split, mode-share, or modal split) is the percentage of travelers using a particular type of transportation or number of trips using said type. Modal share is an important component in developing sustainable transport within a city or region. In recent years, many cities have set modal share targets for balanced and sustainable transport modes, particularly 30% of non-motorized (cycling and walking) and 30% of public transport. These goals reflect a desire for a modal shift, or a change between modes, and usually encompasses an increase in the proportion of trips made using sustainable modes. (Wikipedia)