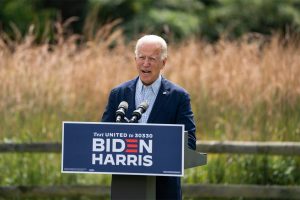 28 October 2020 | Among the myriad reasons world leaders will closely watch the outcome of a fraught US presidential election, the climate crisis looms perhaps largest of all.

The international effort to constrain dangerous global heating will hinge, in large part, on which of the dichotomous approaches of Donald Trump or Joe Biden prevails.

On 4 November, the day after the election, the US will exit the Paris climate agreement, a global pact that has wobbled but not collapsed from nearly four years of disparagement and disengagement under Trump.

Biden has vowed to immediately rejoin the Paris deal. The potential of a second Trump term, however, is foreboding for those whose anxiety has only escalated during the hottest summer ever recorded in the northern hemisphere, with huge wildfires scorching California and swaths of central South America, and extraordinary temperatures baking the Arctic.

“It’s a decision of great consequence, to both the US and the world,” said Laurence Tubiana, a French diplomat and key architect of the Paris accords. “The rest of the world is moving to a low-carbon future, but we need to collectively start moving even faster, and the US still has a significant global role to play in marshaling this effort.”

Few countries are on track to fulfill commitments made in Paris five years ago to slash their planet-heating emissions and keep the global temperature rise to “well below” 2C of warming beyond the pre-industrial era. The world has already warmed by about 1C since this time, helping set in motion a cascade of heatwaves, fierce storms and flooding around the planet.

Wildfires turned the sky over the San Francisco Bay Bridge orange this summer, the hottest on record in the northern hemisphere. Photograph: John G Mabanglo/EPA

Progress might have been different had Trump not triggered US withdrawal from the fight in 2017, complaining from the White House’s Rose Garden that the Paris deal “handicaps the United States economy in order to win praise from the very foreign capitals and global activists that have long sought to gain wealth at our country’s expense. They don’t put America first. I do, and I always will.”

Tubiana conceded the “Trump administration’s dangerous anti-climate stance has had a negative impact on international climate efforts”, pointing to backsliding by the rightwing governments of Australia and Brazil, which have variously sought to downplay or dismiss the need to cut emissions more rapidly.

Scientists say the world needs to halve its greenhouse gas emissions within the coming decade and essentially eliminate them by 2050 to avoid the worst ravages of the climate crisis. The four years that make up the span of the next US presidential term will be a crucial window of time in which emissions will have to be forced sharply downwards by major economies.

Trump has shown no inclination to use the US’s hefty influence to aid this effort, instead using a recent UN speech to attack “China’s rampant pollution”, just minutes before the Chinese president, Xi Jinping, used the same forum to announce the world’s largest carbon emitter would peak its emissions before 2030 and become carbon neutral by 2060. There needs to be a “green recovery of the world economy in the post-Covid era”, Xi said in a speech broadly welcomed by environmentalists.

To avoid the more dire versions of climate breakdown, the world will need to cut its emissions by about 7% each year this decade – a task that will only be achieved in 2020 due to a paralysis wrought by the pandemic that has shut down restaurants, factories, retailers, offices and other businesses.

The prospects of achieving this steep challenge would dim further with another Trump term, with the US and China now openly trading insults over each other’s climate policies. “It would be pretty much game over for the international system if he’s re-elected,” said John Podesta, who advised Barack Obama on climate policy. “China would feel zero pressure to do more and it would dampen ambition around the world. We’d miss the chance to avoid warming at a catastrophic level.”

The European Union has attempted to take up some of the climate leadership mantle that was forged for the US by Obama and then dumped under Trump. But diplomats see US engagement as crucial if meaningful progress is made at UN climate talks in Glasgow, shunted to next year due to the pandemic, where countries are due to explain how they are ramping up their climate efforts.

“Who wins between Trump and Biden will be hugely significant,” said Peter Betts, a former British government civil servant who acted as chief EU negotiator in the Paris talks. “If it’s Biden, he will convene an international summit to talk about climate, with the subtext that he’s there to talk to China. He will lean on all of the US’s allies around the world – Japan, Australia, Canada – while the EU and UK will raise their ambitions anyway. So a crucial element will be some sort of understanding with China.”

A Trump win, conversely, won’t completely sink the global climate effort, Betts said, but will lock in a longer, more damaging and more expensive resolution to the crisis. “If it’s Mr Trump, it’s going to be a harder path,” Betts said. “It’ll be harder for the EU to build momentum and harder to get other countries to do more if the world’s second largest emitter isn’t.”

The world will “breathe a sigh of relief” if Biden wins, Podesta said, but the tangible impact will be minor if the former vice-president isn’t able to implement an ambitious $2tn plan to create millions of new jobs in renewable energy and eliminate emissions by 2050. “When Donald Trump thinks about climate change, he thinks ‘hoax’,” Biden has said, referencing the president’s infamous dismissal of climate science. “I think ‘jobs’.”

In a US where the green economy employs 10 times as many people as the fossil fuel industry, Tesla’s market value has overtaken ExxonMobil’s and a pandemic-driven downturn has caused mass joblessness, Biden’s agenda polls well. But it would still be blocked if the US Senate is retained by Republicans who are largely opposed to climate action and have accused Democrats, without basis, of attempting to deprive Americans of hamburgers and flights in order to reduce emissions.

“The main thing Biden has to do is get the US’s own house in order,” said Podesta. “He would rejoin Paris on day one or day two, but the US wouldn’t have much credibility of he can’t make progress on getting to zero carbon. It’s not just about showing up, it’s about what you do.”

A victorious Biden would be warmly welcomed by other national leaders alarmed by the climate crisis, Tubiana said, but not much time would be spent celebrating the US’s return from the wilderness. “There is no turning back, the sun is setting on the fossil fuel industry,” she said. “In a year of undeniable climate impacts, the urgency of keeping warming below 2C has never been more clear.”

This story is published as part of Covering Climate Now, a global journalism collaboration strengthening coverage of the climate story. It first appeared in The Guardian.