UNFCCC Executive Secretary Christiana Figueres sees a key role for markets in verifying that the emissions reductions promised by countries in upcoming climate plans are actually achieved. The new bottom-up approach to the climate negotiations means that the era of carbon market experimentation underway in California, China, South Africa, and other places is likely to continue. 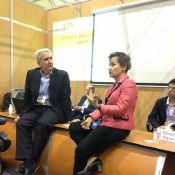 5 December 2014 | Lima, Peru |The first thing Christiana Figueres, the Executive Secretary of the United Nations Framework Convention on Climate Change (UNFCCC), did during her conversation with International Emissions Trading Association (IETA) President Dirk Forrister on Wednesday was rearrange the room. Sans microphones, Figueres and Forrister perched on the front of their desk and invited audience members to gather around fireside-chat style, with some people sitting cross-legged on the floor. It was a fitting arrangement for a discussion about carbon markets that have emerged from the ground up.

Countries are expected to lay the groundwork for submitting their Intended Nationally Determined Contributions (INDCs their national plans for action on climate change) in spring of 2015 at this 20th meeting of the Conference of the Parties (COP 20) in Lima, Peru. Though the role of markets in INDCs remains a question to be discussed over these two weeks of negotiations, Figueres sees their power to help solve one of the most perplexing conundrums of the climate talks: how the commitments countries eventually make to reduce emissions will be measured and enforced.

“I am very much a Clean Development Mechanism (CDM) enthusiast, and my enthusiasm is not just because of the offsetting potential or the market part of it but because it is such a valuable tool in verifying mitigation, she said. “I would not be surprised if the toolset of the CDM precisely to measure mitigation and verify is something that would actually be pretty inspirational to put it mildly for the Green Climate Fund (GCF). Executive Secretary of the UNFCCC, Christiana Figueres, and IETA President Dirk Forrister, engage in an informal chat during the COP in Lima.

Originally developed as a flexibility mechanism under the Kyoto Protocol, the CDM was envisioned as a way for developed countries to offset their emissions by investing in sustainable development projects. Since its inception, the CDM has registered 7,800 projects across 107 countries and verified 1.5 gigatonnes of emissions reductions more than the annual emissions of the United Kingdom, Saudi Arabia, and South Africa combined.

But CDM prices dropped to just cents per tonne around the end of the first commitment period of the Kyoto Protocol in 2012. Since then, many CDM project developers have been looking to sell their stranded Certified Emissions Reductions (CERs) on the voluntary carbon market. The significant drop in CDM prices presents an opportunity for more individuals to voluntarily offset their emissions, Figueres argued. Individuals accounted for 0.5% of voluntary offset purchases in 2013, according to Ecosystem Marketplace State of the Voluntary Carbon Markets report.

“CERs will never be as cheap, she said. “They will go up in price.

By encouraging individuals to voluntarily offset at more affordable prices, their comfort with the overall concept of offsetting can be accelerated. And this is the moment to do so because greater engagement with carbon markets down to the individual level is crucial, she said. “We actually have a huge psychological barrier to get to the concept of climate neutrality” if individuals are not encouraged to think about it on a personal scale, she said.

Working from the ground up

Emerging carbon markets such as California’s cap-and-trade system have taken the cue from the CDM market and implemented minimum allowance prices to mitigate the risk of significant price drops. But the question of demand remains an important one for any market-based mechanism emerging from the UNFCCC process.

“I think from a very simple lesson learned perspective from the CDM: If there’s no demand, it doesn’t matter how much supply you have, you just don’t have a market, hence prices fall,” Figueres said. “So I think certainly developing countries have been very much on the thought of, well first let’s see what the collectivity of mitigation targets, contributions, commitments – whatever noun you want to put to it – are going to be, and then let’s figure out how we’re going to get there.”

However, Figueres was asked how to respond to businesses impatient for the emergence of policy signals about potential future markets from these negotiations.

“I guess I would turn that around and say, well, but there is nothing there that says markets are not going to be there,” Figueres answered.

Countries such as China and South Africa are already developing carbon pricing mechanisms even without an international agreement in place. Eight jurisdictions in China are piloting emissions trading systems in anticipation of a national market emerging in 2016, and South Africa is also expected to implement a carbon tax that year.

As for the expected Paris climate agreement, the bottom-up approach means that countries will likely have considerable flexibility in applying market mechanisms, Figueres said.

With hundreds of different languages spoken at COP 20, INDCs are now part of the common vocabulary. But the concept of ground-up contributions is brand new – and much different from the top-down agreement envisioned at the inception of the UNFCCC process.

To Figueres, though, the idea of INDCs provides fresh perspective. Rather than viewing carbon mitigation as a punishment or a burden, countries are now very deliberately merging their climate and development agendas, she said.

“As I see it, that is the strength of [a bottom-up] agreement – that the driving force is going to be the national economy driving force, and you can’t have anything stronger than that,” Figueres said. “So when the driving force comes from the benefit that is going to be derived from those countries, that’s a very, very strong impetus. Then the question is what do we do if the sum total of that is not actually going to sum up to what science tells us we have to do? So that’s where the bottom-up meets the top-down and where the sum total of INDCs over time – not in the first iteration, but over time – will have to actually begin to close the gap.”