China’s national climate action plan will drive down emissions in part by ramping up the country’s already massive tree-planting programs. But scientists are still haggling over how ambitious to call the land-use target. China released the plan this week. 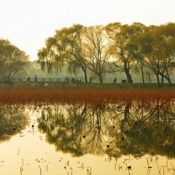 1 July 2015 | China will increase its forest stock by 4.5 billion cubic meters by 2030 if the country meets its proposed climate plan, released this week to the United Nations Framework Convention on Climate Change. The plan, known in climate negotiator speak as an Intended Nationally Determined Contribution or “INDC”, lays out the country’s intention to peak its greenhouse gas emissions no later than 2030 while making “best efforts to peak early.”

China’s commitment sets a year – 2030 – by which the country’s annual emissions must end their upward creep, but it doesn’t specify the altitude of this emissions summit – though multiple projections suggest it will likely be around 10 billion tonnes of carbon dioxide equivalent (tCO2e). In a “business as usual” scenario, researchers predict that China’s emissions would peak sometime between 2030 and 2040, between 12 billion and 14 billion tonnes, according to the World Resources Institute.

The emissions reductions goal was no surprise, since China’s INDC mirrored its half of the historic agreement it struck with the United States in November. But the target of lowering carbon dioxide emissions per unit of GDP by 60% to 65% under 2005 levels was new, as was the specific target on forests.

Forest and land use experts were tentatively excited about the inclusion of land-use in China’s INDC, though they’re still trying to parse out what exactly the tree-planting goal means.

“I was happy to see the INDC mention reducing the impacts of natural disturbances and improving their measurement methodologies over time,” said Pipa Elias, Senior Policy Advisor at The Nature Conservancy.

Under the Copenhagen Accord in 2009, China set a goal of lowering carbon emissions per unit of GDP by 40% to 45% from 2005 levels, in part by bumping up the country’s forested area by 40 million hectares and increasing the forest stock volume by 1.3 billion cubic meters. According to its climate plan, as of 2014 China was well on its way to meeting this land-use goal, with 21.6 million hectares reforested.

However, the INDC does not specify the hectare equivalence of the new 4.5-billion-cubic-meters target, and presumably some of this increase would occur in a “business as usual” scenario as the forests that have already been planted grow. Scientists are still doing the math on additionality, but the sense so far is that the commitment does indeed go beyond the Copenhagen Accord – the question is by how much.

China’s land-use sector is already a net carbon sink domestically, but its consumers’ demand for agricultural commodities is putting pressure on tropical forests in Brazil, Indonesia, Myanmar, and many other countries. China purchases 60% of the soy and 34% of the leather produced by tropical forest countries, according to the Forest 500, a project that ranks governments and companies on ‘forest-risk’ commodities. These Chinese imports are often produced at the expense of forests elsewhere.

Doug Boucher, Director of the Tropical Forest and Climate Initiative at the Union of Concerned Scientists, says the presence of land-sector actions in China’s INDC is a good thing, but the country could and should also pay more attention to its domestic agricultural sector.

China’s INDC does aim for “zero growth” in fertilizer and pesticide use by 2020.

“It is critical for countries like China to increase the efficiency of their agricultural systems to reduce the climate impact of growing food, but do so in a way that generates positive environmental and social outcomes,” said Elias.

China currently has seven jurisdictional carbon markets and plans to launch a national cap-and-trade program in 2016 that would be second in size only to the European Union Emissions Trading Scheme. Offsets from non-regulated sectors, known as Chinese Certified Emissions Reductions, are used to cover 5-10% of compliance entities’ emissions obligations in the pilot programs – a mechanism that will likely be carried over to the national program. Four new CCER methodologies target emissions from forestry and land use.

Allie Goldstein is Senior Associate in Ecosystem Marketplace’s Carbon Program. She can be reached at [email protected]