When the smoke cleared in Cuyamaca Rancho State Park after the 2003 Cedar Fire, almost every tree across 25,000 acres had been killed. Park managers waited a few years but saw no regrowth, so they did something somewhat unprecedented under California State Parks operations: they took matters into their own hands. With an influx of carbon finance from private sector partners, the Cuyamaca forest carbon project is now poised to issue its first offsets – but it’s been quite a waiting game. 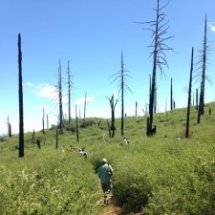 20 May 2016 | San Diego County, California | The view from Cuyamaca Peak is stunning: a mosaic of faded browns and muted greens and distant purples – and, in the foreground, the skeletons of the forest that covered this terrain until 2003. Even today, thirteen years after the Cedar Fire, Cuyamaca Rancho State Park feels a bit like a crime scene.

“I want you to get a sense of what existed before the fire: what we lost, and what we’re aiming for,” says Lisa Gonzalez-Kramer, who is managing the park’s restoration effort. “There’s no way to get a sense of that other than to experience it.”

She leads us down from Cuyamaca Peak, towards the appropriately-named Burnt Pine Trail, where we stepped into the last remaining “sky island” habitat, a shady oasis of sugar and coulter pine. Here, the hot May sun flickers through the branches and pine cones as big as our heads line the forest floor. Some of the trees look a bit toasted at their base, but they survived.

At Lisa’s request, we walk in silence for a few moments through the landscape the Kumeyaay people named “Cuyamaca” or “what the rain left behind.”

The visit was part of a tour associated with the Navigating the American Carbon World conference organized by the Climate Action Reserve (CAR), the standard behind what eventually became the Cuayamaca forest carbon project.

The Cedar Fire was the kind of natural disaster that is forever seared into nightmarish memory. The largest wildfire in California’s recorded history, it burned a total of 280,000 acres in San Diego County, killing 15 people, injuring more than 100 firefighters, and destroying more than 2,000 homes. Within Cuyamaca Rancho State Park, at least 95% of the trees were killed. Only about 400 acres – a few of which we walked through – were spared.

Some of the trees killed in the Cedar Fire were centuries old. They were here when the Kumeyaay were still grinding acorns into flour in smooth pockets of rocks still found throughout Cuyamaca. (Today, about 20,000 Kumeyaay live on reservations and elsewhere throughout San Diego County.) They were here in 1835, when Spanish settlers arrived and started grazing cattle and sheep on the landscape. And they were here on October 25, 2003, when a lost hunter set off the signal flame that would ignite the Cedar Fire.

Their trunks tell the story.

Mike Wells, a retired district superintendent for California Parks who now advises the restoration effort, places a smooth slice of trunk on the picnic table to show its fire scars:

“Taking Native Americans off the landscape coincides with the break in the fire regime,” said Wells.

It was the regular “fire regime” of the eighteenth century that reduced the risk of a catastrophic event like the Cedar Fire. Previously, low-intensity burns remained mainly on the forest floor, cleaning up the accumulated foliage without scorching the entire forest. Without this natural housekeeping for more than a century, a massive amount of debris built up on the landscape – so much that a casual signal flame set nearly the entire forest ablaze. 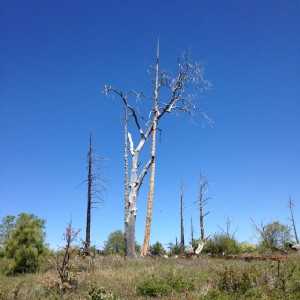 Climate change certainly doesn’t help matters. Dwindling snowpack, hotter temperatures, and reduced rainfall in southern California all increase the risk of forest fire. An estimated 7 million acres in California are at risk of burning in the next decade, and fire damages are expected to more than triple by 2050.

“We treat fires as if they’re preventable accidents,” said Wells. “We should be treating them like we treat earthquakes, that they’re an inevitable consequence of living here. We need a serious rethinking of our laws.”

No Regrowth without Intervention

Post-fire, the California Department of Parks and Recreation interferes only in cases of severe erosion threats, exotic species invasion, or further fire hazards. Barring these circumstances, their policy is to remain hands-off and let the natural ecosystems regenerate on their own.

After a less catastrophic burn, park managers would expect to see some places that burned at a very high heat, places that burned at low intensity, and then other places that remained unburned. As might be expected, ceanothus, a type of bushy chaparral vegetation that can grow over 12 feet tall, has dominated the post-fire landscape. Ceanothus brush often swoop in immediately after a fire, providing important ecosystem services such as erosion control and nitrogen fixation. Typically, tree seedlings sprout amid the shrubs and eventually shade them out.

But that just wasn’t happening. The Cedar Fire has incinerated the forest down to its mineral soil, and the trees that would have otherwise produced cones for new trees were dead and gone.

“The fire didn’t leave patches of refugia that would have allowed the forest to propagate and grow again,” said Gonzales-Kramer.

After a few years of waiting it became clear that those the 400-acre slice of surviving forest was not going to be able to seed the regeneration of the entire park. The handful of California spotted owls that once inhabited the park had fled, and other birds – the red-breasted sapsucker and the golden-crowned kinglet – were diminished, too.

Active restoration appeared to be the most viable option for restoring portions of the 10,000 acres of forest that once existed within Cuyamaca. But that cost money that the Park initially didn’t have – an estimated $10 million. Because the restoration project would have significant climate benefits, State Parks was able to pursue carbon finance, creating the first U.S. forest carbon project on public lands. 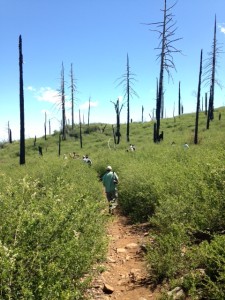 The private sector “funding partners” of the project all came in from different sectors: Disney voluntarily gave $2.9 million to the effort as part of its forest and climate commitments. American Forests and ConocoPhillips funded $2.8 million, as part of the oil giant’s 2007 settlement with the state of California. Grocery chain Stater Bros. Markets teamed up with Coca-Cola Bottling Company of Southern California on a campaign that engaged customers around planting trees and raised more than $260,000 for the restoration effort in the spring of 2008. Most recently, in 2012, Poseidon Water agreed to put up $1 million for tree-planting in Cuyamaca to compensate for emissions from an energy-intensive water project. And over $1 million more was raised from sources such as the Arbor Day Foundation and the California-based fruit juice company Odwalla.

Gonzales-Kramer is clear about the fact that carbon sequestration was not the motivation behind the Park’s tree-planting efforts, but it was carbon finance that made the restoration possible. She said the companies behind the project are interested in it because of its many co-benefits, including habitat creation, watershed protection, and recreation opportunities for the several thousand visitors that hike, camp, and picnic in Cuyamaca every year.

“It’s not about buying the cheapest carbon credit, because that’s not this project,” she said.

Starting from scorched earth, the Park’s restoration plan is ambitious: They aim to plant more than one million seedlings across approximately 10% of the park, only in areas where forests previously grew. Park staff have identified 5,664 acres for potential planting, about half of which will actually be planted. Of that area, about 1,600 acres will require significant site preparation, including cutting back the overgrown ceanothus with mastication machines. In areas designated as wilderness, which account for about half of the park’s land area, crews must remove the shrubs manually.

Next, workers must prep the site for prescribed burns by cutting down any standing dead trees and creating fire breaks at least 150 feet wide. When conditions aren’t right for prescribed burns, they haul out debris by the truckload and drive them down the mountain. The drought in California, which has now dragged on for five years, makes this more expensive option more likely.

“It’s very, very difficult to do [prescribed] burns during droughts,” said Gonzales-Kramer. “We have to be extremely conservative in your site prep, which makes costs go up.”

Since 2008, the Park and its partners, including CAL FIRE, have replanted over 1,400 acres. Over the years, they’ve tweaked their restoration efforts through a bit of trial and error. For example, managers found that “bare-root” seedlings tended to have a better fighting chance than those that arrived in containers. On the other hand, mulch mats meant to suppress competing growth and shade cards meant to limit evapotranspiration both worked well.

“Any restoration project is both an art and a science,” said Gonzales-Kramer. “You make your analyses, and then you go for it.”

In order to determine the amount of carbon sequestered through the restoration efforts, the project must first establish a carbon baseline. In Cuyamaca’s case, this includes looking at four types of carbon on the landscape: live trees that amass carbon as they grow; brush/shrubs that also store carbon (but less); lying dead trees that will soon decompose (releasing carbon dioxide); and standing dead trees that also will eventually topple and decompose. Carbon counters look at different plots within the park against a photo series to determine which biomass equations to use for an initial calculation. They then randomly select tenth-of-an-acre plots, where they take measurements on the ground.

The result is a baseline measurement of the carbon on the landscape in the “without-project” scenario. Project managers (and the investing partners) are betting that the “with project” scenario – the reforestation effort – will eventually store more carbon. But finding out for sure is a waiting game. New carbon measurements cannot be taken until the trees are at least five inches in diameter at breast height. Because of this, the Cuyamaca project has yet to issue a single offset since first listing with the Climate Action Reserve in 2009. With a crediting period of 100 years, the success of the restoration effort will be measured on the timescale of centuries.

The companies involved in the project offered the money upfront and expect a percentage of the offsets verified through the project over the next century. The contracts don’t include a specific number of tonnes. This flexible, patient finance for yet-to-be-issued offsets is rare in today’s voluntary carbon market, where the majority of tonnes are now transacted on the spot.

However, a 2012 third-party auditor verified the project’s activities offers some indication of the project’s potential climate impact: Environmental Services Inc. estimated that restored areas could potentially sequester 1.2 tCO2e per acre annually. This is three times the estimated sequestration of even the thickest possible brush cover on the landscape, the baseline scenario. Extrapolated out over the more than 2,500 acres targeted for planting, the restoration efforts could result in more than 300,000 tCO2e over 100 years. The Cuyamaca project is expecting to issue its first carbon offsets in a couple of years.

In the meantime, Gonzales-Kramer takes pride in the successes she can see, like the bald eagle that has reestablished itself on South Peak. She takes us bushwhacking through the stumps of chaparral to see a pocket of pines planted a few years ago. Her enthusiasm is contagious. We rally around one tree to take a picture.