Bringing clean cookstoves to Honduras, a country where more than half of rural households struggle with extreme poverty, was no easy task. Proyecto Mirador’s founders initially relied on the generosity of friends and family to build the cookstoves program, but tapped into the carbon markets to take it to the next level. 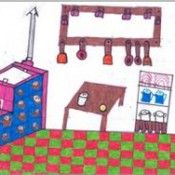 When Hurricane Mitch blew through Central America in 1998, the result was catastrophic. The second deadliest Atlantic hurricane in history claimed 11,000 lives and caused an estimated $6 billion in damage.

Honduras, a poor country with even poorer infrastructure, did not fare well. Humanitarian aid groups flocked to the region, including medical mission volunteers Richard Lawrence and his daughter Skye. The medical mission headed towards Atima, a town in the mountainous coffee growing-region of the country surrounded by countless rural villages.

Richard Lawrence, Executive Chairman of Overlook Investments and future Founder of Proyecto Mirador, acted as a translator for doctors on the trip. Standing in the midst of the crush of people who waited to see the doctors in a primary school temporarily converted to a medical clinic, he was struck by the number of children lined up against one wall of the schoolroom breathing with nebulizers.

“I’m not a doctor, and I thought, the air seems really clean so it beats me what it’s about, he said.

Skye stumbled upon the explanation by chance, when she visited one of the local children’s homes. The inside of the house was black and filled with smoke from the cooking stove. The stove was constructed of adobe mud, with an oil drum for a cooktop and a wide stove mouth stuffed with logs. There was no chimney, so the smoke curled around the room and turned the ceiling black.

School children participated in a contest to name the Mirador stove. Reina Mejia called it Dos por Tres because it is Honduran slang for an in an instant–and she felt that the stove cooked fast, quickly used less wood, quickly got smoke out of the house.

After research some improved stoves, the family raised money from friends to build 29 stoves designed by Aprovecho Research Center, a US-based stove research organization. An investor by trade, Lawrence couldn’t help making some quick calculations. With improved stoves using half the wood, how long would it take families to earn the rate of return on investment? The answer: in a few short months. People will line up to improve their stoves, he thought.

Thus, Proyecto Mirador was born. But despite the fact that the stoves were popular with users, turning it into a sustainable enterprise wasn’t as easy as those calculations.

For one, selling the stoves outright was out of the question. In rural Honduras, poverty affects almost two-thirds of the population, and more than half of rural households struggle with extreme poverty, living off of $1.25 a day. Proyecto Mirador targets these villages in Honduras.

While a few families could afford the stoves, the majority couldn’t or wouldn’t purchase one even if the families might recover their costs within two months. Even with available money, men control the purse strings. Since most work outside, fewer health impacts from cookstove smoke and didn’t see the necessity of spending money on cleaner stoves.

Instead, Lawrence’s family and friends financed the early installations. Co-director Do Emilia Mendoza, the wife of a Honduran Episcopal minister and cook for the mission trips, kept costs down by running the enterprise out of her house. Metal sheets and clay parts littered her backyard, and she drove the materials to homes in a pickup truck.

The Lawrences decided early on against relying on donors (or friends) for future funding. They wanted a steady source of financing and – at the time – carbon offsets provided that.

“We’ve been fortunate to have success with carbon, Lawrence said, referring to the more than 430,000 metric tons of carbon dioxide offsets sold. “But it’s harder than it should be… I’ve got two people who spend 24-7 reaching out to corporations to try and convince them to offset.

Carbon offsets finance 75% of the stove costs, with families contributing the rest in the form of cement, sand, bricks, adobe and labor. The latter is part of Mirador’s philosophy that stoves are not gifts and that families must “have skin in the game or “No Cuesta, No Cuida (no cost no care). Mirador uses the income from the sale of offsets to provide the plancha cooktop, firebox and chimney; technicians to build the stove; and supervisors who make three regular follow up visits to ensure the proper stove use and maintenance.

Revving up the impact

If the beginning of Proyecto Mirador seems a bit homespun, the result is anything but. The organization has scaled up from building 250 stoves in a year to nearly 125 a day now. With more than 80,000 stoves disseminated in the last five years, the organization has become the largest in Latin America.

While selling the carbon offsets remains an unpleasant task, verifying the offsets has only gotten easier. Though the process takes at least nine months of documentation, reports and technical review, the actual site visit only takes four or five days. The main reason for this quick turnaround is technology.

Around 2010, the stoves were really taking off. Community solicitations, requiring at least 10 families to sign on from a single village, poured in and started the beginnings of the now 2-year backlog of requests. Copycat chimneys started appearing on houses Proyecto Mirador hadn’t visited, making it difficult to follow up with customers. Carbon finance couldn’t cover the costs, so the organization once again turned to foundations.

Using the donations, they hired a consulting firm to build a platform and implemented the first use of Salesforce.com, a well-known customer relationship management product, in Latin America. It took a year for the program to be implemented and an additional three months to train the staff. Donations were used to equip all stove builders and field supervisors with GPS and reporting system to upload information online.

Entrepreneur teams, called Ejecutores, and Proyecto Mirador staff use smartphones to record and upload data while in the field. Salesforce and GPS points are stored in the cloud, allowing staff to monitor installations and material needs or to provide interactive imagery of stove locations in real time.

“It’s really something,” Lawrence said. “All the employees at the office have been trained and know Salesforce. We built a special holder for the phones on the front of each motorcycle, so when supervisors make home visits, they can identify exactly where the houses are that have our stoves.

Though initially made to keep track of stoves by staff on the ground, the investment also paid off for remote staff. “We use it as much in California as they use it in Honduras, he said, referring to Proyecto Mirador USA, the non-profit side of the organization that manages Gold Standard certification, finds donors and helps with the business issues of Proyecto Mirador, Honduras.

Now, Proyecto Mirador supports 17 full-time businesses: six Ejecutore construction companies, nine suppliers and two consultants. Outsourcing has allowed the organization to go from 250 stoves in a year to a predicted 29,000 stoves this year. However, Proyecto Mirador is still dealing with a backlog of stove requests. These households may have to wait a little longer for their stoves.

“The idea is that we would rather grow in a very measured way than grow exponentially and have troubles and have to stop, he said.

However, health remains at the heart of the organization’s work. Mirador surveyed stove recipients and almost all 99% – reported cleaner indoor air and improved respiratory health after switching. One grandmother, Maria Claudina Diaz Vargas, said: “my granddaughter suffers from a chest ailment and today without smoke she has improved.

Kelley Hamrick is an Associate in Ecosystem Marketplace’s Carbon Program. She can be reached at khamrick@ecosystemarketplace.com.

Everyone uses stoves to cook food, but not everyone risks respiratory illness Ã¢â‚¬â€œ or even death Ã¢â‚¬â€œ by using them. For almost three billion people in the world, open fires and rudimentary stoves are the norm. There is a growing solution, championed by development agencies, entrepreneurs and private companies: Ã¢â‚¬Å“improvedÃ¢â‚¬Â cookstoves and fuels.

Yet getting those models on the ground isnÃ¢â‚¬â„¢t as simple as swapping them for the older, dangerous stoves. Even with good marketing and distribution networks, projects often run into a key barrier. Most of their customers the poorest of the poor  can’t afford the new stoves. That’s where carbon finance can step in.

Part Four: Building Carbon Markets from Soot We examine the Nepalese governmen’s initiative to ensure clean cooking for all by 2017 through the lens of a Dutch partner non-profit SNV. The organization is trying to build up a private market for stoves, but first uses carbon finance to lower costs for people used to receiving stoves for free.