The giant panda featured in the World Wide Fund for Nature’s (WWF) logo gives the organization enduring brand recognition. But these animals are struggling to exist, with only 1,600 currently living in the wild in China, in increasingly smaller swathes of territory thanks to encroaching human activity. 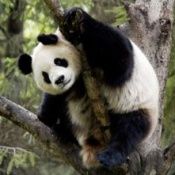 14 November 2014 | This fall, baby panda Bao Bao the pride of Washington, DC’s National Zoo turned one year old. The event was marked with speeches by the National Zoo Director and the Chinese Ambassador to the US, both of whom referred to her as an ambassador for endangered species and for all of China.

Even her name, meaning “precious or “treasure in Chinese, is rooted in the race for her species’ survival. Bao Bao represents one of fewer than 2,000 giant pandas living today.

In China’s Sichuan Province, conservationists are working to save her cousins in the wild, but they can’t use high-quality foods or climate-controlled settings to ensure ideal panda conditions. Instead, the major part of their effort is focused on minimizing or avoiding negative impacts.

For the pandas living near the Mamize Nature Reserve, the biggest threat is habitat loss from deforestation. But just as the threat stems from humans, so can the solution: in the form of improved cooking stoves.

People living in or near panda habitats often rely on firewood for cooking and heating. In southern Sichuan Province, residents use on average 30 tons of firewood each year for their traditional, inefficient stoves. The traditional mud or stone stoves feature poor thermal efficiency and conspicuous bellows of smoke, meaning locals will spend up to three months out of every year collecting firewood and run constant risk of respiratory illness while cooking.

The current giant panda habitat is in three provinces in China: Gansu, Shaanxi, and Sichuan.
©Map by WWF

With the panda habitat increasingly threatened, WWF joined with South Pole Carbon and the Mamize Nature Reserve to develop the Firewood Saving Cookstove project. The new and improved stoves feature chimneys and efficient internal air circulation that reduces carbon dioxide emissions and maximizes efficiency, saving an estimated 50-70% in firewood use.

For WWF, the location seemed intuitive, as the Mamize Nature Reserve in Sichuan Province sits at the southern-most edge of giant panda habitat and, as of the last panda census, is home to four wild pandas.

While the program made sense from a conservation perspective, WWF still had to convince local villagers who weren’t comfortable using the stoves initially to give them a chance.

Traditional stoves in the area have an open pit for the wood, meaning that locals could cut and place any-sized sticks into the fire. The new stoves aren’t as convenient. They sport a closed hatch, which is greater for energy efficiency, but requires villagers to chop the wood into smaller pieces that fit properly.

Warding off the Evil Spirits

For the first two years of the project, WWF worked with the local Mamize Nature Reserve staff to distribute 15 pilot stoves and with the Swiss-based South Pole Carbon as a technical advisor to ensure the project follows Gold Standard requirements for voluntary carbon projects.

The Mamize staff did most of the on-the-ground work. The staff regularly monitored progress and shared information with WWF, who visited the project site at least once a year. During one of these visits, WWF staff noted some of the chimneys were covered.

“I wondered why the chimneys were covered,”said Jiang Zeyin, Senior Programme Officer at WWF China. “We installed these chimneys to get rid of the fatal indoor air pollution. But people then put a cover on the chimneys so that the smoke can’t get out.”

The reason was completely unexpected: the villagers feared that evil spirits could enter the houses through the chimneys.

Together with the villagers, the Nature Reserve staff and WWF found an alternate way to keep the spirits out. By putting the iron chimney cap on small wooden sticks, the chimney is elevated a few centimeters, which allows smoke to get out of the house and repels the spirits trying to get in.

By the time the pilot had been adjusted to local needs, village recipients had started to spread the word about the improved stoves, which allowed project proponents to move to the next phase: scaling up.

Despite the project’s continual improvements, the biggest impediment to adoption remains financing. The stoves used by the project cost an average $200-300; due not to the tiles, chimney, or other materials, but because skilled labor is needed to install the stoves on location. Also, both labor and materials need to be transported to the Mamize Nature Reserve, a costly 10-hour drive from the city of Chengdu, the capital of Sichuan Province. While villagers contribute by purchasing the pots that fit into the stoves worth about $20 carbon offsets cover the substantial remainder.

Most other WWF projects require additional funding beyond the income from the carbon offsets, but the Swiss grocery giant Coop stepped in to purchase the initial offsets as part of the company’s commitment to zero emissions. Coop offered something unheard of to most carbon project developers these days: upfront financing. That helped the Mamize project become the first WWF Switzerland voluntary carbon project fully paid for through carbon offsets.

“As carbon projects are results-based, you don’t obtain money first and then start building stoves, observed Bella Roscher of WWF Switzerland. It’s the other way around. In this case, Coop provides WWF with upfront funding for carbon offsets expected to be generated three years down the line.

The first Swiss company to set up its own carbon offsetting fund, with an annual 2 million Swiss francs available, Coop has extensively mapped out and reduced emissions throughout the supply chain. Activities that can’t be reduced any further such as business travel or the air transportation of food are then offset through the fund.

The company’s stringent reduction efforts led to the WWF-Coop partnership in the first place. A company has to avoid and reduce emissions to the greatest extent possible before offsetting its remaining emissions through a WWF project certified by the Gold Standard, Roscher explained. Coop fit those standards.

“They’ve really done their homework, she said. “Their internal monitoring system in place is extraordinary.

However, while the company worked with WWF on the Mamize project, it wants to focus on supporting activities that directly relate to its supply chain. Thus, Coop purchased offsets generated from the initial 1,600 stoves distributed in Mamize, but does not want to pursue an expansion.

Roscher understands Coop’s reasoning, and is now looking for other buyers.

“The challenge we are facing right now is we plan to expand the project from 1,600 stoves to 2,800 stoves, and need to look for funding elsewhere, she says, adding that one option might be finding a buyer who is interested in other project benefits besides carbon. After all, WWF created the project to save pandas; reducing carbon was a byproduct. The Mamize project also reduces indoor air pollution, thus improving health, and it saves up to three months of time for collecting firewood, which enhancing livelihoods, and saves 225 hectares of forest a year.

Roscher will submit project proposals to potential funders currently not active on the carbon market. “The fact the project is externally verified by the Gold Standard gives it credibility, she said “It makes the project strong, regardless of whether carbon credits are generated.

The case for co-benefits was made more compelling by a Gold Standard Foundation study, The Real Value of Robust Climate Action: Impact Investment far Greater than Previously Understood, released earlier this year. The report featured the Mamize project alongside four other case studies. Calculating the project’s biodiversity and economic benefits resulted in an estimated $1.43 million per year more than three times the project’s total costs. These detailed amounts might entice companies interested in making a difference in issues besides carbon.

And saving a panda habitat is a very strong attraction. Bao Bao could use some panda playmates to share her frozen apple juice birthday cake with.

Part Four: Building Carbon Markets from Soot We examine the Nepalese government’s initiative to ensure clean cooking for all by 2017 through the lens of a Dutch partner non-profit SNV. The organization is trying to build up a private market for stoves, but first uses carbon finance to lower costs for people used to receiving stoves for free.