When Elon Musk started Tesla Motors in 2003, he didn’t aim to end our car culture – just to make it cleaner. Likewise, pescatarian businessman Michael Mathres doesn’t aim to end our global love of beef and milk – but with a new product called “Mootral” he does want to reduce their impact on climate change by cleaning up cow burps. 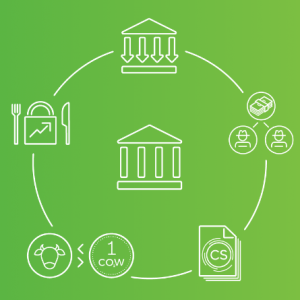 That’s six billion bloated bags of good and bad bacteria, some of which aids digestion but some of which steals the cows’ half-chewed grass and corn and emits massive amounts of methane, a powerful greenhouse gas that captures about 80 times more heat in a 20-year period than carbon dioxide does.

Put another way: one liter of methane accelerates climate change as much as 80 liters of carbon dioxide does, at least in the short term (more on this later), and cows burp it out continuously, to the tune of more than 150 liters per day. That means a corn-munching cow does more damage to the environment than a gas-guzzling car does, which is one reason Swiss environmental entrepreneur Michael Mathres became a pescatarian – meaning he eats fish but not meat.

But he knows the world isn’t going to make that same shift, at least not instantly.

“The livestock industry in a lot of countries is a big part of…their economy…their culture, and their society,” he says. “Cows will continue to be here on earth, and we have a solution to make the cow happier and healthier – while also helping the farmers reduce emissions and make more money.”

The solution he offers is Mootral (like “neutral” but with a “moo” instead of a “neu”), and it has at least one competitor, called 3-nitrooxypropanol. Both work by killing some of the methane-emitting bacteria in a cow’s gut but leaving the digestion-helping bacteria intact.

The result, says Mathres, is a healthier cow that produces better milk and more meat but with 30 percent less methane. The product has been tested in Europe and is now being piloted in other countries, including the United States.

Once commercialized, he estimates Mootral will cost $50 per cow per year – eminently affordable in the developed world, but a whole month’s income in many developing countries, where beef and milk consumption are increasing rapidly.

To spread the product worldwide, Mathres, is exploring the use of carbon offsets and other creative financing mechanisms – but these efforts could falter if current methods of accounting for methane’s climate impact aren’t improved.

To standardize things, policymakers came up with something called “CO2e”, which stands for “Carbon Dioxide Equivalent” and acts as a standardized measurement of greenhouse gases based on their “warming potential”. CO2e is derived by determining how many times worse a given greenhouse gas compared with carbon dioxide over the next century and using that as a multiplier.

For example: because methane is 25 times worse than carbon dioxide over 100 years, its multiplier is 25.

But is 100 years the right time frame?

More and more scientists say “no”, because the next 20 years are critical for reeling in the climate mess, and Carbon Brief estimates we have less than 20 years to keep temperatures from rising 2 degrees Celsius – the point after which climate models start to go haywire.

“So it makes no sense to talk about a gas that lasts 100 years when we only have 16 years to fix things,” says Mathres, who nonetheless uses the 100-year benchmark when describing his product’s advantages.

If policymakers adjust CO2e to reflect methane’s true impact, or if farmers and consumers simply do so on their own, then products like Mootral and 3-nitrooxypropanol  (also called “3NOP”) could become as lucrative as they are beneficial.

Both products work by killing or stifling the “bad” bacteria that compete with cows for food by lingering in their guts – as well as those of other four-stomached animals like sheep and goats (all called ruminants).

Not only do the bacteria steal the cow’s food, but they emit the methane that cows burp out throughout the day (contrary to popular belief, about 90 percent of a cow’s methane comes out of its mouth, with only 10 percent coming from the rear ends, not including manure, which is another story).

By eliminating that bacteria, both Mootral and 3NOP appear to increase productivity.

“[Mootral] actually helps the cow digest by killing the bad bacterial,” says Mathres. “When it does that, [the cow] actually has more energy to spend on producing what it needs to produce…so you get premier milk, with more fatty acids and protein.”

That, he says, is a big part of their pitch to farmers in the developed world – but what about poor farmers who can’t afford the feed to begin with?

How to Pay for It?

“Our ideal scenario is that Mootral will just be a really, really nice food supplement that the farmers will be able to purchase [to produce] more meat and more milk,” says Mathres. “But we’re also exploring the use of innovative financing mechanisms to get off the ground – especially in developing countries.”

Among those mechanisms: bilateral trade programs that let wealthy importing countries subsidize the production of carbon-neutral beef in poorer exporting countries, or the use of carbon offsets that people and companies to reduce their own carbon footprints by subsidizing the distribution of Mootral in developing countries.

The most recent Ecosystem Marketplace/Forest Trends “State of the Voluntary Carbon Markets” report does track a small amount of offsetting related to livestock methane, but most of the methane transactions are related to “landfill methane“, where companies earn carbon offsets by capturing methane from landfills, which are kind of like giant, man-made cow stomachs. The report tracks 4.6 million tons of CO2e from landfill methane projects in 2016, but that’s not 4.6 million tons of methane. Instead, it’s 4.6 million divided by 25, or 184,000 tons. If the multiplier were 80 instead of 25, that would represent 14.7 million tons – a figure much closer to the scientific reality over the next 20 years. By the same token, a more scientifically accurate multiplier could unleash more funding for livestock methane in the next few years.

The American Carbon Registry is in the process of approving a new methodology for using carbon offsets to pay for feedstocks that reduce emissions, and Mathres is developing a “cowfunding” platform to let consumers buy “cow credits” from individual farms that use Mootral. To generate offsets, however, a farmer would need to prove that the cost of feedstock is above and beyond “business as usual”, and that the benefits of adding the mixture to the feed probably won’t pay for itself. In the past, offsets have played a similar role to government subsidies, essentially supporting new and untested technologies in the early stage, when direct economic payoffs were unclear or unachievable.

“These could be carbon offsets if the economics works that way, or they could be bonus payments to farmers who do the right thing,” he says.

He’s also exploring the creation of “climate-smart beef and milk” standards, which could encourage companies like Marks & Spencer or Whole Foods to fund the product’s use by paying a premium for Mootral-fed cattle products.

This article is adapted in part from episode 15 of the Bionic Planet podcast, which we produced at the Innovate4Climate Summit in Barcelona. It features an in-depth, annotated interview with Michael Mathres. Bionic Planet is available at Bionic-Planet.com, as well as on iTunes, TuneIn, Stitcher, and pretty much anywhere you access podcasts. You can also listen on this device here:

We talk of a “carbon footprint”, but there are actually six major greenhouse gasses, and each is a little different.