The forests, farms, and fields of the United States mop up a staggering 15 percent of the country’s industrial greenhouse-gas emissions, but this capacity will plunge as the climate changes. That’s why every credible climate solution incorporates nature-based solutions and climate-smart agriculture, but major media still aren’t covering it. Would that change if we called them “sky farming”? 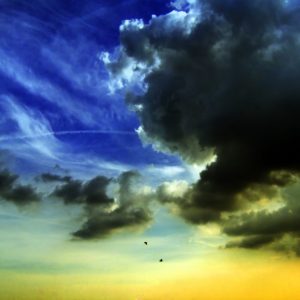 25 February 2019 | Quick question: what does US Sen. Dianne Feinstein’s (D-CA) draft resolution on climate change have in common with the Green New Deal?

Answer: they both advocate sky farming.

More specifically, they both use the country’s forests, farms, and fields to mop up greenhouse gasses that we’ve pumped into the air.

More technically, they both aim to help farmers and other land managers expand the massive carbon sink that already mops up 15 percent of our industrial emissions.

More economically, this boosts the rural economy and helps our food systems adapt to climate change.

Carbon dioxide is the most common one and accounts for about 81 percent of the greenhouse gasses in the United States. Most of it comes from fossil fuels, but it also comes from chopping forests and burning trees. Roughly half the dry biomass of tree is carbon, which mixes with oxygen to form carbon dioxide. In fact, one ton of carbon makes 3.67 tons of carbon dioxide. That means there’s more CO2 in a tree than there is tree in a tree.

Methane is next, and accounts for about 10 percent of US greenhouse gasses, but it captures about 80 times more heat in a 20-year period than carbon dioxide does, but then breaks down into CO2. Over 100 years, it captures about 25-times as much heat as CO2 does, and it comes from decaying plants and cow burps.

Nitrous oxide is next. It accounts for just 6 percent of US emissions, but traps 300 times as much heat. It’s also the greenhouse gas most related to sky farming, for two reasons. First, because farmers release it whenever they dig up soil to plant crops, and second because they sprinkle on the ground when soil goes bad, albeit blended with hydrogen, in the form of ammonia. Plants mop this stuff up, which is good, but if you give them too much, they die, and too much activated nitrogen also depletes the soil and mixes with oxygen to form nitrous oxide.

The story continues below, but you can learn more about sky farming on Episode 39 of the Bionic Planet podcast, although I don’t actually use the term.

You can access Bionic Planet on all major podcatchers, including RadioPublic, iTunes, Stitcher, and on this device here:

How Does it Work?

Critics have slammed the the New Green Deal for aiming to eliminate all greenhouse gas emissions in ten years, but that’s not what the Deal describes.

Instead, it aims for “net-zero” emissions, which means they’re aiming to cut cut industrial emissions as deeply as possible while using our living ecosystems to absorb the rest.

I call it sky farming, but the technical term is “climate smart agriculture” (CSA), which covers a slew of time-tested but long-neglected practices like planting cover crops and trees to pull nitrogen and carbon from the sky and infusing them into the earth. Why? Because in the sky, they blend with oxygen to become greenhouse gasses, but in the earth they improve soil fertility, which helps farmers wean themselves off of petrochemical fertilizers.  “Sky farming” also contrasts so sharply with the current practice of digging long-dead fossils up out of the earth and spreading them on the ground or pumping them into the air.

Millions of farmers in the developing world, like Prisca Mayende of Kenya, have switched to sky farming, and it’s catching on in the United States, too.

One sky farming tool is switch grass, which revives dead soil and produces extra biomass that some farmers want to use for bioethanol – a prospect that scares the hell out of fossil-fuel companies, but also gives environmentalists pause. Done badly, bioethanol expansion could increase emissions as people chop forests to make the stuff, but many farmers insist they can dramatically increase bioethanol production while restoring land and reducing emissions. The authors of the two contrasting proposals have clearly done their homework, and they’ve created fodder for healthy debate on an issue that we should all be focusing more on.

Feinstein’s proposal, for example, explicitly calls for “bio-energy power generation with carbon capture and sequestration” (BACCS), which pairs bioethanol production with “negative-emissions technologies” (NET) that capture carbon dioxide as the fuels are combusted, before they escape into the atmosphere. After that, the CO2 can be pumped into greenhouses, where it helps plants grow, or distilled into pure carbon and pure oxygen. The carbon can then be infused into rocks or fed into 3D printers – “sky mining”, anyone?

The authors of the New Green Deal intentionally avoid the issue of BACCS, and experts caution that BACCS is next-generation stuff at best; but climate-smart agriculture and sustainable forest management – two forms of sky-farming – are here right now, and both proposals clearly embrace it.

This is critical, because a landmark 2017 study showed that we can get  37 percent of the way to meeting the Paris Agreement’s 2-degree Celsius target just by scaling up 20 natural climate solutions that are already being practiced around the world, while last year’s Intergovernmental Panel on Climate Change (IPCC) report concluded that we must scale these practices up if we’re to meet the more ambitious 1.5-degree target.

“Most farmers are living on small margins,” says Wil Burns, Co-Director & Professor of Research at American University’s Institute for Carbon Removal. “They live and die by the profit from each individual crop, and they can’t afford failure. That makes it very difficult for them to embrace no-till agriculture or cover crops or agroforestry or anything that’s going to disrupt their model.”

Beyond farms, there’s huge uncertainty over the state of US forests, which currently act as a net “carbon sink” that absorbs about 15 percent of the country’s industrial emissions. That capacity will plunge as the climate changes – unless we nurture the forests better.

Both proposals aim to help help landowners do just that, but real policy requires knowing which activities will generate the best results – and what those results will be.

“The estimates are all over the place,” says Burns. “Some say forests can sequester just half a gigaton of carbon dioxide annually, while others go up to 10 or 12 gigatons.”

Despite that uncertainty, it’s clear that doing nothing isn’t an option, which is why forests, farms, and the rural economy feature so heavily in the both proposals.

But don’t take my word for it. Crack them open and see for yourself.