The European Commission has set some of the most ambitions environmental targets on the planet, but states have struggled to achieve them. Fortunately, the Commission and member states have also created an impressive set of mechanisms for getting users and polluters to pay for restoration. Now they just have to teach people to use them. 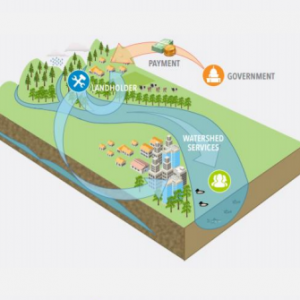 17 July 2017 |The French communes of Contrexéville and Vittel are known for their healing waters and health spas, and today they enjoy some of the purest water in all of Europe, but that wasn’t always the case. Up until 1992, farms and light industry were dribbling pesticide, dung, and crude oil into rivers and streams, and had been doing so for decades.

But then the communities undertook a massive environmental overhaul: farmers started getting rid of their cows and weaning themselves off of pesticides by rotating their crops in ways that didn’t give bugs a chance. Home-owners and businesses started digging up their oil tanks and replacing them with natural gas installations. Today, more than 90 percent of the land in both communes is under some sort of environmental protection.

But this overhaul wasn’t led by environmental regulators; it was led by a private company with a very clear incentive.

The company was Swiss food giant Nestlé, and its incentive was the fact that its lucrative Vittel, Contrex and Hépar mineral waters were only lucrative because they’re certified as “natural”. To keep that certification, they had to clean up the rivers that feed the aquifer that in turn feeds the springs that the waters gurgle up from.

The stakes were high enough – and the incentive strong enough – that Nestlé created a separate consultancy called Agrivair and spent more than €24.5 million throughout the 1990s “to design a system to either compensate farmers for their change in practice, or acquire the land and lease it for free under conditions targeting groundwater protection,” according to a new report called “State of European Markets 2017: Watershed Investments”.

The report is one of three market outlooks that the Forest Trends initiative Ecosystem Marketplace created to support a cluster of new online university courses launched by green businesses accelerator ECOSTAR to help organic farmers, watershed managers and other “green entrepreneurs” better understand the business elements of their respective missions. The ecosystem services e-learning course will run from October to December, and the application deadline is September, 30th. You can learn more at ecostarhub.com/e-learning-course.

The Agrivair project still pays farmers an average of €200 per hectare to keep things green, and it’s one of more than a dozen “payments for ecosystem services” (PES) programs highlighted in the three reports. Lead author Genevieve Bennett, a Senior Associate at Ecosystem Marketplace, says the project illustrates the ability of companies to provide resources when properly incentivized. She adds, however, that private and public interests rarely line up so neatly, and that such projects work best within a well-structured regulatory environment.

“You don’t really want a private company taking a lead on decisions about water resources management in your basin,” she says in an extensive, 45-minute interview that will run on episode 19 of the Bionic Planet podcast, which is set to be posted on Monday, 17 July. “That’s a public issue…but where there is a seat for the private sector at the table is contributing resources: if you’re a beverage company and you’re concerned about clean water and you want to kick in some funding to help pay for that…that’s a positive thing.”

The three reports aim to identify the mechanisms that already exist, track the money flowing through them, and help people better understand their workings. They are built on interviews with scores of policymakers, entrepreneurs, and academics across Europe, and they explore existing financing mechanisms for reducing greenhouse gasses, conserving biodiversity, and managing water. Although designed to support the curriculum developed by ECOSTAR, they are designed to be accessible to a larger audience as well, and we’ll be harvesting the findings for future articles on Ecosystem Marketplace.

Each report opens with an introduction that states the challenges in the respective environmental areas, then segues into a simple introduction to mechanisms that can be used to drive finance towards meeting those challenges, followed by an overview of specific European Union directives that drive the mechanisms’ use in Europe, then detailed findings on how individual countries are using those mechanisms, and finally and deep dives into specific case studies. Where possible, they also track financing flows – and this yields interesting findings.

The water report, for example, opens with a clear overview of three basic mechanisms for tapping private finance to support water management (see “Figure One: Mechanisms Tracked in This Report”, below). Then it examines drivers like the European Union’s Water Framework Directive (WFD) and individual state laws and programs, and finally it examines individual projects like Nestlé’s. 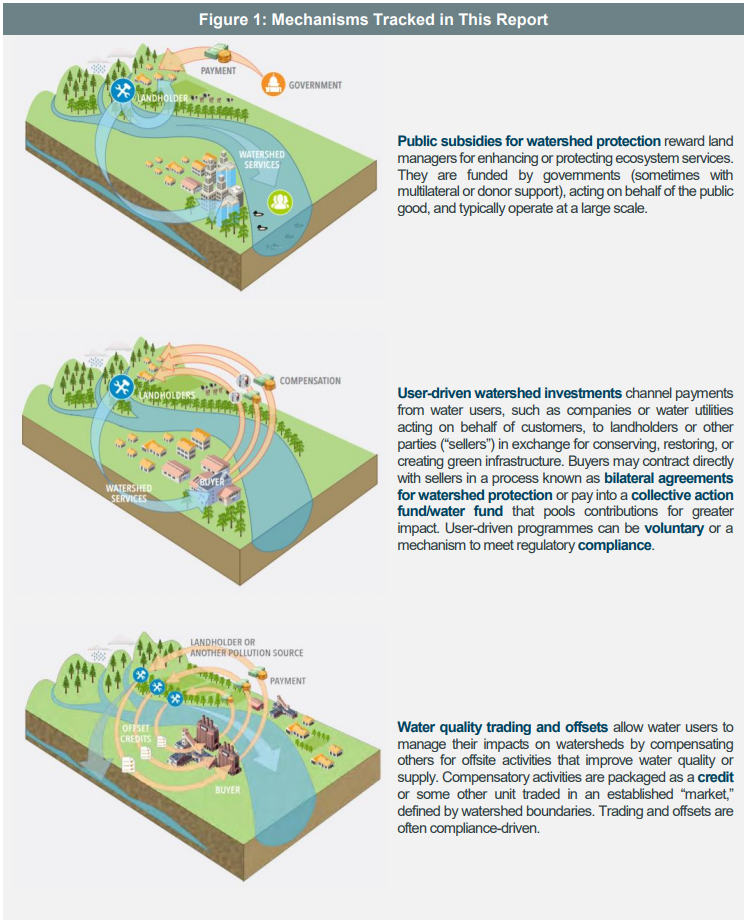 Where is the Private-Sector Finance?

Although built on the same principles as similar programs in the United States, the European initiatives aren’t yet drawing significant amounts of finance from polluters and users – perhaps because most European projects are “one-off” initiatives executed quietly, while the US “restoration economy” relies on third-party companies that restore degraded land and that compete in an open, regulated market. The water report, for example, tracks $5.7 billion flowing into water conservation programs, but only $13.4 million of that was coming from users. That means 99 percent of the money was still coming from general public coffers, and not from the companies or individuals that benefit from clean water.

“I think that in Europe, we will start to see more and more water users themselves trying to initiate these programs,” says Bennett. “We have seen a little bit of a preview of that in the United Kingdom, where…there has been a huge growth in interest on water companies’ part to manage their catchments because the costs of addressing the issues that they’re dealing with on-site are just getting out of control.”

That preview came in part because WWF-UK and the Royal Society for the Protection of Birds sued the UK’s Department for Environment, Food & Rural Affairs (DEFRA) for non-compliance with the Water Framework Directive, according to Ecosystem Marketplace’s 2014 global overview of watershed investments. In response, the report says, DEFRA allocated $2 million to fund catchment partnerships, and 17 of the first 20 partnerships ended up developing payments for watershed services programs to promote sustainable management of the land.

“It will be interesting to see if that starts happening on a large scale in Europe as the Water Framework Directive continues to roll out,” she says. “It’s still in the early years, so it’s a little soon to say, but that basin-based approach is really interesting and exciting.”