The California Air Resources Board is moving to invalidate more than 230,000 ozone-depleting substances offsets generated at an Arkansas facility. Although the ARB invalidated a relatively small fraction of the 4.3 million ODS offsets being investigated, one of the project developers believes the regulators’ interpretation of the rules to be incorrect and will seek a reversal before a final decision is made. 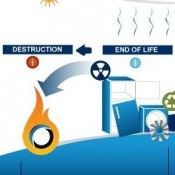 The California Air Resources Board (ARB) the agency tasked with overseeing the state’s cap-and-trade program and its offset composition in May began reviewing offsets issued for ozone depleting substances (ODS) destruction events at the Clean Harbors Incineration Facility in El Dorado, Arkansas. These substances, which include foam blowing agents and refrigerants, are much more potent than carbon dioxide in terms of their global warming potential, so the ARB has adopted a process to count the greenhouse gas emissions reductions associated with destroying these materials in the United States and allow these reductions to be used for compliance in its program.

California’s cap-and-trade regulations include so-called buyers liability provisions that allow the regulators to invalidate offsets found to be faulty or fraudulent and require regulated entities to surrender replacement offsets for compliance. These controversial rules are often blamed for a lack of liquidity in the California offset market.

In a preliminary decision, the ARB ruled that the offsets generated by two ODS projects one developed by Environmental Credit Corp (ECC) and the other by EOS Climate should be invalidated because the Arkansas facility was out of compliance with its operating permit issued under the Resource Conservation and Recovery Act (RCRA). Of the 231,154 offsets the ARB is seeking to invalidate, 142,199 were generated by ECC’s offset project and 88,955 from the EOS Climate project. However, the ARBÃ’s preliminary decision cleared the vast majority of the 4.3 million compliance offsets being investigated.

ECC declined to comment, but EOS Climate officials say the Clean Harbors facility has been destroying ODS in full compliance with RCRA, the Clean Air Act and Montreal Protocol requirements for more than 20 years.

“At no point has the facility been the subject of any enforcement action related to ODS destruction, the company said in a statement. “EOS Climate believes that ARB’s determination is based on an incorrect interpretation and characterization of a number of fundamental facts and of ARB’s own regulations and guidance.

EOS Climate plans to ask the ARB to reverse its preliminary ruling before a final decision is made on invalidation. The preliminary decision starts the clock on a 10-day public comment period, followed by a 30-day internal review at ARB although the regulators can issue a final decision anytime in or after that 30-day period.

Once a final determination is made, the offsets not subject to invalidation will be returned to account holders after being removed in May when the investigation commenced, while the other offsets are marked for permanent invalidation.

The 1976 RCRA legislation gave the US Environmental Protection Agency the authority to control hazardous waste from “cradle-to-graveincluding generation, transportation, treatment, storage and disposal and established a framework for the management of non-hazardous solid wastes. ARB’s Executive Officer determined that the Clean Harbors Facility was not operating in accordance with its RCRA permit on February 2-3, 2012, meaning that offsets generated by destruction events taking place on those dates were subject to invalidation.

“It goes to show that ARB is very serious about their intention to invalidate offsets, said Julian Richardson, CEO of Parhelion Underwriting, a specialty insurer focusing on the climate finance sector that has developed a policy to cover the invalidation risk. “This is important for the long-term good of the offset mechanism, which needs to be robust in terms of environmental integrity for it to be credible.

Both projects were initially registered with the Climate Action Reserve (CAR), a voluntary carbon standard, before migrating to the ARB’s compliance program under its early action provisions.

“We’re pleased that ARB has reached this milestone point in the investigation and that the conclusion of this investigation is near, said CAR President Gary Gero. “I don’t think we can assess the real impact on demand until the final determination is issued, and with the final determination, we’re looking forward to seeing clear guidance on how to implement these provisions, which would more fully assist project developers and other market participants. This is certainly a precedent setting determination for the program.