The Brazilian state of Rondônia is laying the groundwork for a system of ecosystem-service payments designed to funnel money from industrialized countries and Brazilian companies into forests. Environment Secretary Vilson de Salles Machado for his take discusses the role of REDD+ and indigenous people. 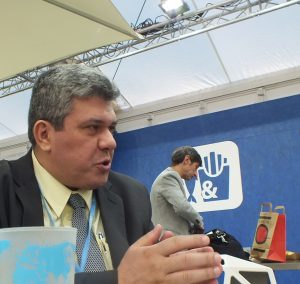 14 January 2015 | Like the state of Acre before it, the Brazilian state of Rondônia aims to develop a jurisdiction-wide system of economic incentives for good land stewardship based in part on payments for ecosystem services that funnel money from industry to programs that support natural water systems and forests – including those that reduce greenhouse gas emissions from deforestation and forest degradation (REDD).

The initiative is being spearheaded by Secretary of Environment Vilson de Salles Machado, whose office is in the process of selecting a partner to carry out the initial feasibility study. So far, four organizations have submitted bids. Three of them are NGOs – IDESAM, ECOPOREL, and RIO Teja – and one is an unnamed private company from the state of Curitiba.

We caught up to the Secretary at last month’s climate talks in Paris to get a feel for what this system could look like.

Ecosystem Marketplace (EM): Is this a “law”, in the sense that it has to go through the legislature, or is it something that the Ministry of Environment can implement on its own?

Vilson de Salles Machado (VdSM): The Secretariat of Environment could implement a regulatory regime tomorrow if we wanted to, but we don’t want to, because the goal is to create something that will continue long after this government leaves. So, we decided instead to initiate a legislative process, beginning with this technical study that will inform the law. Once the technical study is completed, lawmakers who support it will draft a bill. From there, it leaves the executive branch and moves to the legislative branch for further discussion and approval. Once that happens, the law returns to the executive branch of the government to be signed into law.

One of this government’s main interests is to create a solid law that will continue after we’re gone, to provide regulatory certainty for investors.

EM: Is it possible to compare and contrast this law with the one in Acre, or is it too early?

VdSM: Rondônia is interested in learning from the experiences of Acre, Mato Grosso and Pará, but at the same time we need to establish a law that makes sense for our own reality.

Acre’s reality, for example, is based on the extractivist economy – the rubber tappers, the indigenous communities, and then small family holders that live there – while Mato Grosso’s economy is built on agribusiness, and Rondônia is a mix of the two. So, while learning from other experiences is good, Rondônia needs to create a law that really takes into account what’s going on here.

EM: How do you see the finance working?

VdSM: The law was created to capture investment from REDD and climate finance in order to invest in the objectives of REDD+, such as investments in the extractivist economy or to support forest-based communities. It’s also meant for implementation of a true beneficiary program for the indigenous people of Rondônia, reforesting deforested parts of the state and investing in technology that will enable farmers to achieve zero-deforestation while increasing their yield and productivity without having to clear new forests. And this will only happen through a combination of technology and capacity-building for farmers.

We also seek to promote and improve “conservation units”, such as the state parks, which are in a serious state of decay, and to invest in technology that benefits agribusiness by, for example, improving farm productivity for operations larger than 100 hectares.

EM: Is there a possibility to implement pilot programs, like the one in the Igarapé Lourdes Indigenous Territory?

VdSM: All the projects that feed this framework will be considered. All this technical study is really to identify what is happening in Rondônia, and how all those good experiences can be nested in the future REDD law. For instance, in addition to indigenous pilot projects that are under development, we are engaging with private partners for investment in REDD. The lumber company Triangulo Manoa will receive a REDD certificate next year. They’ll be the first company in Rondônia to receive this certificate.

EM: REDD certificate? Is that an offset?

VdSM: Details are forthcoming, but basically, Manoa partnered with Rondonia on sustainable timber, and in June 2016 the company is going to receive a FSC (Forest Stewardship Council) stamp of sustainability, and the company is calling it a “REDD certificate”.

EM: Do you see room for REDD offsetting in the new system?

VdSM: The state has an interest in selling credits when the law is created because we have several “conservation units”, such as state parks, and we are really boosting our command-and-control policies, ensuring that the investment will be secure, that there will be permanence. Therefore, the state is interested in private investment and carbon credits. The reason policymakers want a law with a long life is to provide the regulatory certainty that  long-term investors need.

EM: What sort of activities is the state exploring to strengthen indigenous communities’ economies?

EM: At the opening day of the COP, Unilever and Marks & Spencer pledged to source their products in jurisdictions that achieved zero-deforestation, or at least are close to achieving that. They alluded to the idea that REDD finance could help bring these jurisdictions up to speed, maybe through programs like certification. Is this something in which REDD financing could be involved?

VdSM: Rondônia already had an agreement within the Secretariat of Environment to create a certificate tentatively called “Friends of the Environment”, although the name isn’t final. This certificate would be given to companies that meet basic criteria, such as engaging in sustainable production, respecting the environment, etc. The certificate would also cover companies that have truly abolished slave labor, which unfortunately is a reality in Rondônia. Any sustainable certification would cover – and aim to stifle – social- and human-rights abuses by corporations as well.

Policymakers are also collaborating with the Secretary of Labor to make sure companies that are receiving the certificate are respecting labor laws and protecting the environment in their business.

EM: How does membership in the GCF (Governor’s Climate and Forest Task Force) impact this procedure? What benefits does it bring?

VdSM: The reason Rondônia entered the GCF is to gain experience, to attract investment and to increase the visibility of the state in the world. One of the immediate and positive results of this participation is awareness that Rondônia does not have a REDD law. If it already had this law, it would be in a different negotiating position to participate in the GCF.

EM: What is Rondonia’s position in relation to the Surui Carbon Project, which is a landmark in indigenous REDD and has  been in place for five years now? Because, the project also met with a lot of criticism. Individuals from the Surui leadership have – with the support of the Catholic Indigenous Missionary Council (CIMI) – engaged in the sale of hardwood, contributing to deforestation, which has resulted in divisions within the Surui government system.

VdSM: I don’t understand why CIMI took the position it did, and Rondônia does not approve of those activities. It fully supports the Surui Carbon Project, and the governor of Rondônia has given his full support to the Surui project and Chief Almir.

In fact, this project is the post card of Rondônia regarding this issue. Almir Surui is well-regarded here. In a recent congressional meeting, he gave one of the best presentations acknowledging that the current state of deforestation is very serious, and they are working hard on policies to stop it, but the deforestation that occurs on indigenous lands in Brazil is under the jurisdiction of FUNAI and the police, but the Surui are also contributing with the environmental police, who are under Rondônia’s jurisdiction.

EM: Almir said earlier this year that he hasn’t received any support from the police inside the territory. Is that a state or a federal issue?

VdSM: I can’t say whether the environmental police are doing more than the federal police, but whenever possible they work in conjunction, and I know that when the Surui detected deforestation they would usually call the federal police first.

I’m aware that deforestation has increased in recent years in indigenous lands and they are suspicious that some indigenous peoples are involved in that deforestation. The problem in the context of increased deforestation is that there is a huge increase in the demands place upon the environmental police, and they don’t have the capacity to meet it. The environmental police have a partnership with the Secretary of Environment, but because of resource shortages, they only 30% of their capacity working.

The government of Rondônia is in the process of hiring 60 new fiscal agents for forest monitoring. That will free up additional funds and resources for the police. The law enforcement wants to increase surveillance and scale up protection over indigenous lands.