Brazil’s constitution guarantees indigenous control over indigenous lands, but critics of President Michel Temer say his administration is neglecting those provisions and intentionally sabotaging institutions charged with protecting indigenous rights. Next week, a massive meeting of indigenous peoples will convene to change that. 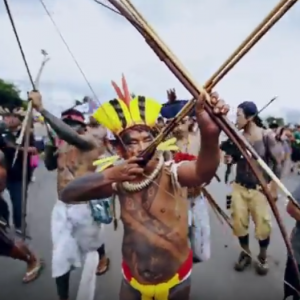 It was founded in 1910 as the Indian Protection Service (Serviço de Proteção ao Índio) by naturalist and explorer Candido Rondon – a man some have called the Teddy Roosevelt of Brazil because of his later drive to develop national parks (and who was, in fact, Roosevelt’s guide in his 1912 journey into the Amazon). Rondon had witnessed firsthand the atrocities against the country’s indigenous population, and he founded the agency under the motto “Die if you must, but never kill,” to both “civilize” isolated indigenous peoples and protect them from outsiders. At times enlightened and at other times corrupt, FUNAI is the only government agency explicitly charged with demarcating indigenous territories and enforcing indigenous rights,but its ability to do so has been dramatically curtailed under President Michel Temer and his agribusiness allies in the National Congress.

Legislative initiatives like PEC 215/00 seek to reduce existing rights, while the judicial system has increased delays in trials and critics say the Temer administration is intentionally hobbling FUNAI with unnecessary bureaucratic obstacles.

Against this backdrop, more than 1,500 indigenous leaders from across the Brazilian Amazon will convene next week in the Capital, Brasilia, for the five-day annual “Free Land Camp” (Acampamento Terra Livre, ATL).

It’s an annual meeting that began in 2004 and runs this year from April 24 to 28 under the motto “Unify the struggles in defense of the indigenous of Brazil. For the guarantee of the original rights of our people”.

Most activities are concentrated on Tuesday through Thursday, and will include marches, public acts, hearings with authorities of all three branches of government, debates, lectures, cultural activities and discussion groups. Organizers are encouraging input, and are urging outsiders to contact them at [email protected] or via their website.

The event is also being supported by the National Indigenous Mobilization and Unicult – University of Cultures – as well as environmental NGO IPAM, which is transporting indigenous leaders from remote corners of the Amazon and helping to develop technical material for workshops,