Climate negotiators are meeting in Bonn, Germany, the next two weeks to move the Paris Climate Agreement forward – even as Republicans in the United States seem intent on moving it backward. Most countries say they want the US to stay in the agreement, but there’s reason to believe it will be better off without us. 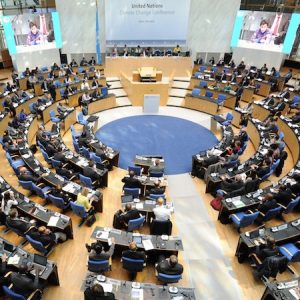 8 May 2017 | The dark-haired man looked haggard and world-weary as he leaned towards the microphone.

“We ask for your leadership,” he told US Undersecretary of State Paula Dobriansky, with cameras running and the world watching.

“We seek your leadership,” he continued. “But if for some reason you’re not willing to lead, leave it to the rest of us. Please, get out of the way!”

The year was 2007, and the young man was Kevin Conrad, who represents Papua New Guinea in UN climate talks. The place was Bali, Indonesia, where George W Bush’s US negotiating team had been gunking up talks with silly games and doublespeak. The words perfectly captured the exasperation in the room, and delegates roared in rare applause. Bush’s team backed down.

But ten years on, it’s déjà vu all over again, except this time the world isn’t haggling over how to fix the climate mess. Instead, negotiators are meeting in Bonn, Germany this week and next to begin implementing the bottom-up fix that the world has already agreed on – a fix the United States was instrumental in creating: namely, the Paris Climate Agreement, which is a flexible framework that gives every country the leeway to meet the climate challenge as it sees fit.

It does require the creation of science-based rules for measuring and monitoring emissions, and the world’s media should be focused on the substantive efforts to develop a detailed rulebook for handling international cooperation on emission-reductions. Instead, however, the Trump Show has stolen the spotlight, and media is preoccupied with the question of whether Trump will or will not pull out of the landmark accord.

Most reports focus on the tragedy of him leaving, but some insiders fear the opposite: namely, that he’ll stay in and sabotage progress.

Gus Silva-Chavez is one of those. A longtime NGO observer, Silva-Chavez now runs the Forest Trends REDDX initiative, which tracks carbon finance – finance that depends on accurate measurements of greenhouse-gas emissions and reductions, as well as rigorous tracking of international carbon transfers.

It’s complicated stuff, but 99 percent of the work has already been done. Silva-Chavez, however, fears the Trump team will either complicate it even more or try to “streamline” it, which would undermine the environmental integrity of the system.

“They could go in and say, ‘The UN is not going to tell the US what to do,’” he says in an interview to appear on today’s episode of the Bionic Planet podcast. “They could say, ‘We don’t need an extensive, detailed rulebook. All we need are the basics, and we’re not going to agree to anything more.’”

That, he says, could slow the talks without formally appearing to do so, just as Republican strategists undermined civil rights while formally protecting “freedom”. Also, he adds, while the US stands alone now, any opposition could provide cover for other countries to also bail or stall.

“Right now, on the record, every country is saying the right thing: that they’ll toe the line,” he says. “But that could change if the US breaks its word.”

If that sounds far-fetched, we need just look back to the bad old days of the second Bush administration, which handed negotiations over to a previously unknown and famously unqualified congressional staffer named Harlan Watson.

After a five-month hiatus, the Bionic Planet Podcast resumes today with a short episode built around this article but featuring extended interviews and background information. You can check it out at Bionic-Planet.com, or on iTunes, TuneIn, Stitcher, and pretty much anywhere you access podcasts.

The Triumvirate of Obstruction

Watson was a human wrench tossed into the gears of global diplomacy by ExxonMobil for the sole purpose of grinding those gears to a halt. For that task, we was actually well-suited, and his name elicits such visceral feelings of disgust among those who were there that it probably warrants a trigger warning. The parallels to today are frightening: ExxonMobil inserted Watson into the Bush administration via a fax “which Exxon Mobil spokesman Russ Roberts said was sent by the company but not written by any of its employees,” as Washington Post reporter Juliet Eilperin put it – foreshadowing the daily doublespeak that Sean Spicer now spews at every White House presser.

Watson, along with Dobriansky and energy industry lawyer James Connoughton, formed an unholy Triumvirate of Obstruction that neutered the US on the world stage, and as an example, you can look to Bali: after months of stalling and flip-flopping, Watson said the US would only sign an agreement without targets or numbers because “once numbers appear in the text, it prejudges the outcome and will tend to drive the negotiations in one direction.”

After another collective groan from delegates, it was former US Vice-President Al Gore’s turn to speak.

“My own country, the United States, is mainly responsible for obstructing progress at Bali,” he admitted, but “over the next two years the United States is going to be somewhere it is not now….One year and 40 days from today, there will be a new (presidential) inauguration in the United States.”

He argued that even a watered-down agreement was better than nothing, so delegates passed an agreement that met all of Watson’s criteria, but Dobriansky still rejected it, prompting Conrad’s famous, exasperated retort and Dobriansky’s about-face.

As we all know now, Barack Obama won the next election, and his team incrementally helped shepherd the talks that resulted in the Paris Agreement – an incredibly flexible approach to fixing the climate mess that encourages a race to the top instead of binding targets.

Optimists like former Dutch negotiator Jos Cozijnsen point out that, from a rational perspective, the United States has no reason to either leave or torpedo the agreement.

“It’s not rational… and this is not Kyoto,” says Cozijnsen, who now advises environmental NGOs, referencing the Kyoto Protocol. “You can’t block anything anymore, and there is no reason for the US to do so.”

The Trump team, however, isn’t rational, either; and while they can’t formally block, they can gunk things up. Or they can get out of the way.

4 thoughts on “If Trump Bails On Paris Agreement, At Least He’ll Be Out Of The Way”