Creating the right policies, markets, infrastructure, and innovative connections is urgently needed to set a new course for sustainable, inclusive, and environmentally sound development. The bioeconomy of the Amazon is a promising pathway for the Brazilian Amazon. 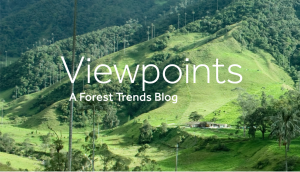 Attacks on indigenous territories by land grabbers have been increasing in recent weeks in Brazil. Land conflicts in general have reached a troubling milestone – 1,576 cases in 2020 – the most since the Pastoral Land Commission began recording in 1985 and 25% higher than the number of cases in 2019. Land invasions also broke records, more than doubling in 2020, with indigenous peoples representing 72% of recorded cases. This, combined with the resignation of Brazil’s Minister of Environment Ricardo Salles following allegations of illegal timber smuggling, further highlights how volatile and urgent things have become on the forest frontier of the Amazon.

The continued increase in deforestation and environmental destruction throughout the Brazilian Amazon is clear evidence that the path of development to date has been ill-conceived. However, both Federal and regional governments need to conciliate economic growth to benefit the millions of Brazilians who live in this vast region. The challenge and opportunity Brazil currently faces is to achieve this with private investments while promoting the overall conservation of the Amazon and supporting thousands of indigenous and other traditional forest communities.

Creating the right policies, markets, infrastructure, and innovative connections is urgently needed to set a new course for sustainable, inclusive, and environmentally sound development. The bioeconomy of the Amazon, or “Amazon 4.0” as it has been called by Carlos Nobre, member of the Brazilian Academy of Sciences, is a promising pathway for the Brazilian Amazon. The New York Times described this new pathway for the Amazon as harnessing the technologies of the fourth Industrial Revolution. As a prominent economic force and the world’s largest forest country, Brazil is strategically positioned to be a global leader in shaping and modeling a new way of doing business, a challenge and opportunity as countries slowly turn to post-pandemic recovery. 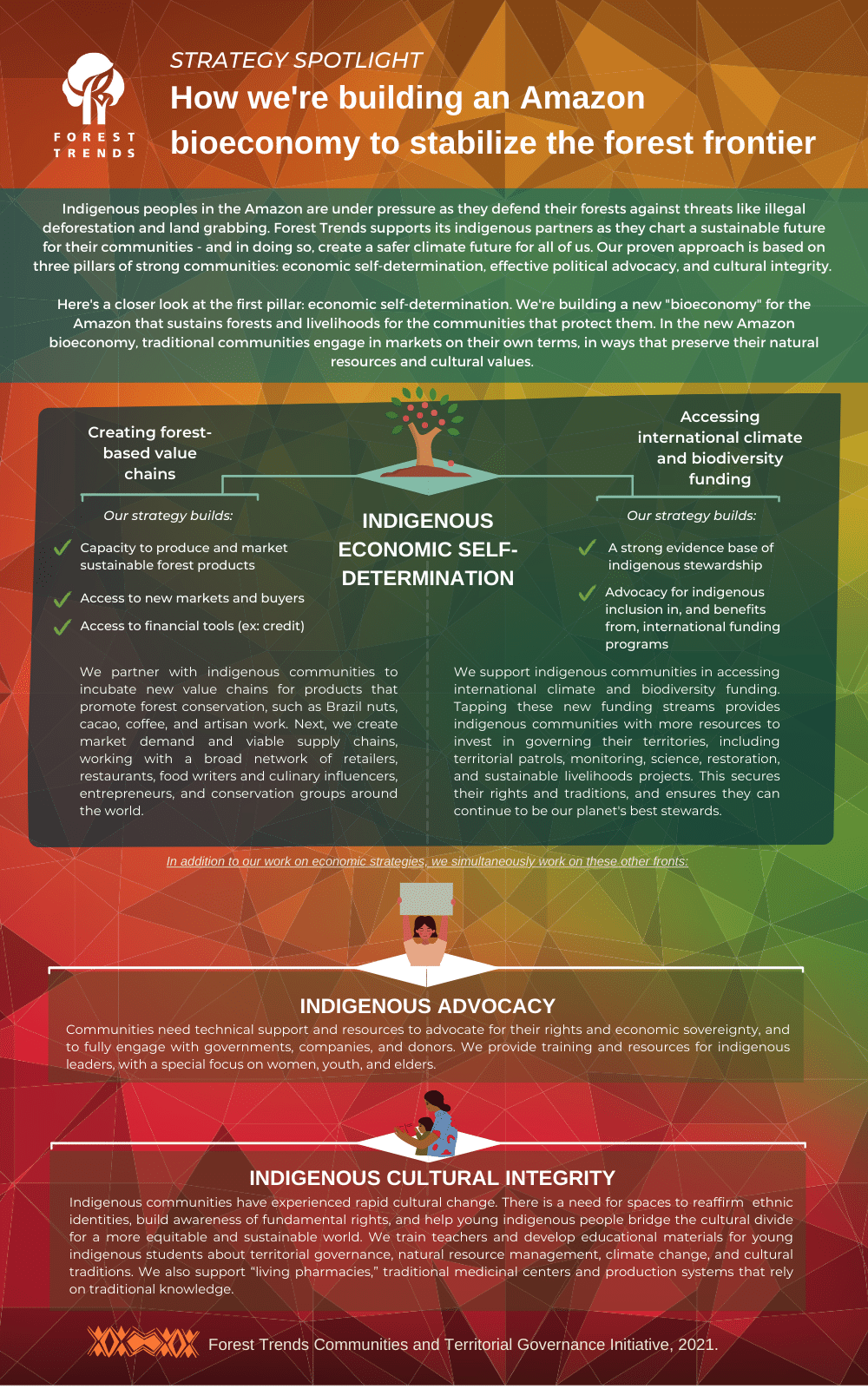 As deforestation rates continue to soar in the Amazon, regional governments are under pressure to control forest loss and deliver economic growth, both which currently rely primarily on forest conversion for agriculture and livestock production. This puts immense pressure on the forest frontier and the indigenous communities living on the other side. As the frontline against further forest loss, indigenous peoples are critical contributors to the conservation of intact forest landscapes, benefitting both biodiversity conservation and national climate commitments. Indigenous territories experienced 0.1% net carbon loss from 2003 to 2016 – the lowest rates of any protected area in the Amazon. One-third of the Amazon’s carbon stocks are located in indigenous territories.

Over two decades partnering with indigenous peoples has taught Forest Trends that long-term collaboration and supporting indigenous communities is the best way to stabilize the forest frontier – doing so both helps them defend their forests from illegal activities and strengthens sustainable forest economies of their choosing. There is a balance to be struck between land stewardship and its sustainable use, one that indigenous peoples around the world have practiced for generations.

Traditional Amazon systems have been based on diversity, not monoculture, taking advantage of a multitude of crops and wild-harvested foods, drawing carefully on different forest types and cultivated areas, and keeping the overall landscape intact. The “Amazon Bioeconomy” we are proposing mimics traditional Amazon management systems with potential to create a diversity of supply chains based on the incredible natural wealth of the region.

The current model relies on single-product economies, such as beef, soy, or palm oil. The consequences of failing to change this practice are dire and will only get worse, as highlighted in our recent report, Illicit Harvest, Complicit Goods, which showed that at least 69% of the tropical forests destroyed for agricultural commodities between 2013 and 2019 was done so illicitly, in violation of national laws and regulations. Now is the time to focus market and consumer attention towards products that sustain forests and the communities living there, rather than those that drive forest loss.  These are local strategies with global impact, creating direct, measurable benefits for forest communities, and a safer climate for us all.

Beto holds a Bachelor’s of Science in Conservation and Resources Studies from the University of California, Berkeley, and an MBA in Strategic Leadership from the Dominican University of California. Previously, he was Director of the Brazil Program of the Rainforest Action Network, promoting forest policies, community economic development and indigenous land demarcation in the Amazon region. He also worked for Aguirre International, evaluating environmental programs for AmeriCorp-USA and was the Manager of Sustainable Harvesting at Shaman Pharmaceuticals, developing ethnobotanical drugs from rainforest medicinal plants. As the Executive Director of Adopt-A-Watershed, he worked on watershed conservation through place-based learning methodologies. Beto also was a Program Officer with the Goldman Environmental Foundation, selecting finalists for the Goldman Environmental Prize and evaluating project proposals for funding. Beto has also consulted for Aveda Cosmetics, Conservation International, Instituto Terra, Occupational Knowledge International, and Wildlife Conservation Network, and others. He was co-chair of Grantmakers Without Borders and currently sits on the board of the Global Greengrants Fund, Earth Island Institute, and the Environmental Law Defenders Center. He is fluent in Portuguese, English, and Spanish.