6 October 2014 | As a boy, Tashka Yawanaw¡ watched as the culture of his people was nearly wiped out by outsiders. Now, he is the chief of those people, the Yawanaw¡, of the Acre region of Brazil, and Tuesday he will be a speaker at one of the largest conferences in the world, TEDGlobal 2014. […] 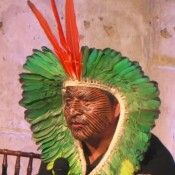 6 October 2014 | As a boy, Tashka Yawanaw¡ watched as the culture of his people was nearly wiped out by outsiders. Now, he is the chief of those people, the Yawanaw¡, of the Acre region of Brazil, and Tuesday he will be a speaker at one of the largest conferences in the world, TEDGlobal 2014.

Tashka joins the ranks of past TED speakers like Bill Gates and Jane Goodall.  The motto of TED is “Ideas Worth Spreading, with participant speakers sharing ideas in short presentations of 18 minutes of less. The conference this year, called “South!, takes place in Rio de Janeiro, Brazil, from October 6-10, and features more than 65 speakers and performers from all over the world, addressing a wide range of topics, from heritage food, samba music and painting favelas to cancer detection.

He will be the only indigenous person speaking at the conference, and he will tell the narrative of his own life and that of his community.

The Yawanaw¡ were nearly annihilated last century by rubber tappers and missionaries bent on exterminating the Yawanaw¡ spirituality and culture. Tashka left his community as a young man to study in the United States and returned determined to help his people recover from the near-fatal blow to their existence. Eventually, he became leader of the community.

Tashka and his wife, Laura, have worked to increase their territory, rejuvenate the culture, and form and grow socially and economically empowering relationships with the rest of the world. Tashka is particularly interested in developing a new model of sustainability that allows the group to protect their home, the rainforest, and engage with the outside world. Such a model is a valuable tool in response to the problem of climate change, a topic about which many people are confused, polarized, or entrenched in outdated ways of thinking.

In Latin America and the Caribbean, there are roughly 40,000,000 people who belong to close to 600 indigenous groups. Their stories, as yet untold, are heart-wrenching, profound, and at their core, hopeful, particularly as their worlds intersect with the issue of climate change.

Tashka speaks at TED just months before Lima, Peru, is set to host the international climate negotiations at COP 20, and global focus will laser in on identifying opportunities for climate policy and finance to align with other public and private investments and commitments with the goal of ensuring that forests and other ecosystems continue to provide critical support for stable climate and resilient societies.