It’s no coincidence that indigenous and traditional communities control one-third of the world’s remaining tropical forests, for these groups have long managed their forests in ways that provide sustenance without destroying the forest itself. To end deforestation, we must invest in them and their way of life. 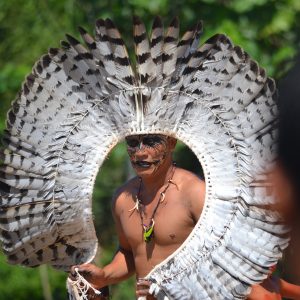 5 September 2019 | The Amazon is burning again, and has been for years – largely because of small farmers and land speculators clearing land to graze cattle or grow soybeans.

As a result, the region is dangerously close to the point of no return. A relatively small increase in deforestation could cause the entire Amazon to “flip” to a savanna-like ecosystem, according to scientists. That could alter rainfall patterns across South America, disrupt water supplies in Brazil, and decimate biodiversity we are only just beginning to understand.

This destruction is an economic problem, and fortunately we have economic solutions. Hundreds of companies have made ambitious public commitments to eliminate agricultural commodities associated with deforestation from their supply chains. Governments have contributed billions to carbon finance programs that pay forest managers to protect and restore natural carbon sinks. The European Union recently released a plan to keep commodities produced on deforested lands from entering European markets that may signal a shift to stronger trade measures in the future.

But a crucial piece of the strategy is missing.

To stabilize the forest frontier, we need to invest directly in the communities living there.

Indigenous and traditional communities control one-third of remaining tropical forests. Over nearly twenty years working in Brazil, we’ve witnessed that deforestation rates are significantly lower in the forests controlled by our indigenous partners than in surrounding forests.

We believe they are the best guardians of the forest, and the unrecognized frontline in climate action.

Strategic investments in forest-based enterprises in these communities create an economic engine that keeps forests intact. Relatively small injections of funding yield massive returns for the planet in terms of climate mitigation.

Together with partners including Original Beans, GoSol.solar, and Canopy Bridge, Forest Trends has seen similar success supporting value chains for honey, babassu (an alternative to coconut oil), açai berries, and wild cacao. These products can be cultivated and harvested without chopping down trees.

Strong forest-based economies are not limited to food products. The artisan sector, often dismissed as “women’s work,” is the second-largest employer in the developing world, and an incredibly important source of income for women. Thanks to long-standing support from the IKEA Foundation, we have focused on indigenous women’s artisan enterprises in the Brazilian Amazon as a cornerstone of our work.

Markets are not a panacea, and indigenous and traditional communities must be able to participate in markets on their own terms. There are still many communities striving to strike a balance between market engagement and their land, traditions, and well-being. Economic investment must be paired with support for communities to strengthen capacity to manage their lands and resources, advocate for their rights with often-hostile governments, and defend their territories.

Enforcement of the environmental laws already on the books in Brazil – which are some of the most progressive in the world – is the third leg of the stool. Efforts to weaken environmental legislation and the government agencies responsible for that legislation’s enforcement are extremely concerning.

But in fact, a strategy of forest-based economic development must be part of the solution to the Amazon. Such a strategy reduces the dependence of rural areas on economic support from the national government, and respects the sovereignty of the Brazilian people.

And, of course, small investments in community enterprises on the forest frontier yield incredible returns.

At the individual level, they increase incomes and create economic independence for women. At the local level, they strengthen resource governance and defense of local forests. Nationally, they support economic growth and contribute to countries’ emissions reductions and adaptation goals. And globally, we all benefit by protecting the most important carbon sink on the planet: the Amazon Basin.

From our perspective, that is an incredible return on investment. It is also a powerful lesson. For millennia, Indigenous people have created a carefully cultivated garden out of the Amazon, proving that it is possible to balance economic and ecosystem health. To stop deforestation, we can learn from that example, re-imagining an Amazon economy that thrives when its forests and people do.

Beto Borges is Director and Iza Hoyos is Manager of Forest Trends’ Communities and Territorial Governance Initiative (CTGI). CTGI partners with indigenous and other forest communities on innovations to secure their rights, livelihoods, and cultures, through a strategy built on advocacy, economic self-determination, and cultural integrity.