REDD+ can be great medicine for sick or endangered forests, but can it also act as a vaccine for healthy ones? Yes, it can – by supporting indigenous people, who act as a planetary immune system for forests. Doing so, however, means rethinking additionality, which is a pillar of carbon finance. 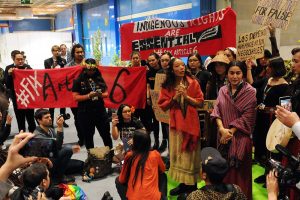 11 December 2019 | MADRID | Natural Climate Solutions have taken year-end climate talks by storm, with dozens of companies pledging hundreds of millions of dollars to saving forests and planting trees. With the pledges come calls for rigorous carbon accounting to ensure the money is actually generating the benefits people claim – accounting that could, if poorly applied, give short shrift to the forest communities that have long been the most effective guardians of the forest.

Indigenous and traditional communities control one-third of remaining tropical forests. In the Amazon, the largest tropical forest on the globe, they own 210 million hectares (or some 519 million acres). As a direct result of their stewardship, deforestation rates are just 0.2% on average, even less than that of protected areas (1.4%). Their stewardship keeps 51 GT of CO2 from being emitted into the atmosphere, a huge contribution to avoid and revert climate change.

Yet, their efforts to protect the climate, water and biodiversity is carried out at their own expense, a huge sacrifice, and often paying with their own lives, as seen in the killings of two more Guajajara Indian chiefs in the Brazilian Amazon. The United Nations Framework Convention on Climate Change, specifically the REDD‑plus mechanism, has not yet rewarded indigenous people’s stewardship of the worlds’ forests, de facto excluding local communities and their vast territories from directly benefiting from climate finance.

One reason is that these programs are only designed to save forests that are in immediate threat of destruction. In carbon market parlance, a project has to demonstrate “additionality”, meaning it has to show that the carbon money will make the emission reduction possible.

That makes sense in energy – where you can easily calculate the money needed to build, say, a renewable energy plant that replaces a fossil-fuel installation – but it’s not always so clear in forestry. As a result, REDD+ finance ends up being targeted to the known vectors of deforestation, but bypasses the indigenous people who are sustainably managing and protecting the forest further away.

This is a critical mistake, because these people and the forests they protect are still under threat, and have been long before the ascension of Jair Bolsonaro as President of Brazil.

Expand the Reach of REDD+

By sticking to rigid rules of additionality, we ignore the invisible threats to all forests – threats that exist in backroom deals and secret strategy sessions and only become visible after forests have erupted in flame, as those of the Amazon are now, or been laid low by chainsaws.

Many of these forests are now under the protection of indigenous people, and that protection is often backed by law. Article 231 the Brazilian Constitution, for example, guarantees the right of indigenous people to own and manage their territories for their exclusive use, and they have consistently proven themselves to be good stewards of the land.

Indeed, indigenous people have kept deforestation rates in their territories around 0.2 percent, which is far below that of the rest of the country and one-seventh the rate in other protected areas. Their legal right to manage the forest is under threat, and REDD+ finance can be used to bolster those rights.

Look at it as a sort of preventive medicine.

This story is published as part of Covering Climate Now, a global journalism collaboration strengthening coverage of the climate story.