The Intergovernmental Panel on Climate Change this week issued its most dire warning on climate change, but the report also says we still have a chance of stabilizing global temperatures after first overshooting above the Paris Agreement’s 1.5-degree target. 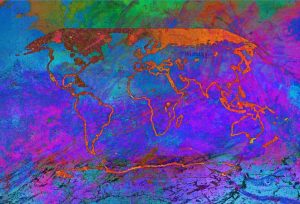 Photo: ‘Changing’ by the artist Alisa Singer “As we witness our planet transforming around us we watch, listen, measure … respond.”

11 August 2021 | The Intergovernmental Panel on Climate Change (IPCC) had a simple message for the world this week: “Climate change is widespread, rapid, and intensifying,” is how it unveiled the first installment of its 6th major assessment report.

Specifically, we’ve pushed carbon dioxide to levels not seen in 2 million years, and we’ve driven temperatures to levels not seen in more than 125,000 years – and, yes, it’s clearly we who are doing it and not sunspots or other natural phenomena. The science is “unequivocal” – another term the IPCC used for the first time.

Beyond the doom and gloom, however, there’s a bright spot: temperatures will stabilize somewhere between 1.5 and 2 degrees Celsius over pre-industrial levels if we get to net zero emissions within the next few decades, and they can fall back if we scale up both natural and technological systems for removing greenhouse gases from the atmosphere – from carbon sequestering trees to industrial carbon capture and storage (CCS) technology.

It might be too late to prevent the seas from rising, but it’s not too late to save civilization.

If we do nothing, however, the planet’s living ecosystems will lose their ability to mop up greenhouse gasses, and our agricultural economy could collapse.

None of these findings are new, and they’re even a reason groups like the Net Zero Asset Managers initiative are pushing corporate pledges to achieve “net zero” emissions by 2050. At net zero, companies have decarbonized to the extent possible and are offsetting residual emissions through removal mechanisms like tree planting and CCS.

The danger, of course, is that companies will fixate on 2050 with the aim of starting to reduce in 2040 instead of now. That’s why those pushing for pledges are also calling for interim reduction targets.

These groups, however, are also giving short shrift to the concept of “carbon neutrality”, which is a critical tool for accelerating reductions to net zero.

Carbon neutral is where companies can be now, while they’re still in the process of decarbonizing on their way to net zero.

While net zero means eliminating fossil fuels and then only using offsets that remove greenhouse gases from the atmosphere, carbon neutral means companies are offsetting while they transition to new technologies, but they’re not limited in the types of offsets they can use. Instead of only using offsets that remove greenhouse gasses from the atmosphere, they can also use those that reduce emissions elsewhere – by, say, protecting endangered forests or funding low-emission technologies.

The two approaches are, in other words, not mutually exclusive and can run in parallel. Ideally, a company that is on a net zero aligned pathway to reduce its own emissions to the extent possible by mid-century will purchase offsets along the way to be carbon neutral in the near term.

This is critical, because it’s easier and cheaper to prevent these gasses from getting into the atmosphere now than it is to suck them out later. Natural climate solutions are still key, because human management of forests, farms and fields generates nearly a quarter of all man-made greenhouse gas emissions.

Those who ignore – or, in some cases, actively oppose – the use of carbon credits to become carbon neutral in the near-term often do so because they feel it’s a distraction from the ultimate goal of achieving net zero emissions.

It’s a way of getting there sooner.

Steve Zwick is a freelance journalist and produces the Bionic Planet podcast. Previously, he was Managing Editor of Ecosystem Marketplace, covered European business for Time Magazine and Fortune Magazine, and produced the award-winning program Money Talks on Deutsche Welle Radio in Bonn, Germany.