India will ban firms from exporting carbon credits until the nation meets its climate goals; Hon’ble Cabinet Minister (Power, New & Renewable Energy) told lawmakers debating changes to the country’s energy conservation law on Monday. This brings more confusion to the carbon market. There is a need to have a clearer pathway under the carbon market. Author’s observations are discussed in the article. 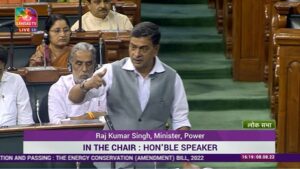 10 August 2022 | With the passage of the Energy Conservation (Amendment) Bill, 2022, the domestic carbon market is becoming a reality. However, this also brings in many question marks. The statement from the Hon’ble minister regarding restrictions on the export of carbon credits will be the major focal point in the planned launch of India’s carbon market.

There are few of the areas we must need to look into i.e, first as the Energy Conservation (Amendment) Bill, 2022 intends to bring in the energy segment under the carbon market, it appears that the export ban of carbon credit may be immediately impacting the credits generated from the renewable energy sector; many of which are of low-hanging fruits. Projects under the renewable energy segment, including wind and solar, may cease generating any carbon credits post-2020. The authority may propose a new framework which will make many of the existing low-hanging RE projects ineligible under the domestic carbon market. If permitted, it will immensely impact the sustainability of credits from PAT and REC, considering the current ambition of integrating PAT and REC under a new carbon market framework. Today in India, the demand for carbon credit from the voluntary market segment is very limited, and any policy flexibility of allowing low-hanging carbon credits at par withPAT and REC under the existing market segment; will pull the price of REC and ESCerts (Energy Saving Certificates) down. Thus, the policy framework should need to distinguish the credits from the different segments and create a pathway to integrate all the credits with a timeline of 5 to 10 years. Unless the proposed future carbon market framework is not flexible in accommodating voluntary carbon market standards, many projects under the voluntary carbon market standard will cease to exist. Thus, a significant testing phase will happen during the next few months to test the market’s fair, credibility and sustainability.

The second is on credits generated from forestry, waste management and transport sectors. Although the proposed bill limits renewable energy and energy efficiency sectors , it is clear that other sectors may need to pass through the same test of export ban considering India’s updated NDC targets reduction of emissions intensity of GDP by 45 per cent by 2030, compared to 2005 levels. These issues will be assessed during the next few months under the corresponding adjustment. The testing phase is how these sectors will be accommodated in the new future and under what provision.

The third point is what will be defined as a carbon credit in the context of India. As per the bill, “carbon credit certificate” means the certificate issued by the Central Government or any agency authorised by it under section 14AA. With the emergence of many voluntary carbon market standards and players and overnight new players declaring a new standard/platform/registry, it will be a critical phase to redraw the eligibility criteria for defining carbon credit certificates. The carbon market has failed due to credibility issues despite its novel intention, and thus the foundation of India’s carbon market has to be based on credible carbon credits. With Article 6.4 becoming the front runner in kick-starting the carbon market under Paris Agreement in the near future, and many of the CDM components may be the choice during this transition, India’s carbon market framework will also closely follow the safest pathway in following the multilateral framework and guideline aligning with A6.4.

The final point is that the message on the export ban of carbon credits may not have been intended for sectors where large investment is needed through carbon financing. However, the generalisation of the export ban statement in its spirit may hamper India’s current stature as one of the preferred investment destinations for the realisation of quality carbon credits. With billions of Dollars of investment commitment to qualitative and impact carbon (where government incentives are hardly present), the government should try to bring much clarity to these sectors. Today there is immense demand for community-led and nature-based solutions where the private sector and communities with investment from impact funds aim to reduce tremendous greenhouse gas emissions. Many of these sectors, such as cookstove or soil carbon in the agriculture sector, are immensely thriving and changing the rural landscape and ecosystems. Although the current bill doesn’t have any provision to limit the existence of carbon credits, there is an immense threat if we should not bring in a very detailed and consistent policy framework during the course work of the drafting of the carbon market framework. And we should not generalise the carbon credits for each sector as one. We must note that there is not much demand in India for quality carbon credits considering small players who will offset their carbon emissions. Thus, we should facilitate a supportive policy framework in the sectors where government intervention and engagements are minimal, which will help large investment flow for mitigating GHG emissions from these sectors.

As Managing Director, Niroj leads a global team that is responsible for all aspects of CCX business in the field of climate change and sustainability advisory and asset management.

Mr. Niroj Mohanty has over seventeen years of experience in developing and financing projects in the field of climate change mitigation/adaptation, biodiversity challenges, natural resource management, and renewable energy field. Inspired by the potential companies have in helping to transition to a Net Zero World, Niroj has been developing solutions for clients that significantly reduce their carbon footprint and help them in adapting to the challenges associated with climate change and provide social benefits to the surrounding communities.

Niroj received his MBA from NITIE, Mumbai with concentrations in Industrial Safety & Environmental Management (MBA) and his Bachelors of Technology in Textile Technology from ITT Choudwar, Utkal University, India.