If we stick to the Paris Agreement, the global economy should grow $336 trillion in the next 80 years. If we don’t, it could shrink by $600 trillion. 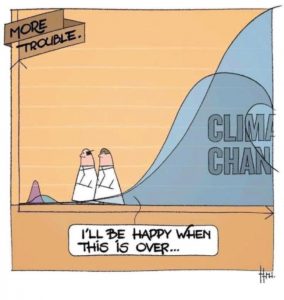 17 April 2020 | It’s not quite a gazillion or a bajillion, but a quadrillion dollars still sounds unreal – like the numbers second-graders make up when bragging about the pennies in their piggy banks.

But $1 quadrillion is a very real number that translates into a thousand trillion, or more than 100-times the $9 trillion the International Monetary Fund says COVID-19 will cost us over the next two years.

$1 quadrillion is also what researchers say climate change will cost us over the next 80 years if we fail to meet the terms of the Paris Climate Agreement, according to new modeling published this week in the journal Nature Communications.

That translates into $12.5 trillion per year over 80 years, or more than twice per year what COVID-19 is hitting us with now. The difference from the perspective of a middle-aged geezer like myself, is that while COVID-19 is primarily hitting our parents and grandparents, climate change will hit our children and grandchildren.

In the paper, which is entitled “Self-preservation strategy for approaching global warming targets in the post-Paris Agreement era,” climate researchers, led by a team from the Beijing Institute of Technology’s Center for Energy and Environmental Policy Research, simulated the costs of dealing with climate change under several scenarios and concluded that if we prevent the world from warming by 2°C, which is the bare minimum target of the Paris Agreement, then global GDP will increase by  $336 trillion over the next 80 years. If we keep it from warming 1.5°C, it will increase $422 trillion.

But if we fail to meet the Paris Agreement goals and instead just stick with the national action plans (NDCs, for “Nationally-Determined Contributions”) already submitted, we’re looking at economic shrinkage of anywhere from $126 trillion to $616 trillion.

We’re looking, in other words, at an average annual GDP loss of 0.57 percent annually, or a perpetual state of recession for the next 80 years – and that’s if countries meet their NDCs. If they don’t, then the loss plunges to $790 trillion—which is more than seven times the size of the current global economy.

Obviously, we’ll see a rebound first – a bit of a respite after we recover from COVID-19 but before the rising seas and burning trees really start hitting us – and this is when the tough decisions begin, because the Intergovernmental Panel on Climate Change (IPCC) tells us that we’ll have to reduce greenhouse-gas emissions an average of 7 percent per year between now and 2030 if we’re to have any hope at all of meeting the Paris targets.

As with COVID-19, we can’t say they didn’t warn us. Just as climate scientists have long been sounding the alarm on greenhouse-gas emissions, so too has the World Health Organization (WHO) been warning us of a global pandemic. Indeed, WHO Director General Tedros Adhanom Ghebreyesus used the outbreak to remind us way back on February 3 that an ounce of prevention is worth a pound of cure.

“For too long, the world has operated on a cycle of panic and neglect,” he said. “We throw money at an outbreak, and when it’s over, we forget about it and do nothing to prevent the next one.”

If we burn the climate, there won’t be a next one.

NOTE: If anyone knows the artist who created this cartoon, can you please let me know? I’ve been holding off on using it for weeks because I haven’t been able to reach the artist, but it illustrates the situation better than anything else I’ve seen.

Coronavirus Is Bad, But The Green Swan Is Worse