As drought, flooding and pollution made headlines year-round in 2016, some experts and organization pushed for a return to the basics, solutions that mimicked nature or protected water at its source, while also developing innovative new finance models to fund the mounting costs water management requires. 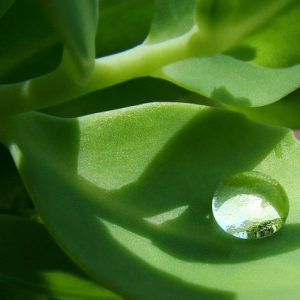 28 December 2016 | In early 2016, the World Economic Forum ranked the water crisis as one of the top threats facing society after listing it as the number one threat in 2015. Water was also central to the Paris climate talks, while the United Nations dedicated Sustainable Development Goal number six to water and sanitation, and the Sioux people of North America put the previously unknown town of Standing Rock on the global map by standing up to protect their water rights.

Fortunately, scores of efforts are underway to meet the challenge, and the Electric Power Research Institute started off the year with a review of its Water Prize-winning Ohio River Basin Trading project. A January webinar outlined a multi-pronged strategy that includes promotional videos and impact investors rather than donor-based finance.

Using the project’s funding, Midwest farmers such as Ken Merrick have been able to implement conservation activities to reduce fertilizer and animal waste from running into nearby waterways that flow to the Gulf of Mexico. Merrick, who operates Conser Run farm in Ohio, added a storage area for manure and a buffer strip where his cows are only occasionally allowed to graze. He also lets trees and grasses grow along the creek running through his farm, which mops up excess pollution before it reaches the water.

The program is still in a pilot phase but, if it evolves as planned, Ohio River farmers can quantify their pollution reductions and generate stewardship credits using a market-based approach called water quality trading. They can then sell these credits to power plants and wastewater treatment facilities interested in meeting sustainability goals or to comply with regulatory requirements.

Water quality trading made headlines in 2016 after an organization called Food and Water Watch penned a paper in late 2015 condemning the entire practice and re-labeling it “pollution trading.” The group charged that it undermines the Clean Water Act (CWA) and puts US waterways at great risk. Advocates of the practice dismissed the paper in August arguing trading is one of several tools states and utilities can use to improve water quality.

“Trading isn’t a silver bullet. It’s not a panacea,” Brad Klein, a Senior Attorney at the Environmental Law and Policy Center says. “But we need to get on top of this issue of water pollution and water quality trading may be another arrow in the quiver.”

This debate between the two camps exposed a bigger question: why doesn’t an independent third party review of water quality trading, determining if the practice is indeed successful in improving water quality, exist?

The trading space says there are enough case studies to draw from for an impartial scientific evaluation.

“As far as determining if trading is going to have environmental outcomes that are useful and increase efficiency and lower cost, I think there is enough experience right now to have that assessment,” said Jessica Fox, who heads up the Ohio River Basin Trading project at EPRI.

Many view water quality trading as an innovative way to finance conservation activities that result in water quality improvements. In 2016, organizations looked at a few other inventive ways in which to get the job done.

“We need to get smarter about how we use every drop of water,” Brian Richter, lead report author and Chief Scientist for the Water program at TNC, said when the report launched. “We can no longer build our way out of water scarcity. The closer water consumption grows toward the limits of water availability, the more we put ourselves at risk. But new approaches in water management can shift us toward long-term sustainability.”

Essentially, these partnerships solicit investor capital to acquire a portfolio of water rights. Most of these rights are either leased or sold back on the market, giving investors a financial return and ensuring farmers and cities have access to enough water. A WSIP can acquire water rights by outright purchases, but also by collaborating with farmers to implement water saving measures in irrigation.

Both of these methods free up water rights allocations to be used to divert water back to nature, restoring water flows in a manner that sustains healthy ecosystems.

Also over the summer, the water fund, another innovative way to finance and implement watershed restoration got a boost in Ecuador when California-based nonprofit Nature and Culture International established Ecuador’s first water school, which will train municipal water workers in the skills required to join and administer a water fund.

“The water school is a tool to scale up and replicate a successful payment for environmental services model to provide clean abundant water to thousands of Ecuadorians while helping conserve Ecuador´s incredible biodiversity,” Renzo Paladines, NCI Ecuador’s Executive Director who also serves on FORAGUA’s board of directors, said in a statement.

Later in the year, the World Resources Institute released a study on watershed investment programs in the United States in an effort to increase knowledge-sharing among regions and programs. The report not only showcases success stories in Denver, North Carolina and Flagstaff, Arizona, it also identifies potential solutions to well-known barriers such as raising initial capital for program developers. For instance, report authors note specialized green bonds to finance urban water infrastructure are gaining traction, and a San Francisco-based startup is pushing a forest-resilience bond to address fire and water woes in California.

Also on watershed investments, Ecosystem Marketplace closed out 2016 by publishing its semi-annual State of Watershed Investment report, which this year focused on payments for green infrastructure for water. The report tracked significant growth in 2015. Governments, water utilities, companies, and communities around the world paid nearly US$25 billion for nature-based solutions to secure reliable access to clean water.

A Year for Nature

Nature was indeed at the center of some high level discussions and policy-making throughout the year. The profile of mangroves, for instance, continues to rise as people, particularly carbon market actors, realize they’re carbon storing and storm fighting potential. Ecosystem Marketplace explored this potential on World Wetlands Day in February.

In July, Peru’s Ministry of Environment issued formal regulations for the country’s Mecanismos de Retribución por Servicios Ecosistémicos (MRSEs), or “Mechanisms of Compensation for Ecosystem Services” law, which essentially is a legal framework for harnessing public and private finance for conservation activities.

In the corporate world, Coca-Cola announced it met its water replenishment goal five years early during the annual World Water Week in late August. For the most part though, companies are still figuring out concepts like water neutrality and water stewardship. NGOs such as CDP and WWF are offering their expertise and encouraging businesses to set targets on their water use.

Nature also came up during conversations in 2016 for managing water-related disasters such as this year’s Hurricane Matthew that hit hard parts of Haiti and the southeastern US among other areas. As the frequency of these weather events increases, developing with nature in mind is more critical, said Environmental Defense Fund’s Paxton Ramsdell. In November, he noted how broad vegetated buffers of a stream restoration site significantly reduced flooding near Raleigh, North Carolina.

And what new methods and tools are water practitioners planning to unveil over the coming year?

We’ll have to wait and see.